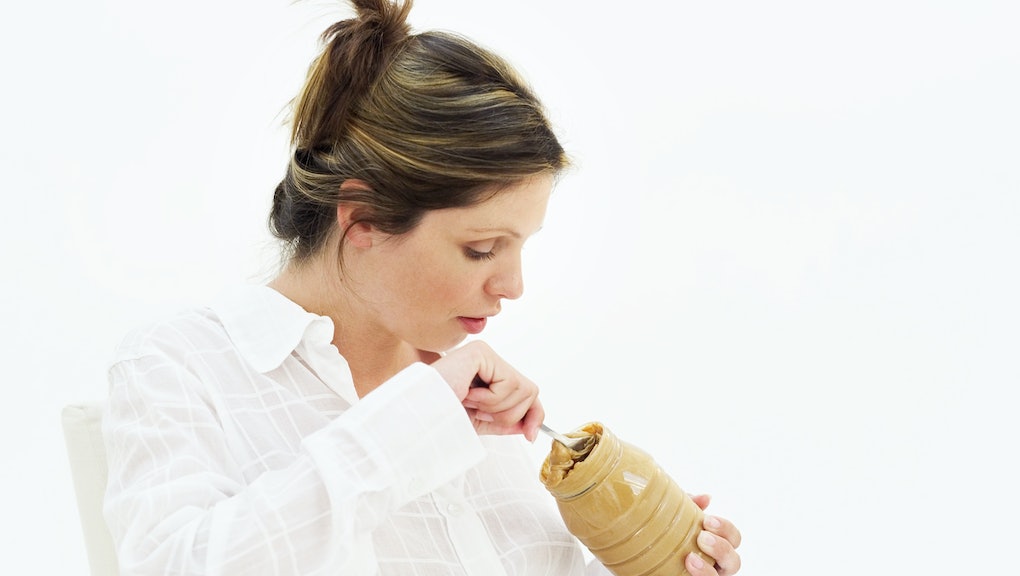 When the Hell Did Everyone Become Allergic to Peanuts?

A long time ago, there was something called the peanut butter and jelly sandwich.

The simple but elegant lunch, consisting of peanut butter, jelly and two slices of bread, was once a staple of school cafeterias from coast to coast. With around 376 calories, the old standby was nutritious too, coming with roughly 20% of the daily recommended value of vitamin E, more than a quarter of folate and 42% of niacin, SFGate reports.

But no more. As peanut allergies have risen in recent years, the old standby, as well as all peanut products, have become a scarcer sight in American schools.

'We're peanut-free here because we've had children who are very much allergic to it," Danielle McCann, the director of Little Years Daycare, told Mic. Aside from teaching, faculty staff doubled as veritable peanut police, she said: "Every teacher has been trained to check every snack and read any ingredient before anything is given out to children."

Like all allergies, peanut sensitivity is the result of an incorrect immune response. Unlike most allergies, however, peanut-related reactions routinely kill dozens each year, and even lesser cases can result in hives, itching, wheezing, coughing, shortness of breath, vomiting and fainting. Today, the standard procedure for a severe peanut attack requires a shot of epinephrine delivered immediately through the thigh in the form of a large syringe popularly known as an Epipen.

McCann estimated her daycare center accepted "at least three" new students each year with allergies so severe that a blanket ban on peanuts (which are actually not nuts, but legumes) was the only option.

"It's too much of a risk to take when it comes to children," she said.

Peanuta non grata: Nobody knows for sure what is causing the increase in peanut allergies, and the only real point of consensus is that the problem is getting worse. After barely meriting a word in medical literature before the 1980s, incidents of peanuts allergies began to creep up in the 1990s. "Allergy to peanuts and tree nuts is the leading cause of fatal allergic reactions in the United States, and the prevalence appears to be increasing," a 2010 study in the Journal of Allergy and Clinical Immunology reported. The study found the number of children with documented peanut allergies had increased from 0.4% in 1997 to 0.8% in 2002 to 1.4% in 2008.

"The numbers have doubled in the past 10 years," Dr. Julie Kuriakose, an internist at Hudson Allergy and clinical instructor of medicine at Columbia University, told Mic. "I don't think that there is just one answer."

According to Kuriakose, one possible explanation is the so-called hygiene hypothesis. The idea goes that in the past, U.S. children were exposed to more everyday bacteria and viruses, which may have stimulated healthy immune responses. Today, by contrast, with ever greater advances in hygiene, the theory goes that the immune system has less to do and lashes out at more banal things — like peanut proteins — in an attempt to stay relevant. Kuriakose and other experts said peanut allergies were less prevalent in developing countries partly for this reason.

"We're not growing up in families where there are six children and living on farms and having exposure," said Kuriakose.

Other theories have speculated that an overabundance of folate in children's diets is to blame, while a 2011 study from the academic journal Allergy, Asthma and Clinical Immunology suggested the answer may lie with a vitamin D deficiency.

With no solid explanation for their exponential growth, best practices for treating peanut allergies has also swung widely in recent years. According to Kuriakose, it was once common to tell pregnant mothers to completely avoid peanuts and keep their homes nut-free if there was a past genetic history of food allergies. That changed with a study this year in the New England Journal of Medicine which found exactly the opposite.

"The early introduction of peanuts," researchers concluded, "significantly decreased the frequency of the development of peanut allergy among children at high risk for this allergy and modulated immune responses to peanuts."

Despite the advances, there is still little to be done once the allergies are present. "Eighty percent of children who are diagnosed with peanuts allergies will keep or retain that peanut allergy into adulthood," said Kuriakose, who also had some prophetic words for the future of her own profession, allergy treatment. "I don't think we're a dying field, I will tell you that."