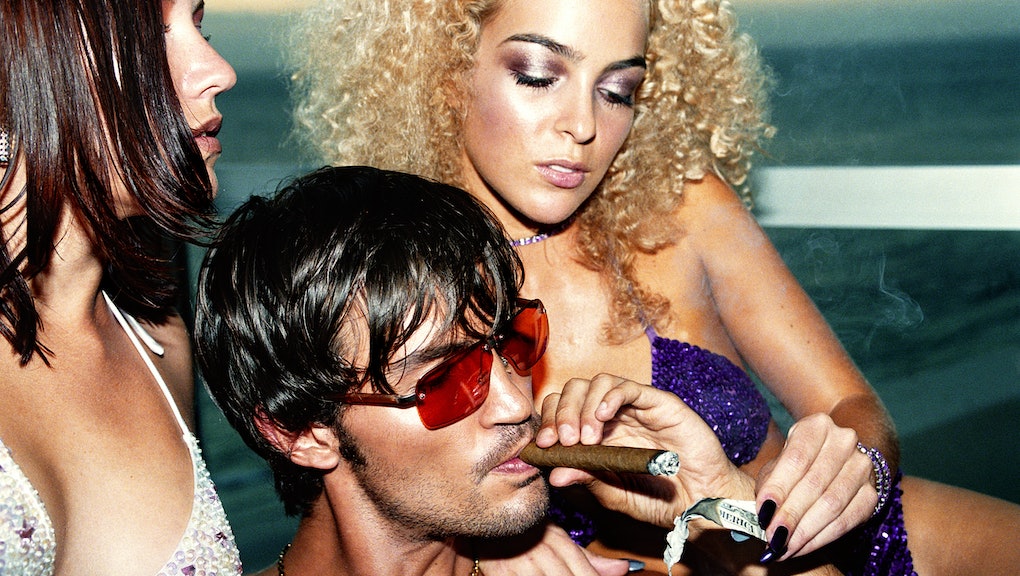 7 Tips on Gender Relations, According to Men's Rights Activists and the "Manosphere"

Impressionable young men who have been romantically spurned for one reason or another often turn to the Internet for answers. What they'll find there can be disturbing.

The various websites of the Manosphere are primarily defined by their outlook on masculinity or, as progressive site RationalWiki calls it, their "collective obsession with feminism and the weird way in which they express both a strong desire and a profound distaste for women."

Central hubs of the Manosphere include websites like A Voice for Men, a website run by a "deadbeat dad" turned anti-feminist activist named Paul Elam and pick-up artist communities like /r/TheRedPill, a corner of Reddit where angry young men and pick-up artist gather to swap strategies and talk about why women are so weak and emotional.

They are collectively responsible for some of the world's worst misogynist trolling, from submitting fake rape reports to universities to protest a new anonymous rape reporting system to defending accused murderers  because the justice system is biased against men.

Here are some of the strange bits of advice you might pick up while trawling the Manosphere.

1. If women can't take the heat, they should go back to the kitchen.

Women, man. Always unfairly accusing MRAs of harassing them on Twitter when all they've done is turn every online discussion into a screaming match filled with rape and death threats.

An MRA posting under the name "coranewbold" on a blog called Men's Rights Quincy sums up the MRA attitude toward debating with the fairer sex online: "When you use a [Twitter hashtag], you're starting a conversation with that tag, meaning everyone within that thread has full-fledged authority to comment on it. This means not just the ones who agree with you, be prepared to fight off the ones that don't agree with you and embrace yourself for anyone who is going to go wild on you."

"You have every right to say WHATEVER you want about it, but once you apply that mark, you cease to be talking about it and are initiating a conversation with people associated with it," coranewbold writes. "Don't like it? Tough [...] If this 'harassment' is so stressful, why [do women] voluntarily put themselves through it?"

The only thing worse than a feminist is a "beta" male, which Manosphere hub Return of Kings describes as a man plagued by "insecurity, fear, stagnation and all-around softness" whose "trivial fears have been hardwired into [their] emotional brains over long periods of time."

On the other hand, alpha males think like a pack leader. While beta males are intimidated by women, alpha males know how to assertively take charge of any situation.

The best way to become an alpha male is to pay $27 (usually $75) for an online self-help guide promising to help you "build confidence ... become fearless ... get jacked ... achieve goals." Don't think too hard about it. Just dip your head (and your wallet) right into that online community of other angry men trying to reverse their fortunes with manly platitudes. What could possibly go wrong?

"We must save the alpha males before they are extinct," Breitbart's Lisa de Pasquale writes.

3. Love is a battlefield, and women are the enemy.

"The average young woman today is less concerned about the number of quality men who would commit to her than she is about the number of men who retweet a photo of her breasts," explains a primer to the Manosphere on Men Going Their Own Way. "The Manosphere is the Big Bang of chaotic masculine disruption that will eventually bring into existence a new personal world of freedom for those who choose to be free."

This meme from A Voice for Men's Facebook page demonstrates all the evils feminist activists are fighting to impose upon men.

Over on /r/TheRedPill, one of the most upvoted posts explains how to verbally put a woman in her place.

As one dives deeper into the Manosphere, it becomes clear the root of the conflict between men and woman is at least partially innate. Here are some gems from a pinned "list of generalizations which embody fundamental beliefs of the red pill philosophy" on /r/TheRedPill, most of which are aggressive statements meant to demean women.

Women are irrational and inconsistent, they have a capacity for logic but it is not their modus operandi, that is to say that they must exert effort to be logical as it is not their factory setting. A logical woman is easily baited into becoming emotional; women are easy to compromise. Their decisions are based on their current emotional state rather than the abstraction of logic. It's this proclivity to change so quickly which causes them to act inconsistently and in contradiction.

In an archived A Voice for Men post from 2010, men's rights figurehead Elam suggested retaliatory domestic violence was "not wrong" and proclaimed October "Bash a Violent Bitch Month":

On a more recent post from A Voice for Men, prominent MRA lawyer Roy Den Hollander argues the emasculation of U.S. men will turn into an actual war: "There is one remaining source of power in which men still have a near monopoly — firearms. At some point, the men in this country will take the Declaration of Independence literally."

In a post applying the mutually assured destruction logic of nuclear warfare to gender relations, prominent anti-feminist writer Roosh V opines men looking to live in a society with traditional gender relations should apply what he calls the DEFCOCK system to potential countries of residence.

DEFCOCK goes from DEFCOCK 5, "completely normal male-female relations in a patriarchal society that believes in a binary gender system"...

...to DEFCOCK 3, where "women have gained masculine traits and delay monogamy to launch a meaningless office career while experimenting with over 25 local and foreign penises"...

...to DEFCOCK 1, countries with a "complete absence of traditional sex roles" and with the "institution of marriage reduced to farce."

"Each man has his own preferential DEFCOCK level that gives him the freedom to pursue sexual relations with women who still look and act like women," Roosh V writes. "It's obvious to me that DEFCOCK 3 and 4 provide a band of pleasure and happiness for the average man to live life on his own terms while pursuing a variety of relationship types."

To really act like a hardcore member of the Manosphere, you'll need to read up on evolutionary psychology — the study of how observable psychological traits might be the result of how the human race evolved.

Even more nuggets of Darwinian wisdom emerge on /r/TheRedPill. One member seems to have solved just why women evolved to be so hysterical.

I agree with this. From my experience, when a woman feels attracted to a man, she will first display submissive, good girl behaviors to charm him. He will consider her practical, cute, harmless and attractive. However, as soon as the man has the lay, she will start and try to take back the territory by voicing expectations. If they aren't immediately met, she will go through emotional outbursts to trick the peace loving, relaxation seeking man into doing all kinds of stuff for her, just so that she's quiet again. It all makes perfect sense if you see it as bio-programming that solely serves procreation.

This guy's friend, who is handling a "large settlement" because women can't be trusted with it, has cracked why dames are so indecisive:

While incredibly intelligent, he comes off a little sheepish but is handling this settlement like a fucking boss. We were having a casual conversation about life, money, and the fact that he was named to settle the trust by the deceased specifically because women are A) catty and will fuck each other over and B) cannot make a decision and stand by it.

This theory received enthusiastic additions in the comments section:

This young Freud has nailed what's behind "girls with daddy issues":

Once you start applying evolutionary psychology to the study of women, you just might not be able to stop:

6. Remember that men were the ones who built society

In a post that gave anti-MRA blog We Hunted the Mammoth its name, a Redditor named TheGrendler lays the case for women just owing men everything, including the notion that "we hunted the mammoth to feed you."

We men built a nice safe world for you all the the coal-mines of death, roads, railroads, bridges and tall office buildings. Its $1,000,000 spent per death of a man on a large dangerous project on average now you can just 9-5 it and call it a day in air-conditioned and heated safety. Forget about the wars we died in and the sacrifices made just ignore history or is it now hersorty? You are accruing the benefits without ever having to pay the price you still don't have to sign up for the draft and who will protect you? The Sex and the City girls will fight off the North Koreans with their Manolo Blahniks?

7. When you realize you can't win, cut ties and lose it.

Sometimes a broad just won't budge. Maybe she's trying to bilk you in a divorce, or had the temerity to get a job promotion you think you deserved more. Perhaps she just rejected you — how dare she!

And as for all those women who rejected you, your last resort is your best resort: Double down on all the bitterness and rage in your heart for decades. If you pull this one off right, you can live a woman-free life until ripe into your middle age:

Follow the advice of the Manosphere for a life well lived.