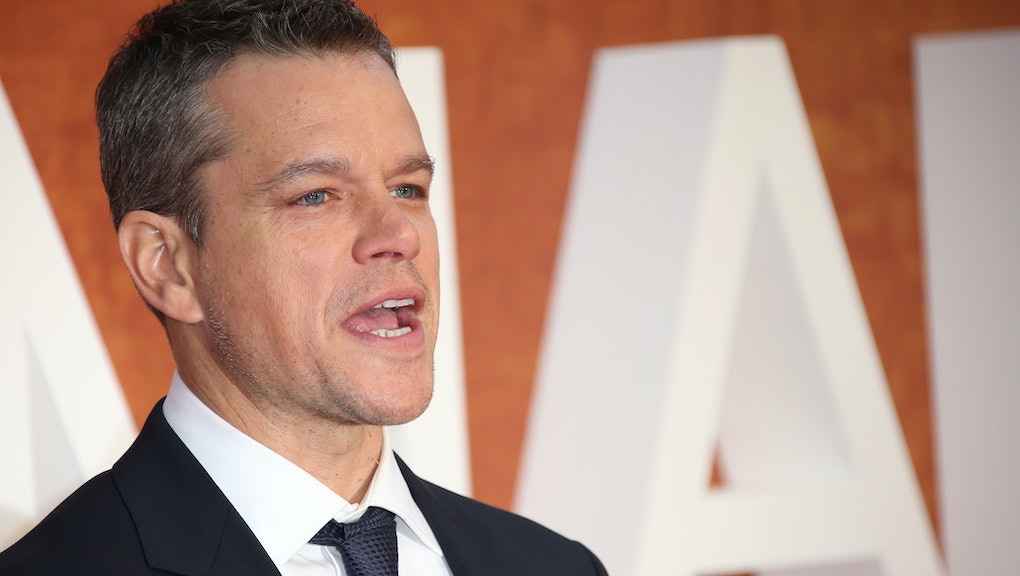 Matt Damon's autumn is not off to a good start. In the span of two weeks, the actor made boneheaded comments about diversity in film and also LGBTQ actors staying in the closet. Suddenly, the affable, likable actor is a cultural punching bag, and he's only digging himself further into his own hole.

As "Damonsplaining" becomes a verb — with the hashtags to go with it — questions remain. Why are Damon's comments provoking such rage and disappointment? From where within Damon are these comments coming? How could such a liberal actor be so dim on the issues of diversity and being queer in Hollywood?

Perhaps most importantly: Why won't he just listen?

"Hoo. Wow. OK." On the season premiere of Project Greenlight, Damon and Ben Affleck's HBO show searching for the next great young filmmaker, Damon got in an altercation about diversity in film. Producer Effie Brown insisted on considering nonwhite, non-male directors for the team's chosen project. Damon talked over her, insisting diversity was about "the casting of the film," not who's behind the camera. The clip went viral.

Damon did apologize for the comments, but even then, his statement didn't quite hit the mark. "My comments were part of a much broader conversation about diversity in Hollywood and the fundamental nature of Project Greenlight which did not make the show," he said. "I am sorry that they offended some people, but, at the very least, I am happy that they started a conversation about diversity in Hollywood."

At best, the statement was defensive, basically a new phrasing of the old reality trope: Blame it on the editing. At worst, it was ignorant of what his part in this really was. His comments were what started "a conversation about diversity," he's saying, not Brown's. He's still talking over her and erasing her role.

A mystery: Just as the wildfire from that incident was dying down, Damon gave an interview to the Guardian about his new film The Martian. At one point, when talking about playing a gay character in his 2013 film Behind the Candelabra, Damon espoused what would quickly become a very unpopular opinion about actors coming out.

"I think it must be really hard for actors to be out publicly," he said. "But in terms of actors, I think you're a better actor the less people know about you, period. And sexuality is a huge part of that. Whether you're straight or gay, people shouldn't know anything about your sexuality because that's one of the mysteries that you should be able to play."

The comments were quickly extrapolated into a paraphrase: Damon thinks LGBTQ actors should stay closeted. While Damon's comments were incredibly stupid, he didn't say what he was accused of saying.

Then he went on Ellen and mucked it all up again.

"I was just trying to say actors are more effective when they're a mystery. Right?" he said to Ellen DeGeneres. "And somebody picked it up and said I said gay actors should get back in the closet. Which is like, I mean, it's stupid, but it is painful when things get said that you don't believe."

Instead of apologizing for offending or speaking out of turn, Damon blamed the Internet. "In the blogosphere there's no real penalty for just taking the ball and running with it," he said.

Just listen: Critics' rage is explicable, if outsized. Damon is a straight, cis, white man using a considerable platform to espouse half-baked, lazy thoughts on diversity and being queer in Hollywood. It's always sad when a beloved figure, especially a liberal one, gets it wrong, be it a celebrity like Damon, or a politician like Bernie Sanders.

Damon could turn this news cycle into a win — and actually learn something — if he would just lend an ear to critics. Instead, he's coasting above the fray. He won't hear any comments about why he was wrong because he doesn't have to. The news cycle will move on in a couple of days, and this will almost entirely be forgotten.

People of color who work in Hollywood can't move on, though. The industry remains as unfriendly to them. LGBTQ performers debating coming out just got a discouraging sign from a supposedly gay-friendly actor: It's better for your career if you remain mysterious, whatever that means.

Damon didn't mean to send such messages, but he did. What's so upsetting is that Damon can't see why he should take responsibility. He's not a bigot. He's not hateful. He's just a privileged guy who stubbornly won't learn.