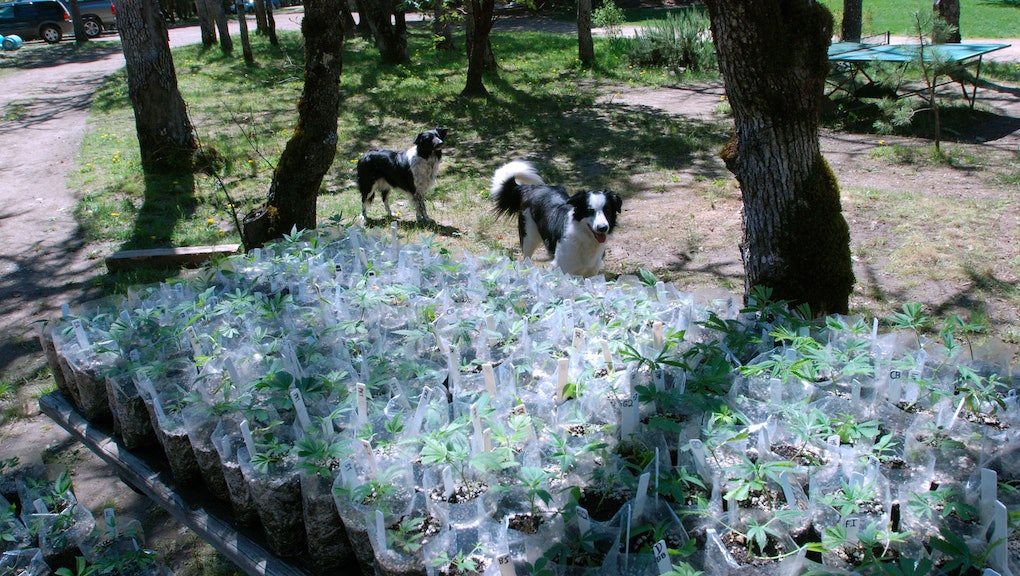 Marijuana has been legal in the state of Oregon since July 1, when a ballot initiative approved in 2014 cleared the way for residents and tourists to carry and use the drug, keep up to eight ounces in their homes and grow as many as four plants, provided they are hidden from public view.

Smoking on the street or in common spaces is still illegal, and the growth business is tightly regulated. Like with beer and alcohol, industrial-scale production remains the province of licensed businesses.

But even as the marijuana business booms, there remains a significant financial incentive for local police departments willing to dedicate their time and resources to searching out and destroying rogue crops. The Drug Enforcement Administration will send more than $750,000 to Oregon law enforcement this year, according to a report by Portland's KGW, to bolster those efforts. The federal government will spend in excess of $18 million this year to pay for similar eradication programs nationwide, KGW reports.

Following the money: In 2014, local law enforcement officers in Oregon pulled up more than 16,000 cultivated plants, at a cost to the federal government of more than $960,000, the Washington Post reported. That works out to nearly $60 per plant, or 15 times the national average of $4.19.

A spokesman for the DEA defended the tactic, telling KGW that the program "has proven effective in dismantling and disrupting drug trafficking organizations, has protected public and tribal lands from illegal marijuana grows and in 2014 was responsible for the removal of almost 5,000 weapons [in all 50 states] from cannabis cultivators."

But as a number of increasingly outspoken critics are quick to note, cartel activity in Oregon has diminished since voters effectively closed the statewide marijuana black market in 2014. According to the KGW report, officers have found progressively fewer illegal grows over the past three years, with the final count for 2014 — 16,067 — down from 27,641 in 2012 and 26,597 in 2013.

Still, most police departments are understandably happy to carry on doing the job. KGW found that officers doing drug patrols in 2014, often through aerial surveillance from expensive rented helicopters, collected an estimated $275,000 in overtime pay.

"Those of us in reform have always seen eradication programs as largely a make-work, overtime program for cops to go pull weeds and spend taxpayer money on helicopters," Russ Belville, executive director of the Portland chapter of the National Organization for the Reform of Marijuana Laws, told KGW.

Who profits: Despite opposition from groups like NORML, the raids are generally welcome by groups otherwise supportive of ending marijuana prohibition.

The Marijuana Policy Project, which lobbies for reform in Washington, D.C., is ultimately tied to the interests of this rapidly expanding industry.

In an email to Mic, MPP communications director Mason Tvert allowed that the "funds could probably be used for more pressing matters than marijuana eradication," but stopped short of denouncing the program.

"If they are going to be used on marijuana-related efforts, they must only be used to eliminate cartel activity and illegal operations," Tvert said. "That appears to be their stated intent, which means they're basically assisting a state in replacing an illegal underground market with a regulated legal market."

But an increasing number of elected officials and even some reform-minded law enforcement agents have begun to question the efficacy of dedicating such proportionally large sums of taxpayers money to pulling these plants out of the ground.

"When there were huge cartel problems, we needed that money," Jackson County Sheriff Corey Falls, who dissolved his task force earlier this year, told KGW. "But now we don't. I wanted to focus on person crimes."