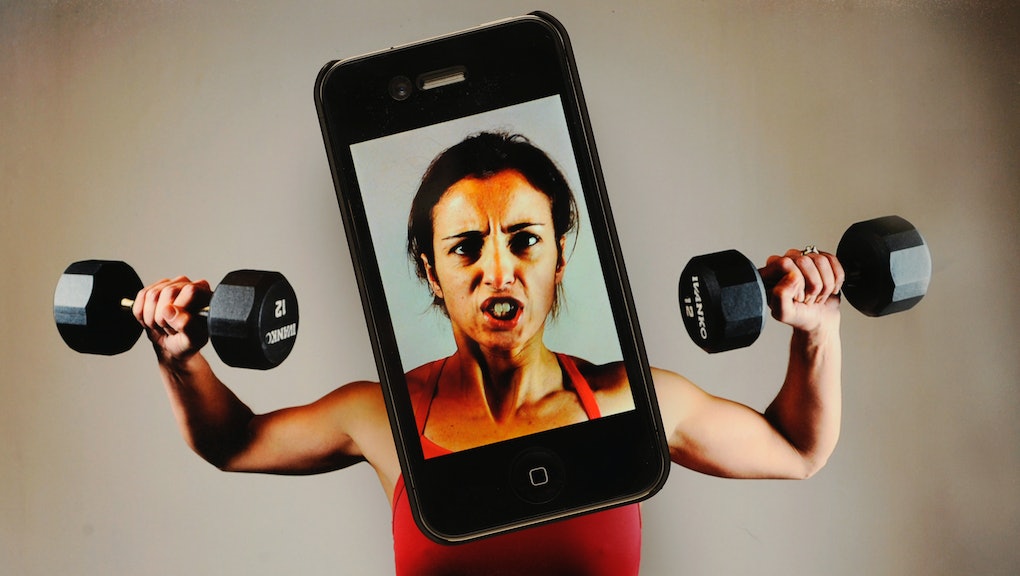 Fitness apps have friends in high places. Tim Cook uses them to curb his sedentary habits, Khloé Kardashian has her own and James Duigan, personal trainer to the stars, advises using them for "remaining fit, healthy and happy while on the go." Apps like FitBit and the wearable tech products that accompany them are becoming ubiquitous, and the Apple Watch has prompted millions of people to get out of their seats and move once an hour.

Health tech is trendy. But is it really making us more active?

A recent study published in the Journal of Medical Internet Research gives this popularity a layer of scientific credibility. According to the research, participants who used fitness apps were more active compared to nonusers and past users.

Perhaps most importantly, however, the study's authors also found that current users had a lower body mass index than past users and nonusers, "and that this association was mediated by exercise levels and self-efficacy" — the latter, in this case, defined as the belief that one can effectively exercise.

"Our main finding was that people who have a lot of barriers appear to obtain higher levels of self-efficacy when they use exercise apps," Litman said.

Litman and his colleagues examined the exercise habits of 726 participants, whom they split into three groups: current app users, former app users and nonusers.

Almost 75% of current app users said they were more active; less than half of nonusers and former users said the same. In addition, current users had BMIs of 25.16 — lower than the BMIs of 26.8 for past users and 26.9 for nonusers.

The team looked at various apps over the course of their research, and tracked participants' usage consistency. "We looked at whether apps target physical activity only or physical activity plus diet, whether apps incorporate social aspects and whether the app focuses on aerobic or anaerobic exercise," Litman said. "The results showed that apps that focus on aerobic exercise such as cardiovascular conditioning tend to be used for longer time periods compared to apps that focus on weight training."

The results, besides giving current users hope and nonusers a nudge in the right direction, also provide an opportunity to figure out how fitness apps can be designed and used more productively in the long run. Litman, whose area of study focuses on the psychological, believes that the mind is key in helping people stick to their apps, and thus their exercise routines.

"Because these barriers are psychological in nature we need to utilize psychological principles in order understand how to help people overcome them," he said.

It makes sense. "Apps help people who may not have been motivated otherwise to improve or increase their motivation to exercise," Heather Milton, a senior exercise physiologist at the Sports Performance Center of New York University's Langone Medical Center, told Mic.

They provide what she described as extrinsic motivation: an extra boost in the form of tracking, data collection and cold, hard numbers. While intrinsic motivation — the inner enjoyment of belief in exercise for exercise's sake — is king, sometimes, we need an extra push to get us to actually do it, and that's where an app comes in.

They're not magic cure-alls — both Litman and Milton said they work best for people who already have the desire to exercise — but they can help kick things into gear.

Milton said apps work for people who are "trying to get more active, but they're coming up against a lot of barriers," like budgeting time or "not having clear direction." They're for someone who needs a boost.

Any method that adds a personal component to something that's otherwise very impersonal, like exercise, is a surefire way to keep people interested. There are a wide range of fitness apps out there — Milton told Mic she likes Nike's running app — and they all offer different things.

"If you're someone who really responds to competition," Milton said, apps that have social capabilities might work best. "You can post what you did that day, and then your buddies then can post what they did, and it then becomes a competition." This might sound like a nightmare for some, but the beauty of the app world is that there are a plethora out there to choose from.

"Whatever keeps you active, keep doing it," Milton said.

But apps can also become a crutch. Milton noted that if you're a person for whom the intrinsic motivation comes naturally, it may be best to stay away from a fitness app.

"If somebody already is interested and driven, I wouldn't necessarily suggest that they use an app, because they already have a good thing going," she said. The balance between extrinsic motivation and inner desire can get thrown off, which may spell bad news down the road.

But for those of us who need an extra push, fitness apps might just have us feeling like Rocky someday soon.