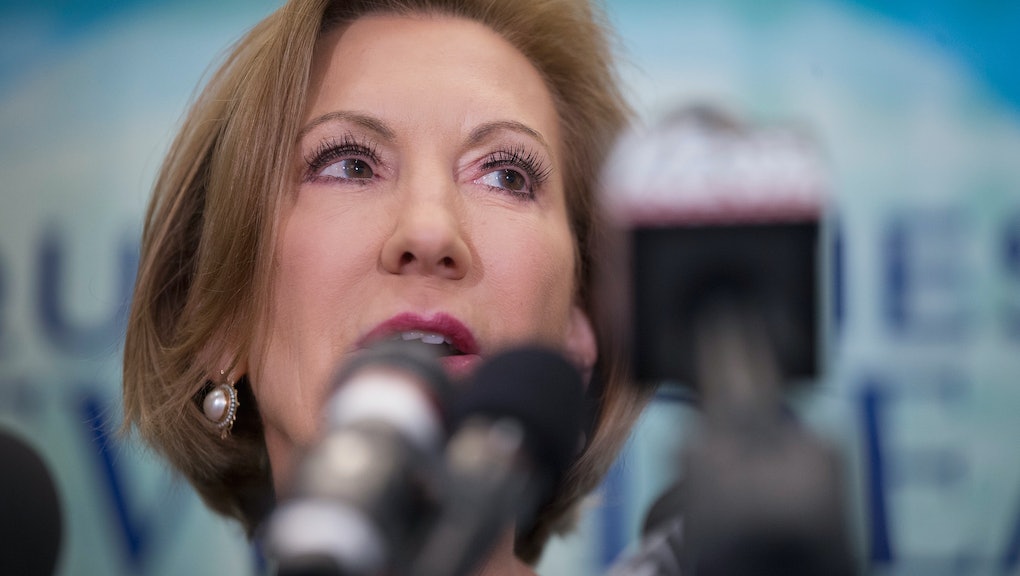 On Tuesday, anti-abortion activist and Center for Bio-Ethical Reform founder Gregg Cunningham released a 13-minute video he says is an extended version of the video of an abortion Republican presidential candidate Carly Fiorina referred to in the second GOP primary debate.

The exceptionally graphic footage is available on YouTube and was previously released in part in a video released by another anti-abortion group, the Center for Medical Progress.

Fiorina referred to the clip that used parts of the full 13-minute video during the Republican primary debate on Sept. 16, telling the audience it corroborated additional footage the CMP says implicates Planned Parenthood in illegal fetal organ harvesting.

"As regards Planned Parenthood, anyone who has watched this videotape, I dare Hillary Clinton, Barack Obama to watch these tapes," Fiorina said during the debate. "Watch a fully formed fetus on the table, its heart beating, its legs kicking while someone says, 'We have to keep it alive to harvest its brain.'"

Fiorina deputy campaign manager Sarah Flores has previously directed reporters to the CMP video, which contains sections of Cunningham's footage spliced with narration from a former laboratory technician relaying the brain-harvesting story, as evidence that Fiorina's remarks were well-sourced.

But there's a big problem here: Two doctors consulted by Mic said the extended footage likely does not depict an abortion procedure at all, let alone provide any evidence the fetus was being preserved for its organs at a Planned Parenthood facility. Instead, they say, it is likely footage of a premature delivery.

Dr. Jen Gunter, a San Francisco Bay Area OB-GYN who wrote a blog post pointing out numerous flaws with the footage, told Mic in a phone interview, "No one can be absolutely sure of anything unless they are there, but [...] if you were just to show me this video and say what is this, I would say this is a premature delivery."

"There are a whole bunch of things in the video that we just don't do except for a premature delivery," Gunter said. "Unless the center can produce the name of the physician who did it and say this is an abortion, I think it's not."

Here's the section of Gunter's blog post arguing the footage does not depict an abortion:

Here are all the issues with the video from start to finish:

Another doctor consulted by Mic, who posts on Twitter under the handle @DrJaneChi, was more even emphatic. (She provided credentials identifying her as a doctor who provides abortion care at an independent clinic in the Midwest, but preferred to stay anonymous due to previous harassment by anti-abortion activists.)

Gunter agreed the video could depict an abortion performed in another country. But since the video lacks audio, it is impossible to ascertain which language any rolling commentary from doctors or the patient is in.

Cunningham told Time the lack of medical attention given to the fetus in the video demonstrates it was an abortion. But Doe told Mic that doctors are not legally or ethically obligated to provide futile care, and "the resuscitation of an 18-week fetus would certainly qualify as that."

The footage has become a major election issue for the Fiorina campaign: The former Hewlett-Packard CEO's remarks on the footage were among her most-highlighted comments of the second presidential primary debate. Her performance on the stage sent her skyrocketing from 11th place in a CNN poll conducted before the debate to a tie for third place in a recent NBC News/Wall Street Journal poll.

More generally, Fiorina amplified the Republican push in Congress to defund Planned Parenthood, which House of Representatives leadership including Speaker John Boehner is trying to defuse before it leads to another government shutdown. On Tuesday, a separate Missouri state investigation found no evidence Planned Parenthood acted improperly.

In a statement to Time, Cunningham commended the impact of the video, saying the CMP managed to "shift the terms of the debate away from choice to a visualization of what is being chosen." But if the footage does not actually depict an abortion, that choice of visual is misleading.