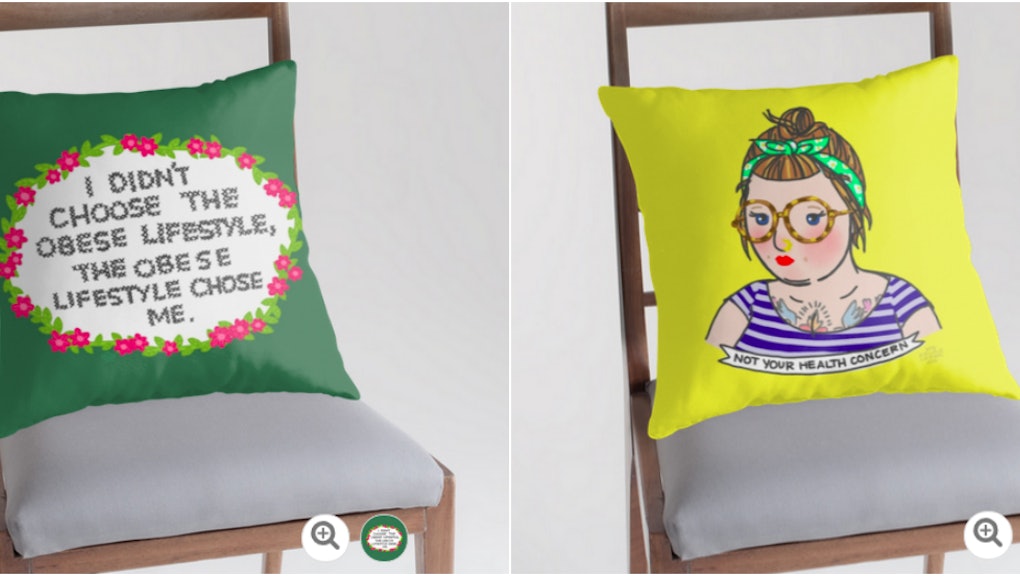 Rachele Cateyes wants you to know exactly what she's thinking.

The Portland, Oregon-based artist's work, which is being sold on iPhone cases, posters and even throw pillows, may incorporate cutesy cacti, flowers and a really chubby chihuahua, but don't let that fool you. The art has a message everyone could use to hear.

Cateyes, who wrote an e-book called How to Be a Fat Bitch, uses her body-positive slogans to take aim at the public's stigmas against fat bodies. Her aggravation around the subject peaked last year, when an image of her was stolen and used for a diet company's "before" photo without her permission.

"I'm really tired of having to justify who I am and sit around while I am Photoshopped, turned into gross memes, and [made] the target of hate," Cateyes told BuzzFeed.

Now her artwork, which she started in August, shines a light on the normalized hatred and harassment of fat people, and how damaging words can be, especially in the insidious form of "concern trolling."

"By just existing as fat people, we are told that we're glorifying or promoting obesity," Cateyes said. "We are harassed under the guise of 'being concerned for our health.'"

In order to turn those sentiments on their head, she surrounds the negativity with positive, cute items and objects. She wants to turn these hurtful words into a positive and reclaim them as her own.

"My way of dealing with the harassment is to turn it into something positive," she says. "A cute and colorful drawing, or something that can be slapped on a tote bag and worn proudly!"

She's most passionate about empowering other women who may be facing comments like these daily. While many of her products are sassy rebuttals to the negative statements she's experienced, she wants to make sure her designs touch upon and enforce how a woman's worth is in no way linked to her size.

That's the sort of vibe we want brightening up our apartments.