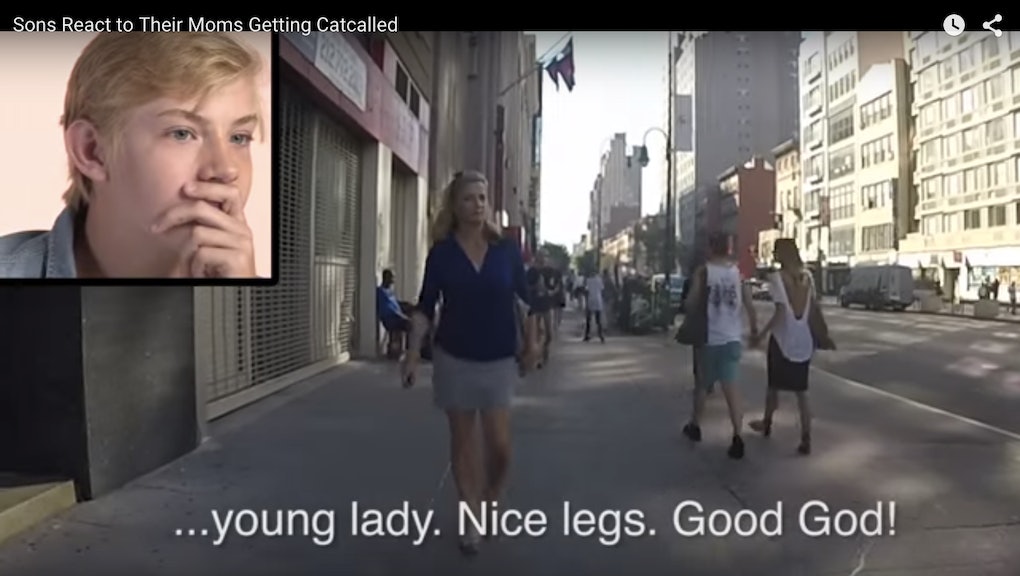 We've pointed out many, many, many times that catcalling is sexist, unnecessary and just plain gross. But apparently for some men, the only way to fully comprehend how unnerving and/or threatening and/or straight-up violent street harassment can be is to watch women they care about be affected by it.

In a follow-up to a video of dads watching their daughters get catcalled, digital video storytelling network the Scene published this week a clip of young men watching footage of their mothers being harassed, ostensibly to illustrate to the boys why it's never OK to shout inanities at strange women just because they're wearing high heels (or clothes of any variety).

"It's ridiculous," says Tyson, one of the young men in the video. "When someone catcalls my mom, I just feel angry and weird — just, so much anger."

There's one problem: While it's all fine and good (and necessary) to teach boys and men not to harass women in any context, illustrating the ills of catcalling by appealing to men's most selfish impulses reinforces the empathy gender gap. Men shouldn't only be able to come to understand the harsh reality of being female by seeing how it affects those close to them personally. They also need to understand that women are people too, not just mothers, sisters, daughters or wives.

"Boys shouldn't be taught that only women to whom they are genetically bound are worthy of being treated as human beings because, in part, that implies those who are not family are subhuman and therefore deserving of their own victimization," Stassa Edwards wrote for Ms. in 2013.

Men need to see that women no matter how young or old, no matter if they have children or not, are often targeted for harassment without cause. But those women shouldn't have to be family for them to understand that it's a problem.