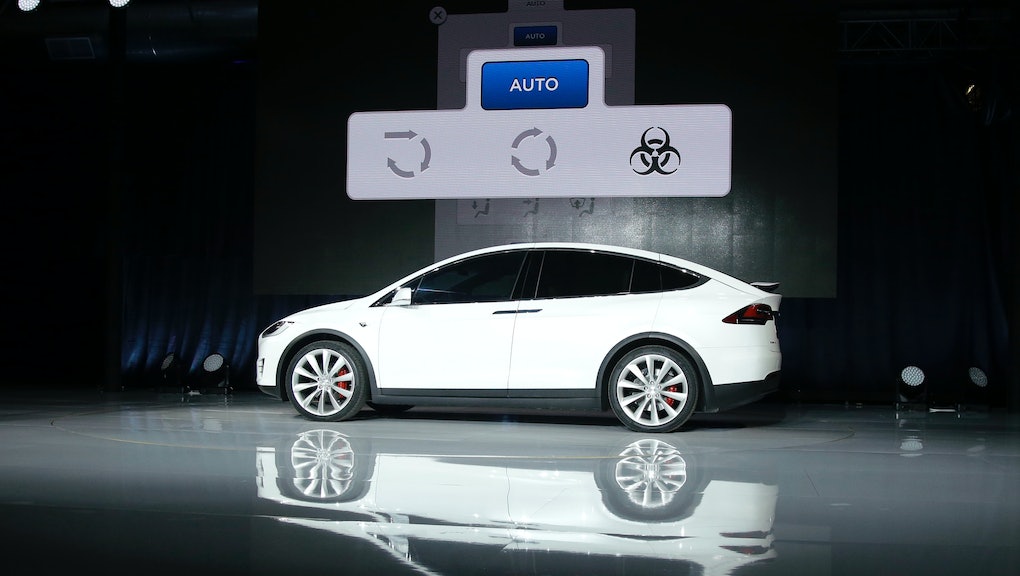 During a Tuesday evening event at the Tesla factory in Fremont, California, the electric car company unwrapped its long-awaited, shiny Model X. Tesla broke the mold with X, a luxury sports utility vehicle and the company's third and most futuristic model to date.

The automaker claims that the Tesla Model X is the fastest and most energy-efficient vehicle of its kind. It comes with a 90 kilowatt-hour battery, meaning the X can travel 250 miles between charges and accelerate at a breakneck speed of zero to 60 miles in 3.2 seconds. The car's even got rear passenger "falcon" doors that open DeLorean style. But that's not all.

The car has an air filtration system so advanced that it could protect passengers from biological weapons, the company says. As usual, the system circulates internal air with outside air when set to normal, while recirculate mode recycles and filters internal air. Switching the filtration system to "bioweapon defense" mode creates positive pressure inside the car to produce a highly sterile internal flow of oxygen.

"This is a real button," Musk told his audience, that elevates air quality to "the levels of a hospital room," according to the Verge. The"medical grade" high-efficiency particulate air filter eliminates pollen, viruses and pollution from air entering the Model X cabin, according to Tesla. "We're trying to be a leader in apocalyptic defense scenarios," he added.

"We're trying to be a leader in apocalyptic defense scenarios."

The tools to build biological weapons are more available than ever before, according to U.S. News and World Report. As technology continues to advance weaponry, a biodefense feature could certainly sell cars.

After news of Tesla's new feature surfaced, fans took to Twitter to react to the function. Many called into question the necessity of such an extreme addition.

It's possible that Musk agrees with skeptic Tesla fans. His one regret about the Model X is going overboard with new features, according to the Wall Street Journal. "If we had known the true engineering costs and complexity, we would have done fewer things," he told the paper.

Check out footage from the big reveal below, and for people with an extra $132,000 lying around: You're covered in the next biochemical attack.