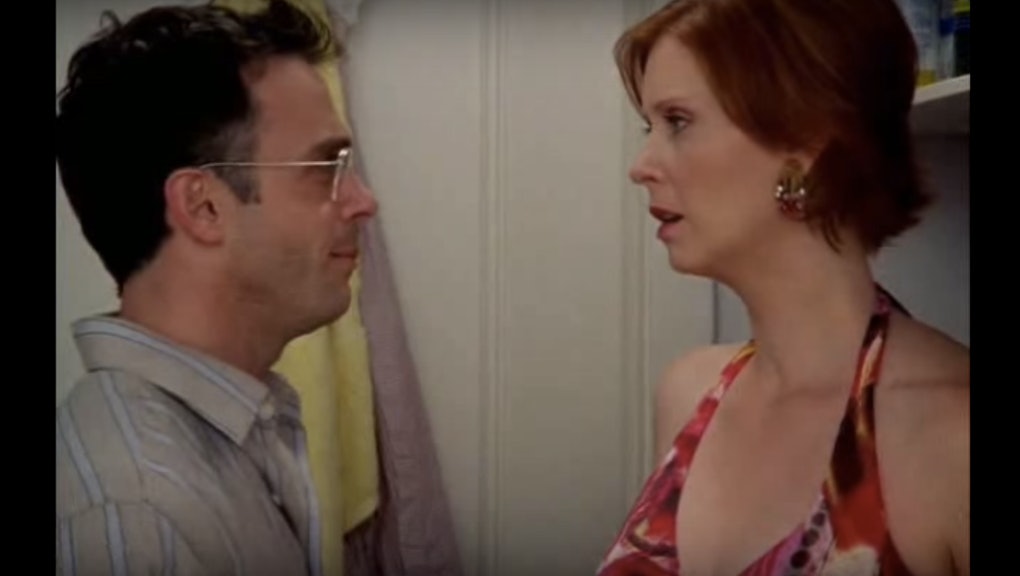 Last summer, author Jon Birger published Date-onomics: How Dating Became a Lopsided Numbers Game, which essentially argues that today's dating market is suffering from a so-called "man shortage." Birger argues that this "shortage" can be attributed to one primary factor: a skewed ratio of educated women to educated men.While there are 5.5 million college-educated women ages 22 to 29 in the United States, there are only 4.1 million college-educated men.

The book raises some interesting questions about what we look for in a mate, as well as some alternative solutions for the marriage-minded among us. (Apparently, if you're a lady who wants to put a ring on it, Silicon Valley is a single-man mecca.) But Birger also suggests that this "man shortage" might result in a surprising trend: women dating outside their class and education levels.

"These lopsided numbers might not matter if young, college-educated women become more willing to date — and, eventually, marry — across socioeconomic lines," Birger explained in the Washington Post.

At face value, the suggestion that women date outside their class seems hopelessly old-fashioned, not to mention politically incorrect. After all, we're living in the 21st century, not in the highly stratified social world of Downton Abbey. However, the uncomfortable truth is we do gravitate to partners who have the most in common with us, which means we tend to date within our social classes and education levels. According to Pew Research Center data, as of 2007, among college-educated adults, 71% of married men have a college-educated wife — a huge increase in the last 40 years.

So what happens when modern singles venture outside their socioeconomic pools and engage in what Birger calls "mixed-collar dating"? To find out, Mic spoke to men and women in modern-day mixed-collar relationships.

A relatively rare attraction: Despite what Disney movies might tell you, it's rare for people to hook up across classes. That's because research shows that most of us just feel more comfortable dating people at similar educational and economic levels. In fact, researchers at the University of Pennsylvania have found that the tendency to marry within our education level has drastically increased since 1960.

To a degree, this trend makes logical sense. Since most couples meet through mutual friends or work, people are simply more likely to cross paths and hook up if they have shared interests and backgrounds, which often means they have shared economic backgrounds as well.

"Strangers who have never met yet who share a class background often have more in common with each other than spouses with whom they share their life if they came from different classes," sociologist Jessi Streib, author of The Power of the Past: Understanding Cross-Class Marriages, told Vox.

But thanks in large part to the Internet leveling the playing field, people have more opportunity to meet and hook up with those from different walks of life. Take, for instance, Kim* and Zach, who met through Craigslist casual encounters. Kim self-identifies as working class: her father worked for the US Postal Service, while her mother was a nurse. Her boyfriend, Zach, on the other hand, is descended from a prestigious Midwestern family and grew up very affluent, living in a mansion-like home, playing on tennis courts and attending private schools. But while Kim is now pursuing her master's degree, Zach dropped out of undergrad years ago.

As a result of their disparate upbringings, the two have totally different outlooks on life — which is partially why they're so attracted to each other. "He doesn't have to impress anyone (except probably me) ... He excels at chilling," Kim said. "He loves animals. He loves working with his hands. He chops wood! Do you have any idea how hot it is to watch your boyfriend chop wood?"

"It's not like I went out in search of some 'working class hero' type because all of the guys from my school were taken," Emily*, 27, told Mic. Emily attended a west coast private school, while her carpenter boyfriend Alex* has his GED. "I met my partner at a party, immediately felt attracted, and we went out a few times. We've been together since."

Emily is not blind to the class differences between her and Alex. When she first met his parents, for instance, she was a little surprised when she had to sleep on the couch for the stay and his family ordered pizza for dinner. "I was used to my family's house, where we have multiple guests beds and plan huge menus," Emily said. "But I'm fine with being frugal."

The two work around their differences by opting for Netflix instead of going out to movies or staying in to cook breakfast instead of going on $100 brunch dates. "I still get quality time with him, even if it looks different from the type of nights my friends spend with their S.O.'s," she told Mic. Their relationship works simply because "we enjoy the simple pleasures and, fuck, he makes me laugh."

Bridging that wide gap: We can pretend we live in a classless society all we want, but there are nonetheless a few inevitable speed bumps that come with mixed-collar relationships. For instance, money is cited by most couples as one of the biggest sources of fights and stress. Navigating a relationship where your outlooks about money differ can exacerbate the tension of dating someone of a different economic status.

In her research, Streib found that people from different classes tend to approach their relationships differently. White-collar professionals like to manage and organize things, while working-class people like to "go with the flow more." It's that radically different approach to everyday problems — lost wallets, the electric bill, who picks up the bar tab — that can cause rifts.

Kim, for example, has noticed that Zach tends to dream bigger than she dares. "He's dying to buy a house. I view home ownership as totally out of reach for me, and I hesitate to get financially involved with him. He dreams about luxury items like boats and RVs. I just dream about paying off my student loans."

Nonetheless, couples in mixed-collar relationships say there's a fairly easy way to transcend economic differences: acknowledging they exist and just getting over them.

Letting go of a checklist: If Streib has any practical advice for couples looking to maintain mixed-collar relationships, it's that they not try to change one another. People who enter relationships with a "come as you are" attitude often have the most long-lasting ones.

"Some of the people that I interviewed married people with the very idea that they were going to change them. That's not going to work, especially if it's class difference — it's just going to be a frustrating experience for both people" Streib told New York magazine. "So marrying someone who you appreciate as they are is a really big part of it."

Couples in mixed-collar relationships echoed this sentiment, saying that in order for such relationships to thrive, you need to detach from both your personal and social expectations of who your partner "should" be. Among other things, that means keeping your ego in check if you're dating someone who has a higher level of education (or makes more money) than you do.

"I never finished school, but she doesn't throw that in my face," Tom*, 33, a bartender who's been dating 30-year-old lawyer Nadia* for four years, told Mic. "If I had an ego about her making more than I do, I would have missed out [on dating her]."

It also means relaxing some of your personal expectations for who and what your ideal partner "should" be. That doesn't mean settling so much as it means figuring out what really matters to you in a relationship. In most cases, the answer usually isn't whether your partner makes a six-figure salary or has a master's degree.

"After a while, you start to let go of your checklist," Nadia told Mic. "You stop saying, 'I need someone with this salary, in this position, who can do such and such.' And, instead, you just ask yourself: Is this a sweet, kind person who will really make me happy? That's what I found with my boyfriend."