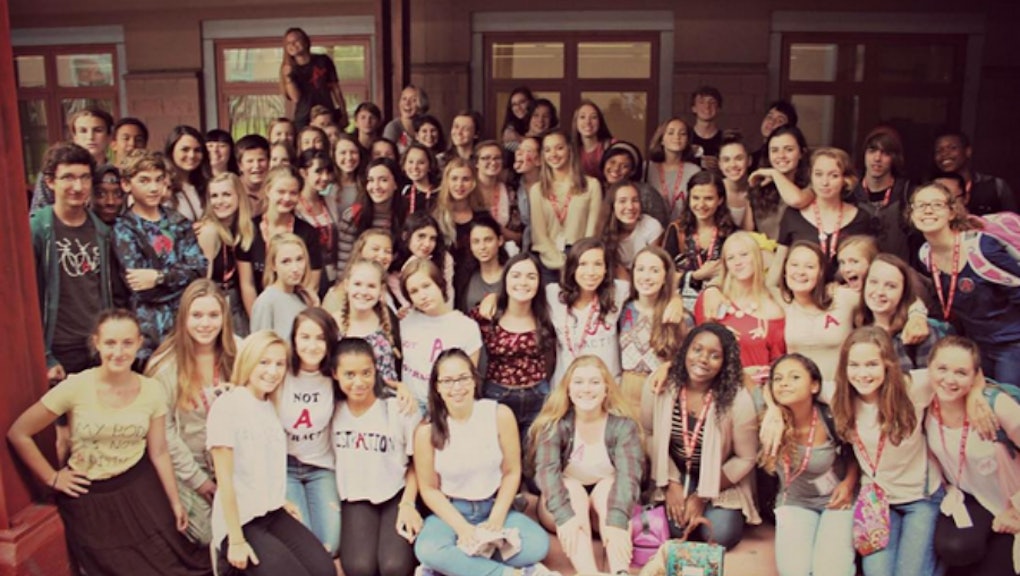 Students at Charleston County School of the Arts in North Charleston, South Carolina, have had enough.

Too many girls have been sent home because of a strict dress code policy that they claim targets girls unfairly. Now they're doing something about it. The best part: They're taking action by turning their high school curriculum — The Scarlet Letter — into reality.

Reese Fischer, a junior at CCSOA, issued a call to action on her Instagram last week, stating in an extended caption:

Hi! As many of you heard, there's a new dress code policy being enforced as of tomorrow that will require students to leave class and sit in the office until their dress code violation is 'dealt with'. Also, for a teacher to send you to the office they do not have to dictate whether or not you're in dress code, [they just have to] simply question it. Many students find it incredibly offensive that their outfits are being held at a higher importance than their education. ...

Calling out unfair, disrespectful treatment: For the protest, which brings to mind the Emma Stone film Easy A, about 100 girls and boys at the school wore scarlet letter A's last Thursday in an act of support for the girls affected. What they're protesting isn't the CCSOA dress code itself, which is pretty standard (no pants worn below the waist, no exposed undergarments), rather the way in which administrators are enforcing the dress code.

CCSOA junior Peyton Corder told the Post and Courier a guidance counselor once approached her and "told her that heavier girls needed to wear longer skirts." A sophomore, Caroline Hamrick, opened up about her experience with a teacher asking her to lift her arms to see if her top was then midriff-bearing.

"And of course you could see my midriff once I raised my arms, but I was like, 'Still, I'm not like this all the time,'" she told the Post and Courier.

"In the summer, you see guys walking around in muscle tank tops with half their sides hanging out and their pants hanging down, and they don't get called out for that," Fischer told the Post and Courier.

#NotADistraction: The protest has hit social media with the hashtag #NotADistractionSOA (SOA standing for the school name), with girls posting their A's and even DIY embroidered T-shirts on Instagram.

The hashtag has also made its way to Twitter, where women beyond North Charleston are renouncing dress codes, which often make a girl's right to education a lesser priority.

Unfortunately, it's not a unique problem. Recently, more outspoken girls have been publicly pushing back. With the help of the Internet, girls like 16-year-old Kentucky student Stephanie Dunn have drawn attention to how strict and often confusing the rules can be.

They're also calling out how the rules ultimately end up sexualizing girls. In May, an anonymous viral photo posted to Reddit showed a slip of paper taped to a school's hallway stated, "Girls wear shorts in order to stay cool when hot, not for you. We are 17 years old; stop sexualizing our bodies. If my shorts make you uncomfortable, you are the problem."

CCSOA has reacted rather positively, with the assistant principal, Robert Perrineau, calling the movement "learning in action," while acknowledging that he does see how girls have felt singled out in the policy.

"This is just a reminder of what was is already in place, that we need to be consistent and be equitable and be fair to everyone," Perrineau told the Post and Courier. "We do want to make sure that we're all giving that reminder and giving attention to any individual student situation in the same way. We want the point to be made, but we want to be respectful."

While most students wore the scarlet letter just a handful of times last week, some refuse to let up until they see some real results.

"I'm pretty sure the administration thinks it's just going to fizzle out in a week, but we're trying to keep that from happening," Hamrick said.

The same goes for Corder, who wants what a lot of girls want: to go to school and just learn.

"We're just tired of being objectified," Peyton said. "We worked hard to be here. ... We want to wear what we want to wear, we want to express ourselves and we just want to learn."