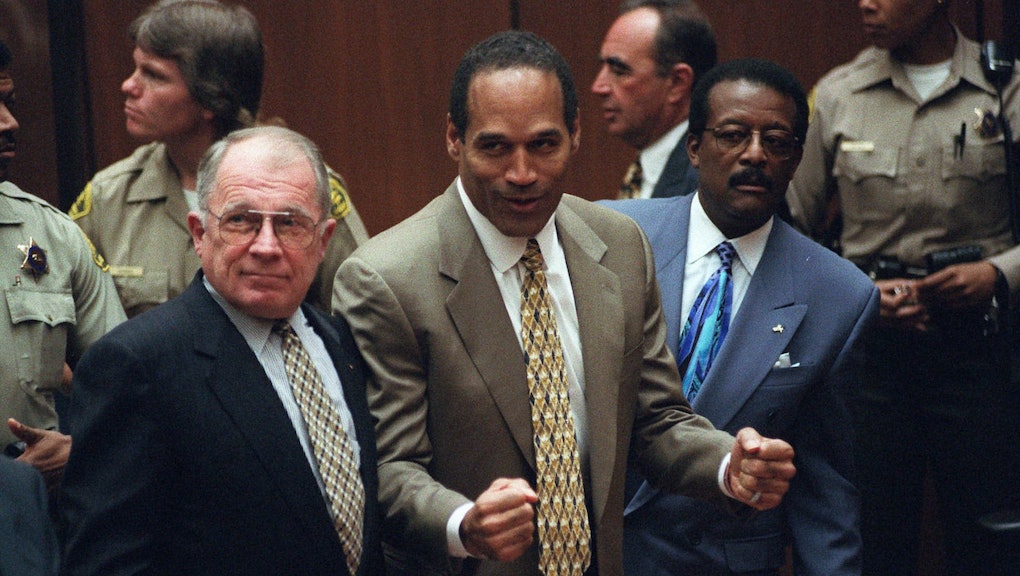 Two decades after O.J. Simpson was acquitted on charges of murder, pop culture is still feeling the impact of his trial. It can be seen in more than just a call-out joke in Unbreakable Kimmy Schmidt or an adaptation for a show like the upcoming American Crime Story: The People vs. O.J. Simpson. It's not a minor event mentioned on anniversaries or joked about in a "remember that?" kind of way. It was and is momentous.

The changes the trial sparked are so ingrained in cultural trends, however, that many might be taken for granted today. Of course car chases were always televised. Of course the legal system was always a topic of fascination in primetime shows. Yet rip the trial from history, and much of what's on TV or who's in the tabloids would change.

Twenty years ago, the trial literally changed the course of cultural history. As Simpson himself sits in jail on a guilty verdict from an unrelated crime, society still feels the effects of his case. This is how.

After the Simpson trial ended, American viewers who spent a year watching a trial play out on TV found a wealth of options to cure their legal cravings. One could point to an influx of primetime dramas — Law and Order spinoffs, procedural hybrids like The Good Wife and Damages — as evidence of that fascination. Yet two other program types are far more emblematic: syndicated court shows and TruTV, the network formerly known as CourtTV.

In 1996, just a year after the verdict came down, a brash new character came to daytime TV: Judge Judy Sheindlin. On her show Judge Judy, she hands down judgments in civil disputes that have no particular legal bearing, but make for great programming. Along with the previously existing People's Court and dozens of imitators, all with similar names (See: America's Court), court shows quickly staked their claim on weekday television.

Meanwhile, CourtTV made its name on its coverage of both the Simpson trial and Lyle and Erik Menendez's murder trial. For about a decade, the channel would live-stream court coverage of whatever hot case was in the headlines — as did, of course, the rest of cable news.

As TruTV shifts that programming, though, cable news remains as devoted to high-profile trials. Personalities like HLN's Nancy Grace lead the charge — her coverage of the Casey Anthony trial was particularly infamous for its doggedness and the host's tenacity.

The Simpson trial's effect on the cable news cycle goes beyond just trials, however. All told, the case spent over a year in public consciousness. It was a news event with massive public interest in a time without Twitter. Cable news became the source for up-to-the-minute updates. CNN's insistent coverage of the disappearance of a plane earns mockery in the 21st century; in 1995, however, it was how the biggest story of the year was told.

What does Gillian Flynn's hit book (and David Fincher's film adaptation) have in common with the Simpson trial? Certainly the vicious cable host Ellen Abbott is based on Grace, but Flynn's satire of media attention to public legal proceedings cuts deep. Victims and villains are chosen by public perception.

Nick Dunne may have been innocent, but thanks to Abbott and her cohorts, he was deemed guilty long before he was even arrested. Simpson's trial didn't create the court of public opinion, but it changed it into the form we know now: a media world that decides a case long before the facts are clear.

June 17, 1994, was "the day Los Angeles stopped," as described by one lawyer. More accurately, it might be called the day the country stopped — and watched. Simpson evaded police in a white Ford Bronco as Angelenos and people across the country waited on edge to see what would happen. It was the scene-setter for a trial that wouldn't end for another year. Americans were the voyeurs from moment one.

Since then, car chases have become a routine part of crime news coverage, so much so that the BBC has termed the United States' affection for them as "love." From the local to the national — sometimes with tragic results — television remains transfixed.

The other items on this list are about incidental consequence: influence, domino effect, etc. In another history, something else could have caused Americans to love car crashes, or inspired Flynn to write Gone Girl. The rise of the Kardashian clan, however, is entirely thanks to the Simpson trial, and one of the defendant's lawyers, Robert Kardashian.

Now deceased, Kardashian had four children with a woman named Kris: Kim, Kourtney, Khloé and Rob. His ex-wife went on to remarry someone who we now know as Caitlyn Jenner. Their children became not just famous, but huge brands. They have books, websites, mobile games and apps. Together, the family came together to create one of the most successful reality TV series empire ever, with a bunch of spinoffs for good measure. Jenner would become a leading icon of the trans visibility movement.

They are a dynasty, and one as successful as it is because of that initial famous connection. The Kardashian family is the most tangible effect of the Simpson trial on pop culture. Since he passed in 2003, before Keeping Up with the Kardashians was a figment of anyone's imagination, Robert Kardashian never knew how his mere presence on a legal team would change popular culture forever.