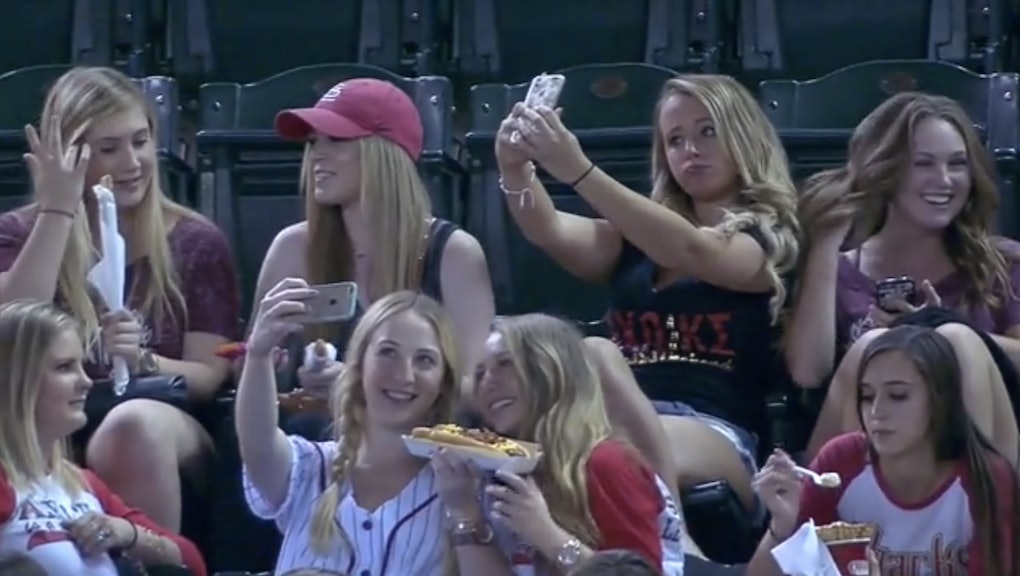 Today in reasons why we should #banmen, a clip from a major league baseball game is going viral due to the off-color commentary by the game's announcers, who are heard mocking selfie-taking college girls.

The incident happened when the Arizona Diamondbacks played the Colorado Rockies earlier this week. In the clip in question, the announcers told viewers to "get on the Twitter" to post selfies for a fan photo contest.

And then, not even a minute later, the announcers started making fun of the girls for... uh... taking selfies. (Fox Sports has reported that the announcers were Steve Berthiaume and Bob Brenly, who do the play-by-plays for the Diamondbacks.) Which is exactly what they told crowd members to do.

"Do you have to make faces when you take selfies?" one of the announcers said. "Every girl in the picture is locked into her phone. Every single one is dialed in. Welcome to parenting in 2015. They're all just completely transfixed by the technology," the other announcer added. "You know the beauty of baseball is you can sit next to your neighbor and have a conversation. Or you can just completely ignore them."

The men then started poking fun at the girls' choices to take selfies with their churros and hot dogs. "Can we do an intervention?" one asked.

So, a few things:

First of all, fans were literally instructed to take selfies moments before this scene unfolded. Secondly, even if they weren't, WTF? Let he (or she) who has never posted a lighthearted hot dog selfie on Insta throw the first stone.

But the conversation is particularly offensive in light of the stereotypes surrounding female sports fans, such as the idea that they're somehow less serious than male fans or that they only pretend to like sports to attract guys. These stereotypes are particularly offensive when you consider that women make up a third of the audience for major televised sports events, such as the NBA finals and the World Series.

The fact that the men are mocking the women for taking selfies is also rage-inducing. The conversation surrounding selfies is inherently gendered: While critics of selfies have argued that taking selfies is superficial and narcissistic, these are also adjectives often used to describe young girls, as Everyday Feminism has pointed out. One can reasonably assume that had the announcers focused on young men taking selfies during the game (which plenty of sports fans do), their commentary wouldn't have been nearly as derisive.

Even if others think young women like the above baseball fans look shallow and ridiculous while taking selfies, recent research has suggested that selfies might not be more empowering than we might think. UC Santa Cruz professor Derek Conrad Murray has argued that for young women, taking selfies provides a "means of self-expression" by allowing them to take ownership of their own images instead of subjecting themselves to the male gaze.

That's why women on social media are calling bullshit on the announcers' sexism and hypocrisy:

While we'd love to give these dudes the benefit of the doubt, it's nevertheless troubling to see a group of young women mocked on national television by a pair of grown men. There might not be any crying allowed in baseball, but apparently, there sure is a lot of sexism.