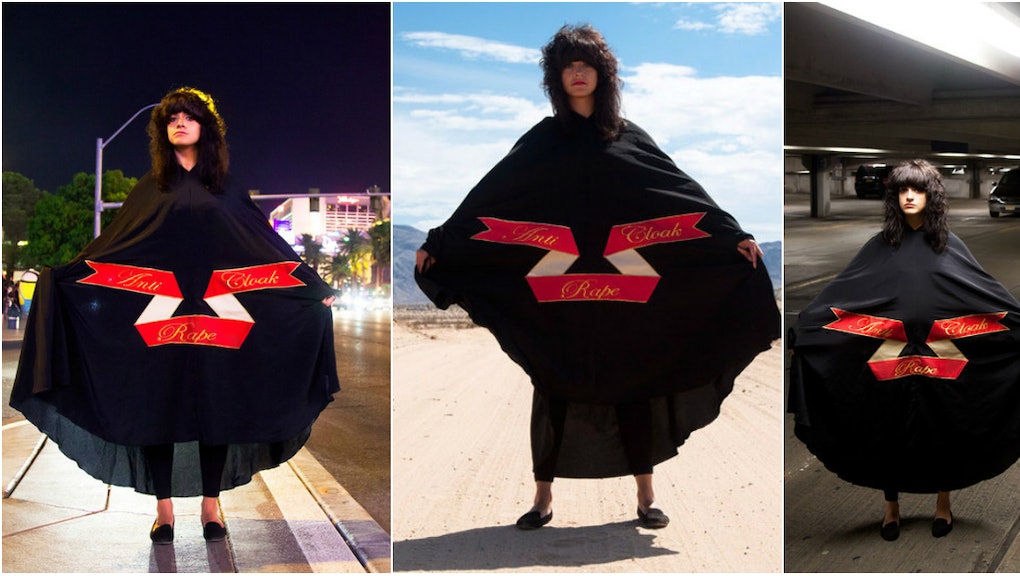 This Artist Is Silencing Rape Victim-Blamers With a "Rape Cloak"

One of the most problematic (and unfortunately pervasive) aspects of rape culture is the practice of victim-blaming, when rape survivors are told they're to blame for their attacks because of what they were wearing at the time.

Artist Sarah Maple isn't here for that bullshit, though. That's why for her latest project, she designed a full-out "rape cloak," which is intended to silence rape apologists who claim that victims were "asking for it" with their provocative clothing.

"I've heard so many stories from women, many of them friends, who were assaulted and never reported," Maple told Mic. She added that a number of these victims just blamed themselves for their attacks or simply didn't think people would take their claims seriously. "I hope this work will make people rethink the idea that the victim is somehow to blame. I hope it emphasizes the ridiculousness of this idea."

Indeed, the image of an ankle-to-neck garment covering a woman's entire body highlights the absurdity of those who argue that a woman's style of dress, no matter how provocative, could ever justify heinous acts of sexual brutality.

Maple wants to challenge the all-too-common idea that men simply can't help themselves from assaulting women when aroused. "I want to point out how damaging it is to think that men cannot cope with viewing a bit of flesh and turn into animals," she said. "It's a damaging view for both genders."

Maple isn't the first female artist to make a statement about rape culture and victim-blaming. Last year, for instance, Columbia student Emma Sulkowicz went viral for carrying a mattress around campus to protest the administration's decision not to expel her alleged rapist. And earlier this year, feminist German artist Elonë used maxi pads with various anti-sexist statements on them to protest rape culture.

While one can always expect misogynistic trolls to come out of the woodwork when rape culture is called out for what it is, people seem to be reacting positively to Maple's "Rape Cloak," which suggests that, precisely as she hoped, the project is starting a much-needed conversation about sexual assault.

"The response has actually been really great," she told Mic. "I hope it gets the message across."