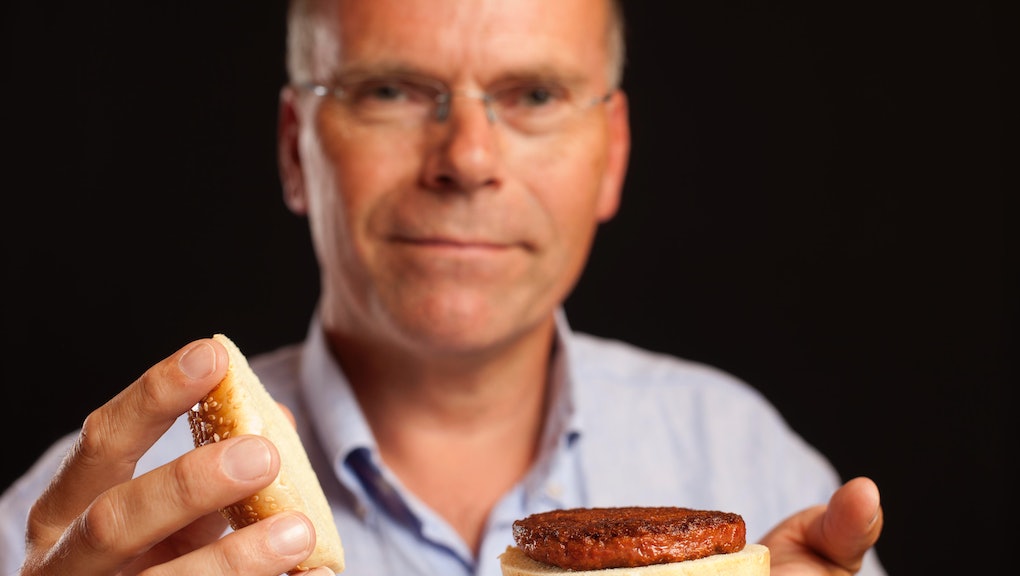 The Burger of the Future Is Low-Fat, Cancer-Free, Cruelty-Free, Sustainable and Kosher

If you're a planet-conscious carnivore, you've got a dilemma on your plate. Should you stop eating delicious animal parts just because the food industry is contributing to the slow destruction of Earth? Anyone who's had a bacon cheeseburger will understand why going vegetarian is a tough decision — even when the meat industry's impact on the world is undeniable.

A study from the Food and Agriculture Organization of the United Nations projected, by 2030, the average person is expected to consume around 45 pounds of meat annually — a number that rises substantially in the United States. The strain that will put on the planet is extreme, to say the least. But according to developing lab science, soon you can have your burger and eat it too.

What is cultured meat?

Scientists are already on the slow road to 3-D printing human organs. If you have the equipment to print human muscle, you have what you need to grow edible meat. All you need is DNA from the animal you want to print.

Lab-grown meat, also known as in vitro meat or cultured beef, is the product of animal cells taken from a living creature, placed in a petri dish and fed until they multiply and create new muscle tissue for human consumption. That's the theory, at least, of Mark Post, a professor of tissue engineering at Maastricht University in the Netherlands and the father of the sub-$12 bioengineered burger. Post found he could take 20,000 strands of meat cells to create a regular patty.

While his work is perhaps the most well known, smaller firms have started to rise in his wake, including programs specifically set out to find and fund other cultured meat research.

It's the American dream, grown in a lab.

New Harvest, a charity based in New York, funds researchers in academia and small companies trying to build a viable post-animal bio-economy — that is to say, a world where lab-grown animal meat is a frequent scientific pursuit.

"When people think of cultured meat, they think of a single product coming on market and that's the end of it," Isha Datar, CEO of New Harvest, told Mic. "We're thinking of a sustainable environment where there's an established academic community dedicated to cultured meat research. That community is a vibrant industry with many different players working toward the goal of making animal products without animals."

There's no reason this kind of research couldn't contribute to the American dream of a perfect burger. One with a tiny carbon footprint, no dead animals in its wake, no carcinogens and, best of all, totally kosher.

It's the American dream, grown in a lab.

Will lab-grown meat be low-fat?

As long as there's a market for low-fat meat, it will be made. Actually, it's pretty easy to do.

Here's one of the coolest parts about developing meat in a lab: Tissue is grown piece by piece, so you can customize the final product, the precise combination of fat and muscle. "You could either co-culture, so the muscle and fat are grown together, or grow muscle tissue in one place and fat tissue in another and mix them together afterward," Datar explained to Mic. It "allows you a level of control" that would be tough to replicate with animals.

So how do scientists replicate the marbling on a nice steak? It's actually saturated fatty acid, the kind that contributes to heart disease and Type 2 diabetes. Making your own fat in a lab means you can change the type — though unsaturated fats tend to come as liquid and don't have the structural reliability of the thicker saturated fats. "If they are going to make their own fats," Joan Salge Blake, spokeswoman for the Academy of Nutrition and Dietetics, told the Atlantic, "they will be able to replace the saturated fatty acids with, for example, omega-3 fatty acids," or the ones found in fish and eggs.

Just like with your milk and butter, your burgers could also come in different versions, such as "no cholesterol" and "no saturated fats."

There's a reason lions, tigers and bears can gorge themselves on steak and never make a trip to the oncologist, whereas a human diet heavy in red meat has been linked to colon cancer.

A sugar found in red meat, Neu5Gc, is produced in almost all carnivores except humans. Since our bodies aren't producing the chemical to fight back against that little sugar molecule, they treat the meat as an attacker, producing a toxic immune response and leading to inflammation that causes tumor growth. Scientists from the University of California, San Diego, School of Medicine discovered when Neu5Gc was given to "humanized" mice bred to not produce the sugar, they developed cancers at an alarming rate.

Since the field is new, reports of experiments removing Neu5Gc haven't been brought up. However, if Post's theory of being able to eventually cut cholesterol from burgers is applicable, and scientists have already been able to "humanize" mice by breeding them without the sugar molecule, we could eventually see labs figuring out how to grow meat without the potentially harmful chemical.

Plus, unlike animals that are raised on a farm, you don't have to deworm a cow's organs if those organs never existed in the first place. For now, those lab-grown meats need to be given antibiotics, since the lack of organs in the meat also means a lack of an immune system.

However, keep in mind given how much red meat is eaten worldwide every year despite potential health risks, the potential harms might not be on the top of the "need to fix" list when developing cultured beef.

"While Neu5Gc is something that I guess is a potential carcinogen, I don't think that's driving meat consumption downward," Datar told Mic. "The goal with cultured meat isn't to make a super-healthy meat product. It gets very confusing when you're trying to solve sustainability issues and make something that people will buy instead of regular meat and make it healthier. When we think of the people who eat meat, I think a lot of people aren't necessarily eating for health reasons."

Why is lab-grown meat more sustainable?

Being able to produce meat in vitro, or outside of the animal it would normally belong to, means also cutting down dramatically on the resources necessary to produce it. According to a 2011 study from researchers at the University of Oxford and the University of Amsterdam, producing roughly 2,200 pounds of cultured beef used at most 45% less energy, produced 96% less greenhouse gas emissions, used 96% less water and took up 99% less land than traditional beef production.

Think of factory farming like you would coal energy, Datar says. Before research into alternative energy sources began popping up, most of the world's energy was provided by coal power plants — dirty-burning behemoths racking up the planet's greenhouse gas emissions. As things like nuclear, solar and wind power came to light, it diversified the global energy portfolio, taking some strain off coal power, and in the same breath, easing up on the atmosphere.

"Factory farming is the coal power plant of meat eating," Datar told Mic. "If we diversified the portfolio of meat — where meat can mean factory, small-farm heritage or cultured meat — we create a more resilient system. Just like if it's too dark out for solar energy to work, so wind takes over, if a big epidemic virus wipes out all the factory-farmed meat, cultured meat can play a larger role."

Why is lab-grown meat cruelty-free?

The process for taking cells from a living cow is about the same as doing a biopsy on a human. Punch out a small amount of tissue from a living animal, freeze it and use it later to grow new meat.

Technically, that first sample could be used as the beginning for thousands of cultures after it, like a single dandelion seed spreading over a field until that ground is covered with new, fully developed flowers. Using that method, someone eating a steak in Idaho could be eating a biologically exact replica as someone eating a burger in Melbourne.

"It could even mean a cottage industry of heritage meats, encouraging biodiversity."

Though that would probably be a hassle, since finding cows around the world is easier than shipping a single strain all over the planet until every lab has a copy.

"It would be more realistic that we get tissue from more than one animal," Datar told Mic. "That allows us to use a wider variety of meat and could improve upon the meats we're growing. It could even mean a cottage industry of heritage meats, encouraging biodiversity in a sense because factory farming is so uniform."

Could lab-grown meat even be kosher?

The question hinges on whether lab-grown meat is, well, meat.

When your dietary laws are thousands of years old, getting a straight answer on something as modern and futurist as growing meat in a lab doesn't necessarily have a straight kashrut answer from the rabbinical community.

There are some factors to consider. For animal flesh to be certified kosher, it has to go through a specific slaughtering process, but the rules get murky when the animal you eat was never killed.

"The question becomes, 'What happens if you're talking about meat that was never part of living animal, so it has no need to be slaughtered?'" professor David Kraemer, author of Jewish Eating and Identity Through the Ages, told Mic. "The capacity to imagine meat being produced this way is very recent. Rabbinical authorities began engaging on this very recently. Some authorities say you have no problem as long as it's based on a kosher species. Others say it's ridiculous, because you can't have a kosher food without slaughter. There's no consensus about this."

Another school of thought is that lab-grown meat is an entirely new category. "At one point Menacham Genack of the Orthodox Union [Kosher Division] said he felt, depending on the process, that such meat could be considered pareve, neither meat nor dairy," Rabbi Morris Allen of the Beth Jacob Congregation in Minnesota told Mic. "The bottom line: It would create a major new opportunity to people rushing in to certify the kashrut."

We might not see bioengineered burgers frozen into meat pucks and sitting in your grocery-store freezer aisle this year. But given the amount of research and attention the concept gets, it doesn't look there will be a lull in its progress any time soon.

"It's surprising who isn't opposed to it," Datar told Mic. "There are ranchers who get in touch to say this is the future because they work in the present [of farming] and we can't do it for much longer. As far as meat-production companies, I think we're on their radar, but it's not taken very seriously. Yet."

For most people, though, it'll come down to one factor: How's the taste? As one nutrition scientist summed up Post's product: "Close to meat."