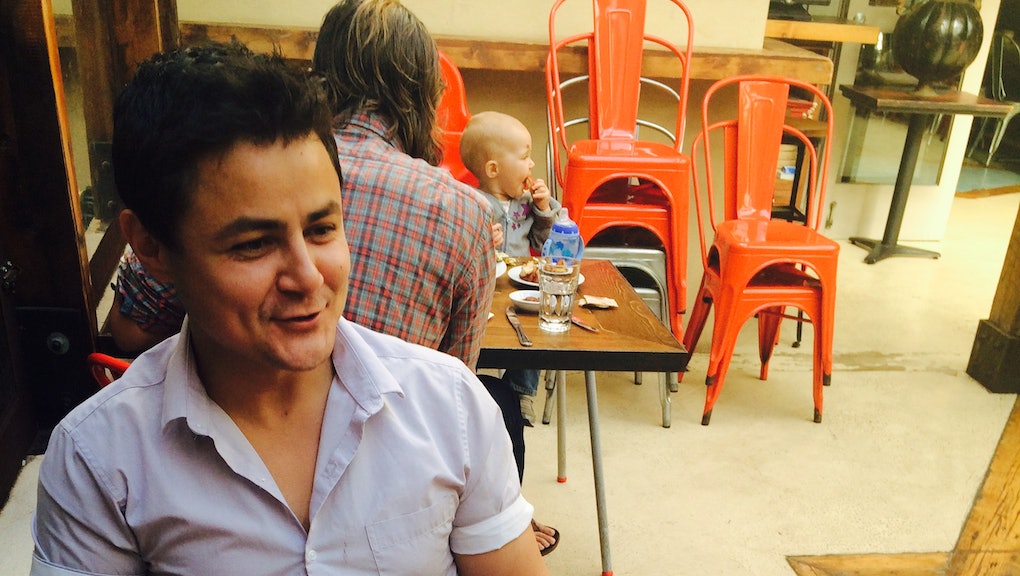 Arturo Castro entered one of his favorite spots, Café Mogador in Brooklyn, New York, wearing a dark leather jacket, sunglasses and a slick demeanor; when he enters a room, everyone notices. But as soon as the Broad City actor opened his mouth, he overflowed with warmth and charm.

Below the jocular surface, there's an activist and intellectual determined to use his talent for good. "I love comedy because it's disarming," Castro told Mic, devouring his poached eggs. "Two people may come from a different place, but they have things in common, and for me, the easiest way to point that out is the things that we laugh at. You don't need to be rich to laugh at something cool, you know?"

On Broad City, Castro plays Ilana Glazer's enchanting roomate Jaime, but in between shoots for the show's third season (which he hints will feature plenty of naked Jaime), the actor has been slaying over at his own show, Alternatino, which starts streaming Monday on ComedyCentral.com. His show challenges the stereotypes that plague Latinos in a way that both educates and entertains. "What I'm trying to do is just amplify the breadth of characters Latinos can play," he said.

Castro, who came to New York from Guatamela more than 10 years ago, studied law briefly, and then studied acting at the American Academy of Dramatic Arts and Vassar College. Yet he kept experiencing a frustrating amount of type-casting. After running into Ivy League-educated Latino friends at auditions for drug dealer characters, he decided to take matters in his own hands and tackle the issue through his own show. With dehumanizing language about immigrants in the discourse and Republican presidential hopeful Donald Trump reintroducing the Mexicans-as-rapists trope, Alternatino comes at an opportune time. "Latinos have become the new talking point for every asshole with a microphone," Castro said. "I want to improve the image of Latinos on a worldwide level. Especially with racist politicians."

He knows about these damaging stereotypes because he's experienced them firsthand. Identities and preconceived notions were forced onto him the minute he set foot in the United States. "I enjoyed white privilege up until I realized I wasn't white," Castro said. "That's when I came to the states." He remembers being at an after-party for a small play he went to see to support his friend, and a director asked him if he was a "wetback" or if he had come here "illegally." In that moment, Castro realized that in the United States, people had put him in a box he didn't even know he was in.

At first, he tried to deny the identity that others ascribed to him. "About five years into it, I was like, instead of trying to be 'whiter,' I'm just going to really own who I am," he said. "I was going to change my name from Arturo to something like Joe Desant, because I didn't think people were going to be able to pronounce it. It's what makes me different. The things that I've seen and the places I come from are awesome. I came to terms with my Latino-ness, I owned it and I fucking love it."

Castro uses humor to effect change, but he also wants comedy to bring people together. "Alternatino came from me having a very international group of friends, Latinos, French, Americans, and realizing that we all laugh at the same things because we're the same," he told Mic. "And I thought, what an interesting concept to bring, to create a show about what makes us the same."

Even though comedy can be universal, it doesn't mean all our experiences are similar. Castro said he is inspired by the comedic abilities of those in dire situations. "People that are marginalized can tend to be funnier because there's nothing that breeds funny situations more than tragedy," he said. "Guatemalans are seen to be funny because they live in a constant state — violence is very random, and since it's a small country, everyone's affected personally: either you or your cousin or your cousin's girlfriend that got mugged. When you live in this constant state of tension, you need that release."

That comedic release is what he's trying to achieve in a series with sketches that examine the worst stereotypes about Latinos in the funniest way possible. But Castro doesn't just want to bust myths about Latinos; he's also interested in disrupting fallacies about all identities. "Abbi [Jacobson] and Ilana gave me the keys to my career," he said. "It's funny to me now, people are like, 'Oh, women can be funny too,' and I'm like, when were women ever not funny? You should have been around my house, if you think I'm funny. Thank God my sisters didn't pick acting, because they'd be running circles around me."

But Castro is hopeful. "Within the past, everybody's been so passively aware that Latinos are a growing demographic, but now you have second-, third-generation Latinos who are better educated, have better opportunities, will make themselves accounted for," he said. "We have a voice and we make it heard." Latinos aren't only growing as a share of the population: Their spending power is also rising exponentially. For example, Latinos make up 17% of the U.S. population and account for 25% of movie ticket purchases. If they aren't well represented in the media, they'll take their money elsewhere.

Castro may be a rising star using his platform to bring important issues to the forefront, but he also wants to share his success with other actors. "You don't chase the next level for fame or for accolades. You chase it so that you can get to a position where you can help people and really do something for other people," he said. "If you're lucky enough to do what you love to do, it's not an accident. It can't be something you hoard. You recycle it."