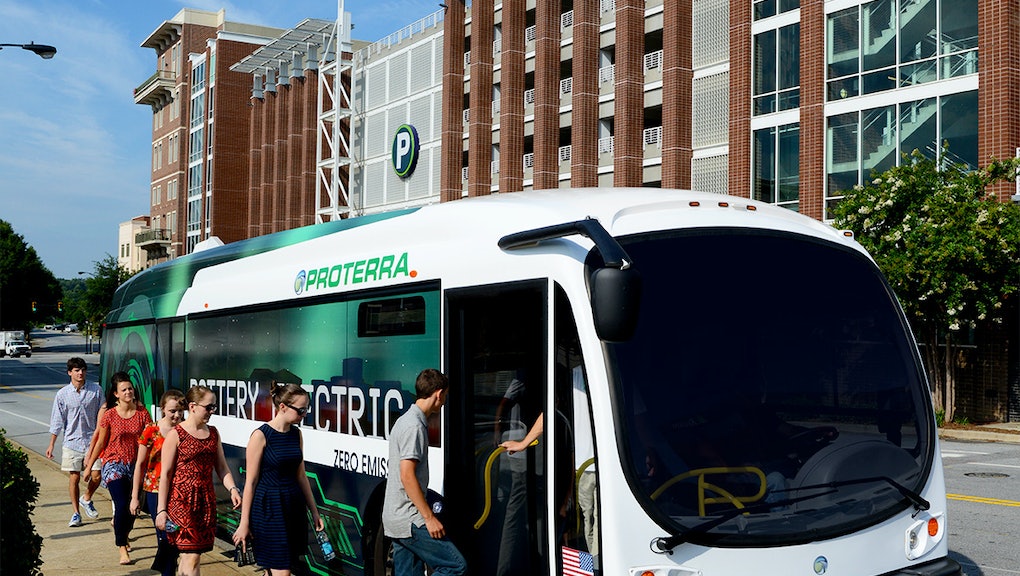 In the long, slow cruise toward cleaner vehicles, one of the major qualms remaining with electric cars is that they can't travel very far without charging — and once you're on the road, where are you supposed to charge them?

Proterra, a company that manufacturers buses that run solely on electricity, have now tested a bus that travels for 258 miles on a single charge. That's far enough to travel from New York City to Boston without having to stop for a charge, and more than enough to make the rounds on a metropolitan public transit route.

Proterra already has municipal customers and clients. The South Carolina-based company, which was launched by an early Tesla employee, makes the news every month or so for landing in a new city with a fleet of buses or completing another multimillion-dollar funding round.

Proterra's buses, which can get up to 35 minutes of travel out of just 10 minutes charging, have been replacing buses in cities such as Tallahassee, Florida; Reno, Nevada; Worcester, Massachusetts; and Los Angeles. Louisville, Kentucky, added 10 of the buses for the city's public transit system this past January, and it's estimated that the Proterra buses will save the city $300,000 a year.

Many cities are using local clean initiatives and stimulus money to pay for the buses, which, at $825,000, cost almost twice as much as a standard, fuel-guzzling diesel bus. But those extra hundreds of thousands of dollars can be justified by the money saved by using electricity instead of fuel. Proterra buses only use about 19 cents a mile in electricity, while most city buses burn off a gallon of diesel in nearly 4.71 miles. But the Proterra would make that money back over the course of a city bus' typical 12-year lifecycle.

Slate crunched the numbers: "A diesel bus can consume between $500,000 and $600,000 of fuel, while [the Proterra] would consume about $80,000 worth of electricity, based on average industrial electricity rates."

"What really bothers us is when a city blindly reorders 500 diesel buses," Proterra CEO Ryan Popple told Fortune. "You might as well build a new coal-fired power plant right in the middle of your city."