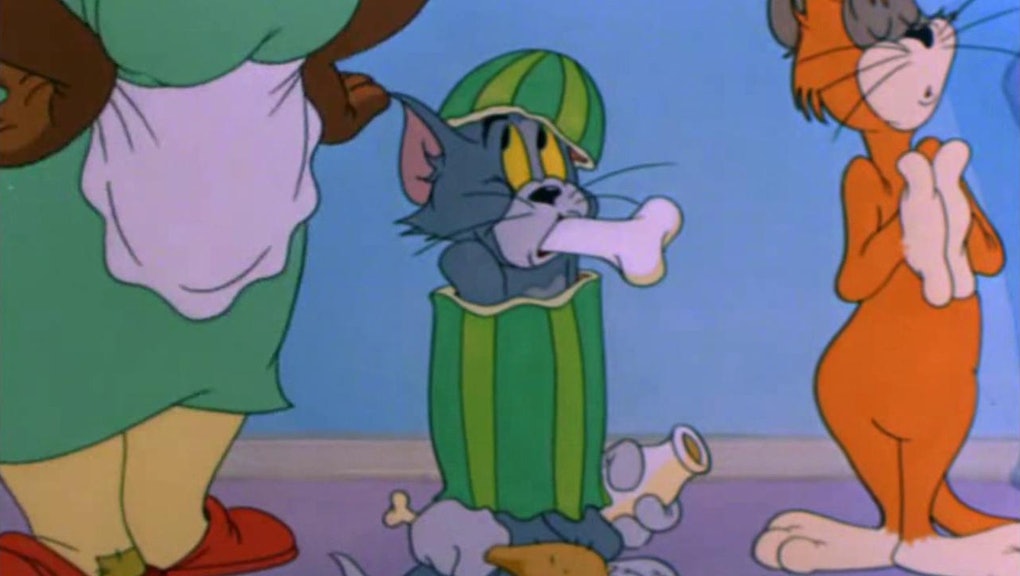 Examining the dark side of childhood is a popular theme online. Nickelodeon isn't diverse. The content of Disney's animated movies is "totally messed up." Disney's characters are racist. Their films are sexist. Without the rose-tinted glasses of childhood, beloved cartoons and stories often easily fall apart.

This isn't inherently bad — in fact, it's a pretty poetic metaphor for growing up. Morality falls into shades of gray. Bugs Bunny was kind of a jerk, while Daffy Duck was a misunderstood fowl with a speech impediment bullied by the cool kids. When more complicated questions of race and gender come into play, declaring something racist or sexist and writing it off is easier than substantively engaging with an ugly past.

Take the example of Tom and Jerry. The ultimate cat-and-mouse game, Tom the cat and Jerry the mouse attempted to outsmart each other for over 100 stories, all aired in the '40s and '50s by Hanna-Barbera and MGM. The pair was so popular they've been revived for projects, movies and more for years.

Upon first glance, Tom and Jerry seems like the ultimate childhood pleasure: simple, slapstick-filled and free of social commentary. Yet Tom and Jerry also featured a broad, racist caricature, a mammy character, for 12 years. Should we erase her in present day? Or should we wrestle with what she meant then — and what she means now?

The character, Mammy Two Shoes, served as one of the primary points of human contact for Tom and Jerry in the classic cartoons. Voiced by Lillian Randolph, a veteran black actress, Mammy Two Shoes' role was often that of disciplinarian to Tom. When he would cause chaos while trying to catch Jerry, she'd be there to punish him.

As a character, Mammy Two Shoes exhibited a lot of the stereotypical traits of the mammy archetype. Her dialect was deeply Southern, with improper grammar ("what is you doing" instead of "what are you doing," for instance) to boot. She wore an apron in most of her appearances, suggesting a service role in the house. Attempts to change these attributes were made in re-edits of the cartoons released in the '90s. In those, actress Thea Vidale dubbed over Randolph's voice without the character's accent.

After 1952, Mammy Two Shoes was replaced by other characters — a white couple in 1954's Pet Peeve, a blonde woman in 1962's Buddies Thicker Than Water. When some cartoons featuring Mammy Two Shoes aired again, they were edited, either with Vidale's voice or with another, white character created from whole cloth for the revised version.

It wasn't until MGM released new groupings of Tom and Jerry cartoons, the Golden Collection and Spotlight Collection, that much of the unedited Mammy Two Shoes stories saw the light of day. On the latter collection, actress Whoopi Goldberg even appeared to give a warning that Mammy Two Shoes might offend modern audiences.

In her statement, Goldberg's point is a remarkably nuanced one. Yes, in 2015, this character is clearly playing on a dated, offensive archetype and would never fly in modern work. However, Mammy Two Shoes was also an integral part of many of these stories. To edit her out would be to fundamentally change the cartoons and erase history.

That would be a mistake. As others argued when a "diversity warning" was added to old Tom and Jerry cartoons on Amazon, seeing and evaluating Mammy Two Shoes in historical context is vital. If anything, we need more modern children's entertainment with positive representation of all kinds of kids to provide contrast. It's a thorny issue, but not one from which we should shy away.

Mammy Two Shoes is not a fun fact to be hauled out for a listicle. Her place in history is complex and difficult to parse. She and other racist characters, including the ones in those Disney cartoons, should inspire debate. How far have we come? Where do we still need to improve? Problematic depictions shouldn't be erased from the record to make things cleaner.

Think of it this way: In 2015, we can be shocked when watching Tom and Jerry re-runs. We can look at Mammy Two Shoes and evaluate her as a racist, harmful stereotype. With time comes objectivity and understanding. So which characters from modern cartoons will our children see in the same negative light in the decades to come?