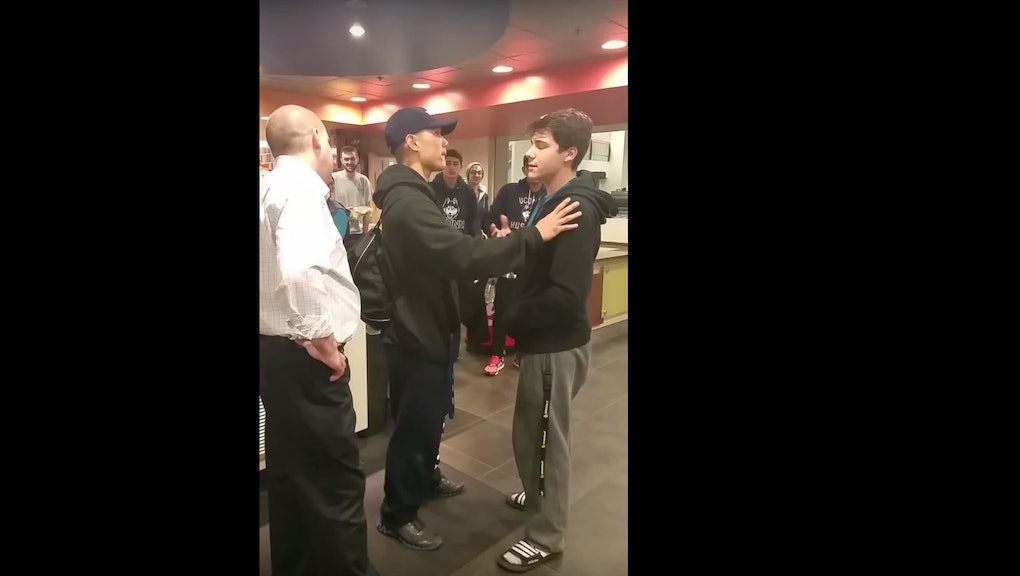 A video of an underage University of Connecticut student drunkenly yelling at and assaulting cafeteria employees at the school's Union Street Market has gone viral for all the wrong reasons.

The awful incident, apparently inspired by the student's desire for bacon jalapeño mac and cheese, was posted to YouTube on Oct. 5 and had already racked up more than 98,000 views by Tuesday afternoon. Over the course of the nine-minute video, the student drops virtually every bigoted term imaginable:

"You're not welcome here," a cafeteria manager tells the drunken student. "You have booze on your breath. You told me you're underage. I just saw you with a bottle of booze — you just drank it in front of me."

"Your job is a fucking joke," the disorderly patron says, dropping other insults like "fucking idiot," "fag" and "retard." When other cafeteria employees attempt to intervene, he insults them too. Eventually, the man shoves the manager, at which point he is tackled by the manager and another employee who says, "I told you! You don't touch my boss."

"Fuck! I'm absolutely fucked!" he yells when police eventually arrive to arrest him. "What the fuck happened to my shoes? Shit!"

The student can be seen spitting in the manager's face during the video.

Twitter users were quick to label the exchange as an example of white privilege. Some speculated that if the drunkard had been a person of color, the police would have arrived sooner and more aggressively:

Barstool Sports identified the student seen in the video as Luke Gatti, who the blog Only in Amherst refers to as a "repeat party offender." That blog posted police documents in 2014 showing Gatti had been involved in a similar disturbance that year while in Amherst, Massachusetts, and which show Gatti is from Bayville, New York.

Gatti did not respond to a request for comment via Facebook from Mic. University spokesman Tom Breen sent Mic a copy of the police report from the night of the incident:

The Hartford Courant confirmed Gatti's name and says that university police charged him with breach of peace in the second degree and criminal trespass, with a bail of $1,500 and a court appearance scheduled for Oct. 13.