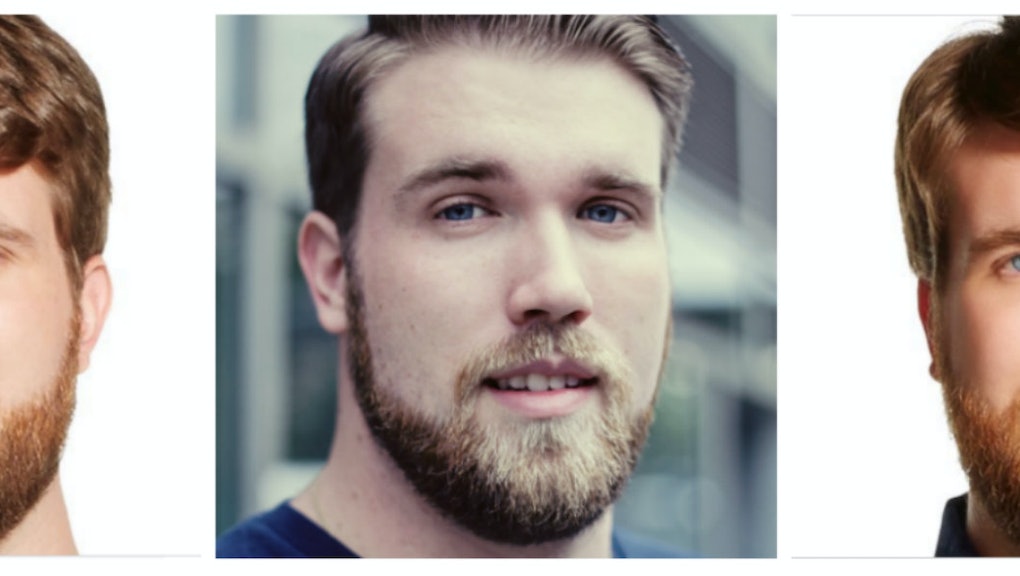 If you scour Target's website for a men's big-and-tall flannel shirt in a blue plaid, you might scroll right past him. Ditto for the navy long-sleeve heavyweight thermal. But, if your sartorial Web surfing brings you to, say, a denim shirt in dark blue or a cement-colored long-sleeve hoodie, you'll spot Zach Miko.

At 6-feet-6-inches, with a 40-inch waist, he doesn't have the V-shaped buff body of most big and tall sections. But what's behind the man in the ads? Well, clips and pins, actually.

"The first day [of the shoot], they were supposed to send XL tall shirts, and every shirt they sent was a medium regular, which I cannot fit into under any stretch of the imagination," Miko told Mic. "They had to cut every single shirt and open it up like a hospital gown."

Zach was the lone Dad Bod in a sea of washboard stomachs and slender frames. The stylist told him he was the first model to wear a slit-back button down ever.

Becoming the only average-bodied plus-size male model on Target's website is a surprise to Miko, who told Mic he wears clothes until they fall apart and doesn't understand why people peruse clothing racks for fun.

"You're never confronted with how big you are until you find something that doesn't go on your big-ass body," he said.

Miko's ads caught the eye of Bruce Sturgell, the founding editor of Chubstr, a lifestyle website dedicated to helping men of size find, create and share their style with the world. Chubstr has an affiliate deal with Target, which means he is able to choose Target clothing for inclusion in a curated Chubstr shop.

"Seeing this model up on their site was a little surprising for me," Sturgell told Mic. Though Sturgell lives in the world of big and tall, body-positive fashion, he still says Miko is unique.

"You tend to see the tall side of big and tall," he said. "He is kind of a unicorn. There's not a lot of guys like that, especially if you're looking at catalogs or websites."

Recent headlines corroborate Sturgell's observations. In January, the Telegraph asked, "Why Are There No Plus-Size Male Models?" In July, Business Insider ran a piece titled "Men Are Facing a Huge Double Standard in the Fashion Industry."

Plus-size women have stormed New York Fashion Week and models like Tess Holliday have set out to create clothing lines for women of size, but no male name-brand equivalent has yet surfaced.

Chubstr aims to fill that void while the industry plays catch-up. After an unsuccessful shopping trip to his local mall, Sturgell complained about his experience on a Tumblr blog, but then realized that this was worth more than a rant: It could be a brand. He began to become a guru to other men of size seeking fashion advice.

"They started asking questions about their own outfits. They wanted advice on what to wear for job interviews," he said. Sturgell said he believes his positive reception shows that men of size are sorely lacking entry-level knowledge in fashion. Aside from tips on where to find flattering clothes, his site teaches the basics of how to tie a tie, how to match and how to pull a look together, after being told for decades that there was no room in the industry for them.

While the U.S. boasted more than 6,000 plus-size women's clothing stores that generated a combined $9 billion in 2014, less than 1,000 stores existed nationwide for plus-size men. They generated about $1 billion.

Sturgell said companies are hesitant to display male models for fear of turning off their audience. They fear "the people they're trying to target won't see them as aspirational," he said.

Though now a model for a major U.S. retailer, Miko said he once felt iced out of fashion because of his size. Miko is an actor who is used to criticism about his size. While he often gets callbacks, he's usually deemed too tall to be a leading man, but not exactly large enough to be play the television version of a character of size.

But his budding modeling career has given him new confidence. "I don't give a shit if I ever have ripped abs and look like an Abercrombie and Fitch model. I never want that," he said.

Miko met his wife, Laura, on the set of a Web series they shot together. Though her husband is naturally confident, Laura Miko told Mic she saw some of his frustrations with the fashion world and with his own body wilt away once he landed his modeling gig.

"Once he started modeling for Target, he was like, 'I'm finally wearing clothes that fit me and they look good. Everything that I put on hangs in the right spot and looks good,'" Laura Miko told Mic.

One night, after a shoot, Zach Miko came home, and they sat together in their living room.

"I told Laura after my second day, 'I don't ever want to be a small guy, and I'm tired of being told that in order to be in this world, I have to be smaller,'" Zach Miko said.

But, if you ask Laura Miko, she never even knew about his fear. And she never doubted he'd excel at modeling, either.

"He's got such a photogenic face, you just get lost in his eyes," Laura Miko said. "He's every man's guy. The guy every guy wants to be around."

Sturgell said Zach Miko's presence in the modeling world is "an amazing step in the right direction." He is positive that change is coming to male fashion and that men of size have something to look forward to: confidence.

"You'll see a bigger guy go to an online forum or a subreddit and ask for advice and the advice that they're getting is to lose weight or exercise," Sturgell said. "There should be options for men as they are currently. We aren't there only saying, 'We need bigger sizes.' We're looking for solutions and we're finding them. That's not to say we don't want to see more options, but part of it is, we have to deal with what we have now."

And what we have now is Zach Miko, who proves that clothes do make the man — more confident.

Though his first modeling experience, wearing a cut-up shirt with an exposed back, is behind him, the memory is still fresh. "It's the first time I ever put on clothes that made me feel good about myself," Zach Miko said. "Well, that's not true; my wedding suit was awesome."