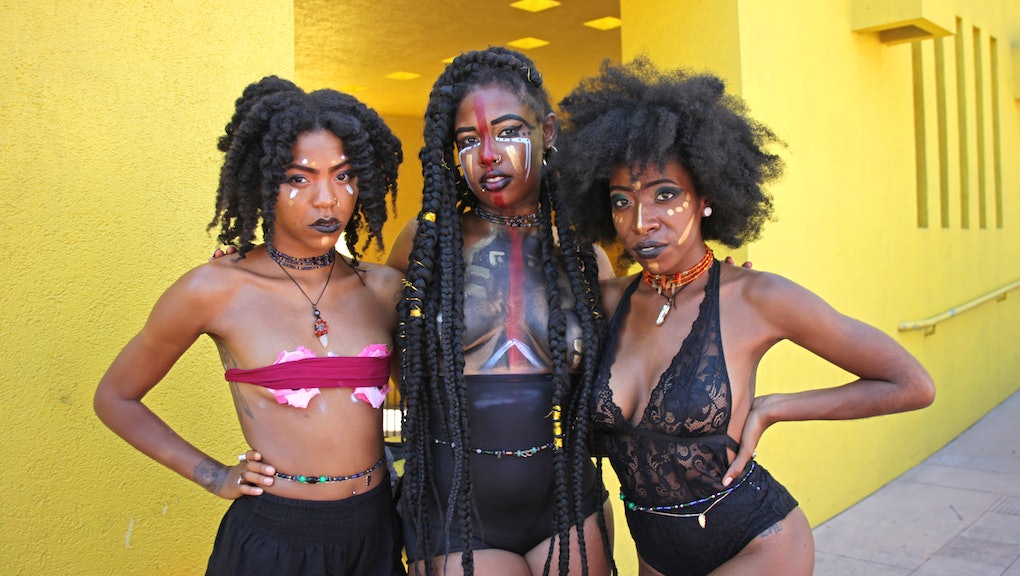 Hundreds of people converged in downtown Los Angeles Saturday afternoon to march against slut-shaming and sexual violence at the Amber Rose Slut Walk. Some participants arrived dressed in jeans and T-shirts, while others dressed in outfits much like model Amber Rose, the organizer of her first-ever eponymous slut walk, who wore black lingerie, sunglasses and her signature blond, short-buzzed hair, of course. Some came wearing even less. The meaning behind this demonstration was universal, though: No one should feel shamed or be shamed by others about their own bodies.

Here, 16 people tell Mic why they were there Saturday, what they've experienced in the past and why slut-shaming has got to go.

Mic: Have you ever been called a slut?

How did you pick out your outfit today?

Why are you participating in the slut walk today?

Maddy: Yeah, it was a word rooted in hate, and we just made it into a joke, like, 'Oh you're such a slut.' We started calling people that and we don't realize how it's oppressing us.

What is one thing you would say to someone who has slut-shamed you?

Why are you participating in the slut walk today?

Amiri: Yes, definitely. I can speak for all three of us when I say that we're all very liberal and free, and we like to not wear clothes because we were born like this. It has nothing to do with pleasing anyone else or displeasing them, though people love to vocalize their displeasure. However, I will always boldly be myself. So will they, and I will always support my goddesses in doing the same!

What would you say to someone who has slut-shamed you?

Amiri: To anyone who has slut-shamed me, fuck your patriarchy. Excuse me, I don't know if you can put that, but that is what I would say. I would say fuck that, fuck your social conditioning,and everything else that you think about me because it's not about you and I feel the freest, the proudest, the most self-confident that I've ever been, and I'll continue to embrace that in my truth. That's what I would say!

Have you ever slut-shamed anyone?

Trinity: Maybe in younger years before I realized that genuinely everyone being themselves is just so important.

Some of the girls here told me they were actually catcalled on the way here. The other things I've noticed is we're media, but there's other men who are here who aren't media, they have cameras and they're stopping and taking photos and being inappropriate. Is that common?

Yeah, unfortunately, yes. I mean, one of the greatest examples about addressing that was I think in Seattle a few years ago, they actually asked members of the kink community to come out and form a wall in front of people who were making participants feel uncomfortable. We're here because sexual violence is so rampant. Victim-blaming and slut-shaming is embedded in the way that we talk about sexual violence, and so there are a lot of people who think that this is funny, that rape is a joke, that it's normal or it's OK.

How powerful is it to have young women represented here?

What's amazing is that a lot of people have been like, "Oh, it's just a bunch of promiscuously dressed women getting together in the streets." Historically, people come with their families, or people come with children. I've seen kids as young as 4 carrying a sign that says, "Even I know to keep my hands to myself." These are conversations that young people understand and they can be a part of, which I think is amazing because they have to be, because if we look at slut-shaming and the sexism that's rampant in high schools and teenagers, young women, they get this. I've heard a lot of women say, "I don't know about feminism, I don't really understand it, but I know what its like to be called a ho, and it sucks, and I love that I can come to a place and be around people who understand that what I wear and what people think that I have or have not done doesn't impact my safety or respect."

So you plan to talk to your son about these kinds of issues?

Jen Richards, I Am Cait

Why are you at the slut walk today?

I'm here because I'm exhausted by having to worry about public harassment every time I leave my house. I can't go anywhere in public without being catcalled, whistled at, have cars stop or have men proposition me. It's been that way for years. It's exhausting, and it's not OK. I was someone who wasn't comfortable with my body for a long time in my life and as an adult, I'm learning to really enjoy my body and own my body, and it doesn't make any sense to me.

How important is it for you to see trans women represented in slut walks?

It's really nice that there are trans women here, because I encounter most of the same issues that any other woman does while moving through public, but then I have additional intersections as a trans woman, like every time I meet a guy in public, I'm always worried about what's going to happen when they realize I'm trans. I've had situations when men were hitting on me in public and being really, really aggressive, and then once they realize I'm trans, they suddenly go from desiring me to wanting to hurt me. It can happen really quick.

Why are you participating at the slut walk today?

I saw your sign. So as a gay man, does this event hold any special meaning for you to be here today?

How important do you think it is for intersectional women to be here and show support and also show the diversity of who experiences sexual harassment?

How important was it for you to be here and to walk the slut walk in heels?

What is something you've always wanted to say to someone who has catcalled you?

Is it empowering to be here at the event by yourself and to see that there's many other women that came here alone as well?

Why did you come to the slut walk today?

It all puts it very much in perspective, and we see people bring up the people who are against feminism, they will say, "Well, what about men's issues?" And there are issues that do affect men, but when we take a step back and take a look at the bigger picture, we realize that these are very specific and limited issues compared to issues that women, trans people and everyone else faces. It has to be considered in that context as well.