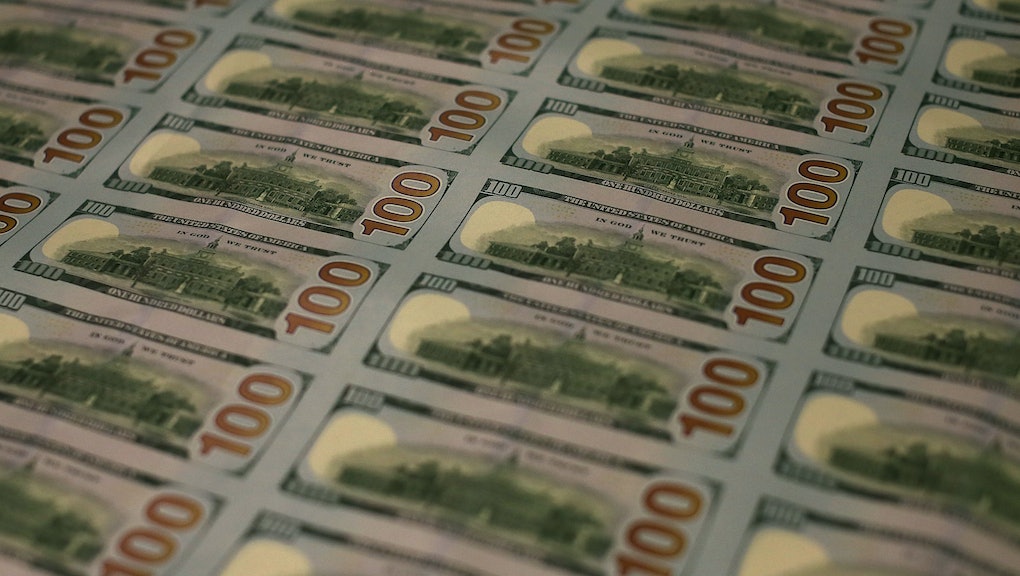 That's the amount of money held overseas by the United States' 500 largest companies, a new study has found. The cash is stashed in various havens around the world, largely for the purpose of evading U.S. taxes.

The study was jointly conducted by the Public Interest Research Group and Citizens for Tax Justice, using financial disclosures from companies on the Fortune 500.

The hoard of cash — worth just slightly more than the gross domestic product of India, the world's 9th largest economy — would generate roughly $620 billion in taxes if it were repatriated to the U.S. and taxed at the current corporate tax rate, according to the study.

Among the biggest individual offshore holders were Apple, with $181 billion abroad, General Electric with $119 billion, Microsoft with $108 billion, and the drug company Pfizer with $74 billion, Reuters reports.

The money is kept abroad largely to avoid U.S. corporate taxes, which are among the highest in the world at 35% and the highest among the developed nations comprising the Organization for Economic Cooperation and Development.

"The amount of taxable income that U.S. corporations hold overseas is a staggering number. The U.S. Treasury could benefit from the repatriation of over $600 billion," Leslie Wayne, a business journalism professor at Columbia University who has written extensively on corporate tax avoidance, told Mic. "Even more, these companies benefit from being U.S. corporate citizens. They get the protection of U.S. laws and yet are not willing to pay their fair share in taxes."

If the money were repatriated, the taxable revenue alone would be more than enough to wipe out the current U.S. federal budget deficit. Concrete proposals to do so, however, have tended to be more modest. In his proposed 2016 budget, President Barack Obama included a provision for a one-time tax of 14% on the overseas cash in an effort to entice companies to move their money to the U.S. A proposed tax on subsequent offshore earnings of 19% would be used to improve the nation's infrastructure, which today is broadly viewed in a state of disrepair.

For corporations, current rules allowing them to take advantage of generous offshore tax rates is simply par for the course. "It's perfectly normal and appropriate for companies to seek to optimize tax efficiency. In fact, not to do so could be viewed as an abrogation of the duty management owes to shareholders," Peter Rajsingh, an adjunct professor of finance at New York University, told Mic. "The answer is probably to lower corporate taxes to incentivize on-shoring."

The idea of a one-time tax has even attracted some measure of bipartisan support, with watered-down iterations of Obama's plan being floated by Republican presidential candidates Donald Trump and Jeb Bush.

Moves from either party to tax foreign income will likely prove a heavy lift, however, and run into strenuous opposition from affected businesses. When asked about such proposals. Rajsingh was pithy.