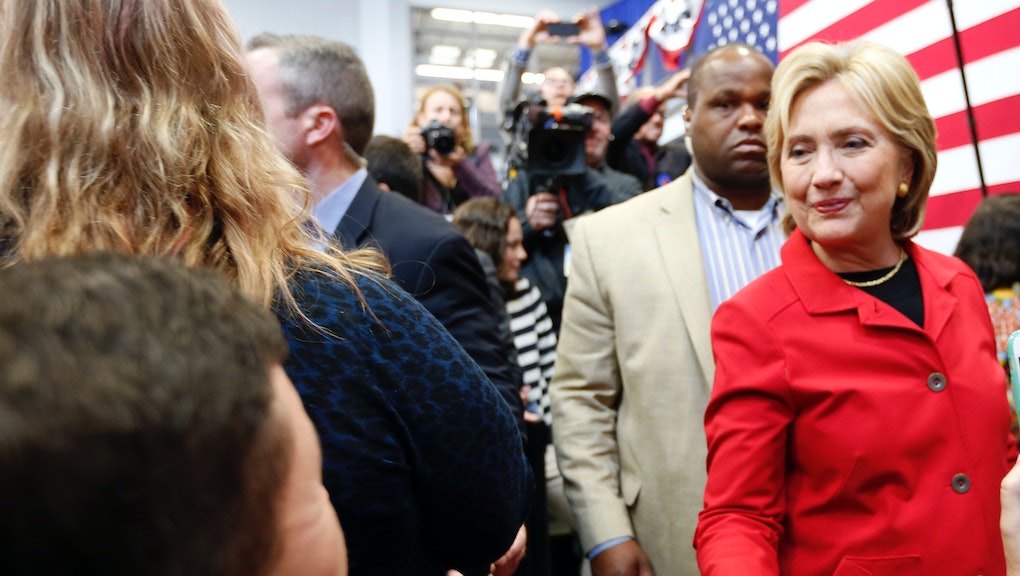 The star of Hillary Clinton's first nationally televised ad of the 2016 presidential cycle is a powerful Republican congressman who went on Fox News and linked his colleagues' Benghazi panel with the candidate's slip in the polls.

Questioned about his strategic vision during an interview with host Sean Hannity, House Majority Leader Kevin McCarthy, the California representative likely to become the next speaker, pointed to the GOP-led investigation as evidence of his commitment to the Republican cause.

"Everybody thought Hillary Clinton was unbeatable, right?" McCarthy said. "But we put together a Benghazi special committee... What are her numbers today?"

With that, a voiceover cuts in.

"Republicans have spent millions attacking Hillary because she's fighting for everything they oppose, from affordable health care to equal pay," the narrator intones.

The argument: The 30-second ad, which is scheduled to run on cable news channels beginning Tuesday, marks the latest attempt by Clinton and her allies to portray Republicans as willing to use any issue to "derail" her candidacy.

McCarthy, who has come under fire from his colleagues for undermining the committee's political legitimacy, fired back Tuesday morning.

"The mission of the Select Committee on Benghazi is to find the truth — period," he said in a statement, which defended the work of the panel as "beyond reproach."

He continues: "The serious questions Secretary Clinton faces are due entirely to her own decision to put classified information at risk and endanger our national security" — a clear reference to the controversy surrounding Clinton's use of a private email account and server during her time running the State Department.

Hours earlier, a spokeswoman for outgoing House Speaker John Boehner dismissed the ad as an "attempt to distract from her record of putting classified information at risk and jeopardizing our national security, all of which the FBI is investigating."

Clinton will be on Capitol Hill to testify before the Benghazi committee Oct. 22.

The trust factor: After McCarthy's initial comments aired, Clinton press secretary Brian Fallon accused McCarthy of having "confessed that the committee set up to look into the deaths of four brave Americans at Benghazi is a taxpayer-funded sham."

The remarks, Fallon said in a statement, confirm "Americans' worst suspicions about what goes on in Washington."

Clinton, who turned over 55,000 pages of correspondence to the State Department late last year, has denied any wrongdoing. When the New York Times first reported the story, an aide said she followed "the letter and spirit of the rules." But questions centering on her motivation for using the home-brew system, which could have had the effect of shielding conversations from public scrutiny, have lingered.

A Quinnipiac poll, conducted in late August, found that 61% of likely voters believe Clinton is not "honest and trustworthy." Her once overwhelming lead in the Democratic presidential primary has narrowed. In a Politico story out Tuesday, at least "one small contingent of family allies" say they believe she is doomed in early-voting New Hampshire.

Watch the ad, titled "Admit," below: