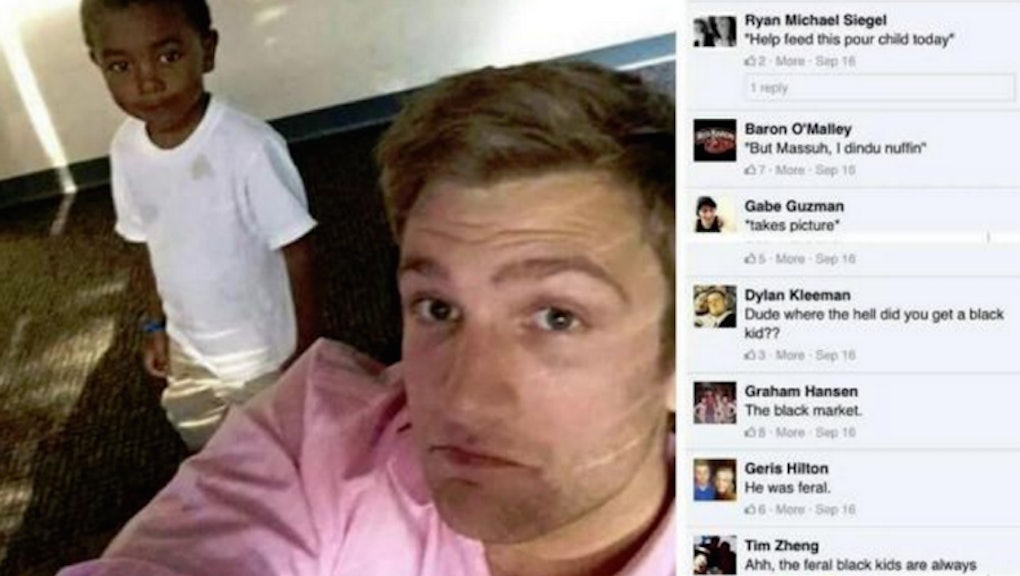 After a white man posted to Facebook an image of himself with his colleague's 3-year-old, accompanied by racist comments both from his friends and himself, people who caught wind of the viral story got justifiably pissed.

Facebook friends of Gerod Roth, also known as Geris Hilton, proffered a range of extremely offensive comments, including "I didn't know you were a slave owner," "'But Massuh, I dindu nuffin,'" and "Send him back dude those fuckers are expensive."

In response to, "Dude where the hell did you get a black kid??" Roth wrote, "He was feral" (which, incidentally, garnered six likes).

A few things happened next.

First and foremost, Sydney Jade, the mother of Cayden, the little boy in the picture, started the hashtag #HisNameIsCayden in defiance of the derogatory and objectifying remarks which accompanied Roth's photos of her boy — and it took off.

Next, Roth, aka Hilton, lost his job at Polaris Marketing Group in Atlanta, Georgia, where he and Jade worked together. The firm posted a statement on its Facebook account on Friday deploring what Roth had done. They made it clear there was no tolerance for racism or the exploitation of small children.

The Twitterati caught onto this, too. Many who employed the hashtag #HisNameIsCayden celebrated the company's decision to fire Roth.

Emily Irene Red, the woman who wrote, "I didn't know you were a slave owner," was also fired from her job at The Conch Republic Grill, the Root reports.

Roth did not make matters better for himself when he went on Fox 5 to say the comments were taken out of context and that he'd been targeted, just like Cayden had.

"I just really feel upset, not only with myself, but also with the character that was based off of the comments that my friends had made," Roth said in the interview.

Cayden's mother is determined to make a larger point about how there is no place for racism in modern America, particularly when small children are the subject of it.

"On Friday morning, when this happened, I didn't expect this massive outpouring I'd get in the next few days," Jade told the Atlanta Blackstar. "I never in a million years expected it to be this massive. If it has to start with us, I'm going to finish it.  It was my son put in the limelight. And not only my son but a child, a 3-year-old, someone who can't defend himself."