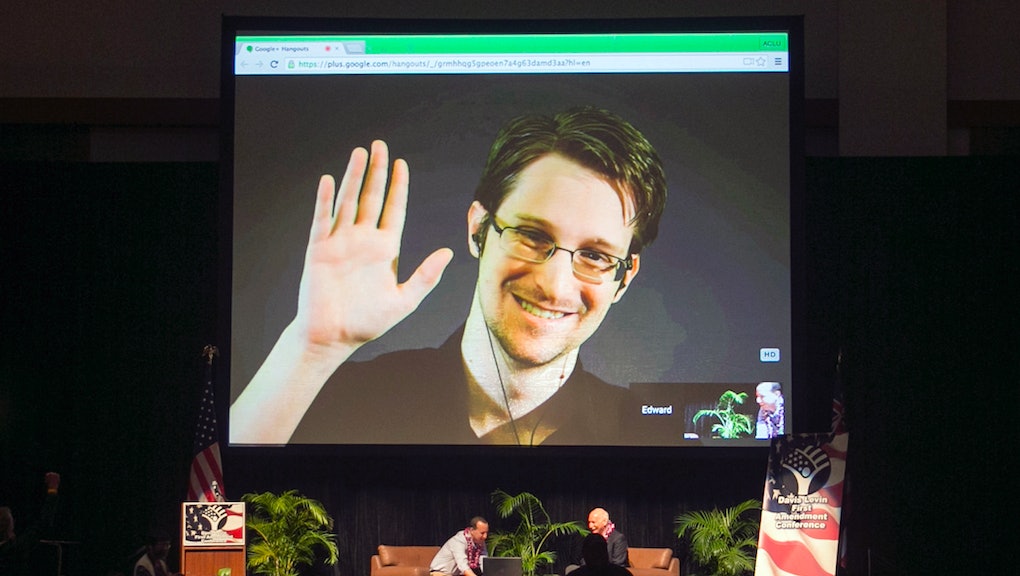 The world's most notorious whistleblower has some new, startling news: Your smartphone can be taken over with an invisible text message.

Edward Snowden, who's been living in Moscow since 2013, said in an interview with the BBC that the United Kingdom's intelligence agency, Government Communications Headquarters, can gain access to your phone by sending it an encrypted text message. Once it happens, the agency can turn the phone off and on, pick up audio via the microphone (even when the phone is off) and photograph you.

"They want to own your phone instead of you," Snowden said about both the GCHQ and the United States' National Security Agency, according to the BBC.

"The Smurf Suite": That's what GCHQ calls the set of tools it uses for this purpose, Snowden told the BBC. They have names like Dreamy Smurf, for turning the phone off and on; Nosey Smurf, for using the microphone; Tracker Smurf, for geo-locating the phone; and Paranoid Smurf, which can keep tech support like Apple's Genius Bar employees from knowing the phone has been accessed.

"It's a self-protection tool that's used to armor [GCHQ's] manipulation of your phone," Snowden said. "For example, if you wanted to take the phone in to get it serviced because you saw something strange going on or you suspected something was wrong, it makes it much more difficult for any technician to realize that anything's gone amiss."

The technology is what's called an exploit, or something that takes advantage of a software weakness — the modus operandi of hacking. According to Snowden, the special text message goes to your phone, and you pay for it like any other text — but you'll never actually see it in your inbox.

Americans should be concerned too: The NSA probably has its own version of the Smurf Suite, Snowden told the BBC.

"GCHQ is to all intents and purposes a subsidiary of the NSA," he said. "They [the NSA] provide technology, they provide tasking and direction as to what [the GCHQ] should go after."

According to the BBC, the NSA has spent $1 billion on similar technology, officially used to combat terrorism, "but to find out who those targets are they've got to collect mass data," Snowden said.

If Snowden is right, technology exists that allows the government to fully infiltrate and occupy your smartphone without your consent or knowledge. That makes us consider charging up that old, camera-free Nokia brick phone.