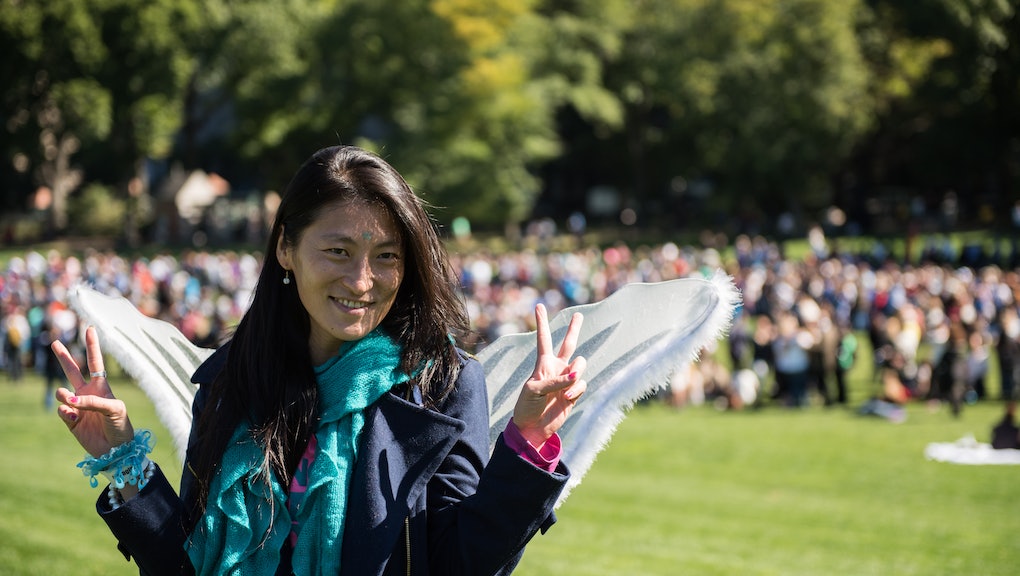 John Lennon would have celebrated his 75th birthday this Friday. To celebrate the milestone, Yoko Ono, his widow, attempted to organize a party and a gift for him in New York City's Central Park. She invited the world to come and break a world record in Lennon's honor: arranging the world's largest human peace sign, a sign that essentially epitomizes Lennon's activism.

Fans came from all over — Italy, Venezuela, Ohio — to answer the call. Activists brought signs protesting war in all its forms. An unexpected number of children field tripping from several New York City schools sat singing along to tunes from the Beatles catalog piped through the loud speakers.

"We are more connected globally now," Luz Cano, a 14-year New York resident from Argentina, told Mic, marveling at the diversity. "I think younger generations are more aware of trying to make the world a better place and create peace."

The age range between the youngest and oldest participants was vast. However, it revealed the event's deeper significance: Beyond creating a visual tribute for Lennon, it was an opportunity to pass along the late artist's message to the next generation.

"If we instill in our children an understanding of peace and a sense of creativity, we have a shot at a better world," Brian Rothschild, the executive director of the John Lennon Educational Tour Bus, told the crowd of the organization's mission.

Teachers from the Castle Bridge School in New York City's Washington Heights seemed to think the kids were getting the message. Leading up to the event, Sally Cleaver had been working with her kindergarten through fourth grade students discussing the lyrics to "Imagine."

"These are New York City kids," Cleaver told Mic in a thick New Zealand accent. "They know about peace; they know about war. They get it."

Still, it wasn't an easy song to teach. "I have to be careful because I'm saying, 'When [Lennon] says, "Imagine there's no religion," that doesn't mean you shouldn't go to church with your nana on Sunday,'" she said. "'He means people fight over religion. Imagine if it wasn't there; what would they fight about?' Of course one kid said, 'They would just find something else to fight about,' which is probably right. But you've still got to try."

Former teacher and mother Erin Rodgers has been raising her son, Lou, named after Lou Reed, on the Beatles. "Who's on your shirt?" she asked him. He managed John, Ringo and Paul before repeating Ringo trying to think of the fourth member of the band.

"I think it's really important for the kids," she told Mic. "Some of the older people in the audience have been doing this for a long time, and in this day in age it's something that we need to be constantly reminded about because there's so much tension in the world."

There was a ton of political tension in Lennon's time as well, and he relied on music to try and direct towards more productive ends. He voiced his discontent with all forms authorities that utilize violence to assert their will in songs like "Give Peace A Chance" and "Imagine." Alongside his wife Ono, he organized massive benefit concerts calling for the release of political prisoners, such as peace activist John Sinclair with his 1971 Freedom Rally. Lennon was tremendously outspoken against Vietnam War, staging creative nonviolent forms of protest such as his iconic Bed-In protest.

"What we're really doing is sending out a message to the world, mainly to the youth, especially the youth or anybody, really, that's interested in protesting for peace or protesting against any forms of violence," Lennon once said of his Bed-In protest. "[W]e think that peace is only got by peaceful methods, and to fight the establishment with their own weapons is no good, because they always win, and they have been winning for thousands of years."

Some of the older attendees clearly had been engaging in Lennon's brand of artistic activism for a long time. Rob Kennedy had scores of stories describing how Ono used to rat him out when he worked at the Dakota, Lennon and Ono's historic home on the park, the home outside of which, Lennon was shot and killed in December 1980.

"To tell you the truth, I was always more of a Rolling Stones fan," Kennedy told Mic. "But that said, I always admired John's post-Beatles work. He didn't take a penny, donating all the money from his music to charity, which is the way to go if you have the name and notoriety. Live it, not just say it."

Everyone there was attempting to live that mission for peace Lennon gave the world. Unfortunately, when it came time to snap the ariel photograph and make the final count, the event fell far short of its goal to surpass the current human peace sign world record. That total stands at 5,814 people. Ono gathered about 2,000.

Despite the lack of a record, however, every child there will forever be able to mark the photo as their personal piece of Beatles history. Lennon's message will live on partly through them.