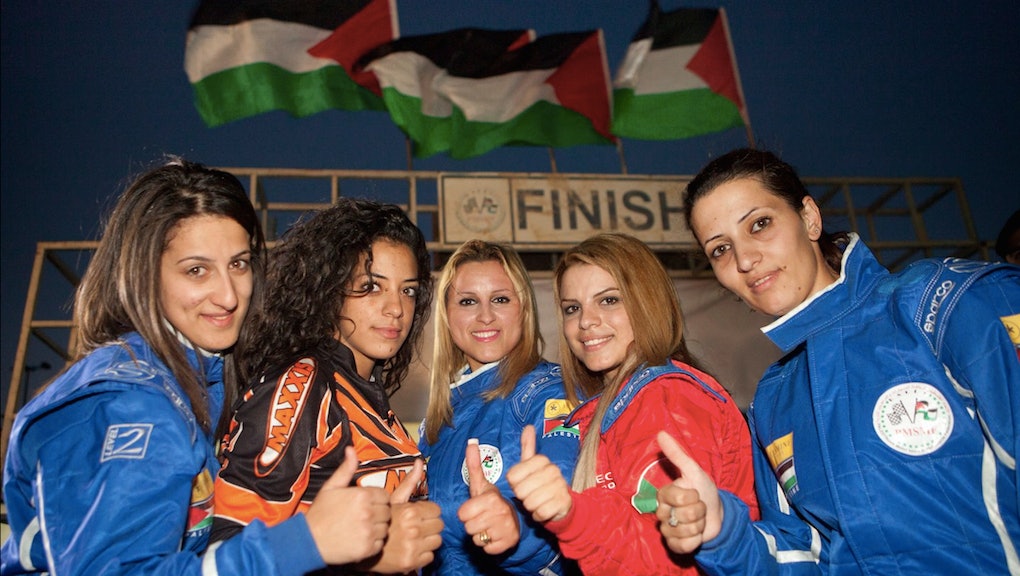 Meet the "Speed Sisters," the First All-Female Racing Team in the Arab World

That theme comes up a lot as the Speed Sisters, a band of five Palestinian women who currently comprise the first all-female race car team in the Arab world, talk. According to the women, the only time they feel free from the fetters of their daily lives is when they're driving or drifting (making the car spin). And fast.

The Speed Sisters formed in 2010 after receiving financial backing from the British Consulate in East Jerusalem. Since then, the team has undergone various permutations of members.

The current Sisters — Mona Ennab, Marah Zahalka, Noor Daoud, Betty Saadeh and Maysoon Jayyusi — have had a number of successes. For example, 25-year-old Noor Daoud became the first Palestinian to compete in an Israeli race when she participated in their Formula 3 competition. She also happened to come in first place.

The challenges the team face are multifarious: logistical, financial and social, to name a few. "It's ironic," one Arab TV commentator said in their eponymous documentary, made by Canadian-Arab filmmaker Amber Fares, which began premiering in film festivals in early 2015 and is planning public releases in 2016. "It's easy to race cars anywhere but Palestine because there are military checkpoints everywhere."

However, these challenges are no match for the team, who have found creative solutions around these logistical hindrances. They have converted airstrips into temporary race courses to practice on weekends and made pop-up racetracks next to Israeli military compounds. The women are occasionally shot at by Israeli soldiers with tear-gas canisters — an incident documented in their film.

Racing is also a costly sport, which has caused the women and their families to make huge sacrifices, precisely because resources there are so limited. Palestinians have faced notable economic hardship under the occupation: The barriers within and between the West Bank and Gaza, in conjunction with air, land and sea blockades, have stymied the economy. The women come from a range of socioeconomic strata, with different backgrounds, meaning certain trade-offs are greater for some Sisters than others.

They cannot afford racecars (to put it in context, one team spent $5.4 million at the Grand Prix in 2013, which is not unusual), so they buy street cars and upgrade them manually (e.g. gutting the interior and changing engine parts) instead. This was made possible for Zahalka, for instance, after the 23-year-old's father opted to purchase her a car instead of land for a family home. "I grew up in a refugee camp and we couldn't even afford food," he said. "I was deprived of everything, but it won't be the same for my kids. Why do I work day and night? It's all for Marah."

For many of them, they've paid a high price personally, too. Not all the drivers' families have been as supportive as Zahalka's, either. Ennab's fiancé left her when she was presented with an ultimatum: him or racing. "So, I chose my races," Ennab said while chuckling, in another short documentary, Meet the Female Drift Racers of Palestine.

The gender biases operate in a larger context, as well. "For a woman — in a very reserved society, instead of just staying home, and getting married, and taking care of their kids — to find time between men and racing and drifting is not really easy," 35-year-old Betty Saadeh said in the same film.

There is also resistance from other male contenders in the racing indutsry. "It's true that, when we first started, people looked at us as though we'd just landed from space," Jayyusi, the oldest team member at 38, who serves as their manager, says in Speed Sisters. "But when they saw us race they changed their minds. Now we have fans, people who encourage us and sponsor us."

The team's objectives have evolved into something that extends beyond competitive success. They have a larger social mission. "I want to change the perception in my society: Cars aren't only for men, we can drive and even race, too," Ennab said.

And, to a certain extent, the Speed Sisters have been effective. Organizations in Palestine have latched onto what they're trying to achieve. "I'm very proud to see our young women today taking an interest in race car driving, and training in order to improve themselves," Khaled Khadoura, head of the Palestinian Motorsport Federation, told NPR in 2010.

There is, of course, the inescapable problem of identity politics in one of the most politically charged regions of the world. Drivers from the West Bank are not able to leave easily, making competing anywhere else in the world extremely difficult and, therefore, limiting the scale on which the team can compete. Daoud, the only driver with an Israeli ID, has received opprobrium from Israelis for competing among them and then again from Palestinians for competing with Israelis. "That's the problem: Everything you want to do involves politics here ... Let's just forget about that and play sports," Daoud told Al Jazeera. "But it's not easy. Being a racer in Palestine is political. Being a woman ... here, that is political as well."

The obstacles and concomitant sacrifices haven't been easy on the team. "There is a revolution building inside of me; I've had enough," Jayyusi said. "I'm doing everything to keep everyone around me happy — it's exhausting me."

Yet, as soon as the women are behind the wheel, they reclaim that freedom, assuaging any number of hardships. "When I enter this beautiful, motor-sports car — 600 horsepower — I feel like the happiest girl in the world," Daoud said. "Of course, it's also hard in Palestine, because we're under occupation ... it's not easy to live in Palestine ... [But] racing helps a lot, to get the frustration out."

The women have a growing fanbase, with thousands of followers on Facebook and Twitter, and are frequently approached by supporters — little girls, in particular. Daoud has dreams of one day opening a driving academy in Palestine, as part of their efforts to push back against the gendered restrictions imposed on them.

"I think, we — the Speed Sisters — we changed the picture of Palestinian women," Saadeh said. "Do you want to come to the next race and watch me?" she can be seen asking her nail technician during a manicure, at the end of their mini-documentary.

"No. I want to race with you, actually," the technician responds.