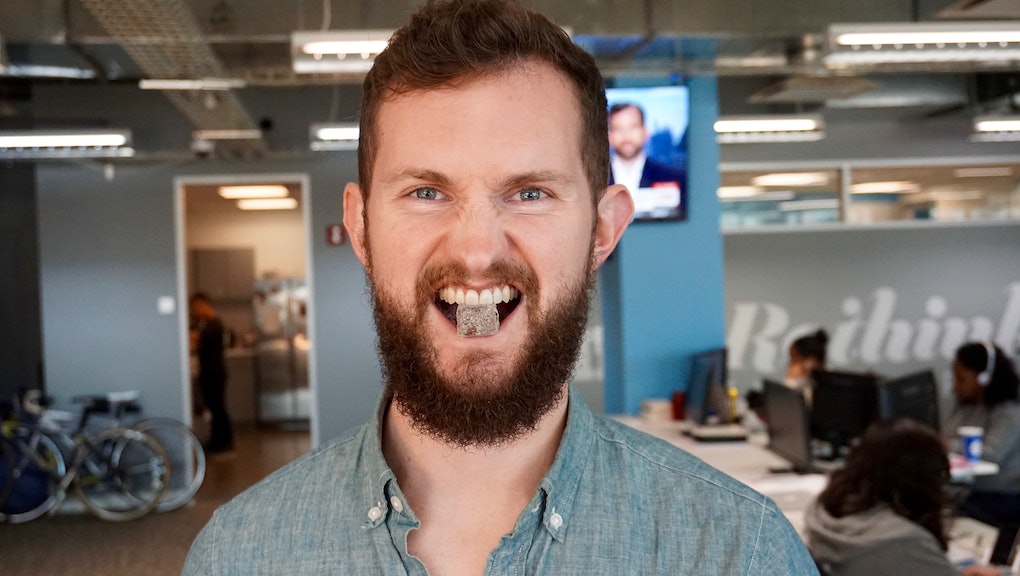 As I type this sentence, I'm chewing on half a cup of cold-brew coffee gelatinized into a gummy cube. I've been chewing them in lieu of a morning iced coffee for two days. My focus is up. My bathroom breaks are down. My dad jokes are on point, which is probably (but not necessarily) due to the 100mg of caffeine coursing through my veins.

If all of those qualities sound good, gummy coffee might be worth a shot.

Go Cubes, which are currently just a project on Indiegogo, are being marketed as chewable coffee by a San Francisco-based company called Nootrobox — but there's a lot more going on here.

First, Nootrobox experienced some notoriety after successfully funding a product called Sprint, which combines caffeine with L-Theanine, an ingredient in green tea thought to cut the jitters of caffeine. Basically, it offers a lot of focused, ass-in-chair energy without the "instead of writing I'm going to arrange my books chronologically by author's spouse's birthday" effect.

I've tried Sprint before. It's a nootropic, or a supplement designed to help mental function. (Coffee is also considered a nootropic.) Sprint offers more caffeine than a cup of coffee but without the jitters. According to Geoff Woo, one of the co-founders of Nootrobox, Sprint is meant to be used for specific scenarios, like a term paper or a hard bout at the gym, and not for daily consumption, like a daily vitamin.

"I'm personally pretty bursty with Sprint," Woo told Mic. "Sometimes [I take it] every day for a week and sometimes [I don't use] it at all."

Go Cubes are actually made with the same ingredients as Sprint. The difference is, they actually taste like coffee and they're more pleasant to consume — Sprint comes in white powder to be swallowed in gel caps.

"From a consumer perspective, capped pills are scary," Woo told Mic. "Even though they're the most efficient way to get the active ingredients into your system, they're intimidating. After seeing how gummy vitamins are a huge phenomenon, we thought getting nootropics to be used in the mainstream would need something that tastes good."

So what's it like to actually eat a Go Cube?

We found out. Each cube contains 50mg of caffeine, or the equivalent of about half a cup of coffee. (The package suggests a serving size of two cubes.) The Go Cube is also hard to chew and swallow all at once, which means you might be taking bites out of what looks like a big brown marshmallow for a couple minutes and leaving your co-workers scratching their heads.

The outside of the cube tastes like coffee candy. It's savory. It satisfies the coffee flavor you associate with getting in the zone to do work. But the gelatinous inside, where all the ingredients live, doesn't feel like a brilliant Willy Wonka concoction that replicates precisely the experience of drinking a latte.

And that's where Go Cubes hit a hurdle. All the ingredients in the Go Cube — caffeine, L-Theanine and all the different B vitamins — taste like shit in their original state, which is why you usually take them as a pill or already diluted in milk and sugar. With Go Cubes, it's hard not to taste all the supplements.

Woo compared the flavor of Go Cubes to how Red Bull was described almost three decades ago. At first, it was widely regarded as tasting terrible, more bitter and intense than a soft drink. Now, though, the flavor's been assimilated: When you buy a Red Bull, you accept its flavor for its effects. "[Go Cubes are] distinctive, funky," Woo told Mic. "We want to stay true to the health angle, but it still has to taste good and be interesting to people."

Many people drink coffee for the ritual — it's how you start your day. But you're getting more out of these cubes than just the rush of caffeine.

The combination of L-Theanine and caffeine is a basic tenet of the nootropics scene: It keeps you energized and focused without some of the negative effects, like not being able to sit still and having to run to the bathroom in the middle of a meeting. The Go Cube compound also includes Inositol, which is a chemical found to help ease panic attacks and anxiety.

The drawbacks: Thanks to the extra focus, I felt especially irate when someone would interrupt my work or otherwise disrupt the flow I'd achieved on a long project that required all my concentration — so Go Cubes might not be the best idea if you've got distractions (like small children or interns) around you and lack noise-cancelling headphones. In addition, the extra B vitamins can make you really hungry, so keep snacks and water handy.

If I switched to Go Cubes, I'd miss the ritual of starting the day with a cup of coffee. That said, I wouldn't miss that feeling after my first cup, when I'm too jacked up to sit down and focus. If coffee is doing a number on your body and you're on the hunt for an alternative, it might be time to embrace change. Gelatinous, cubic change.