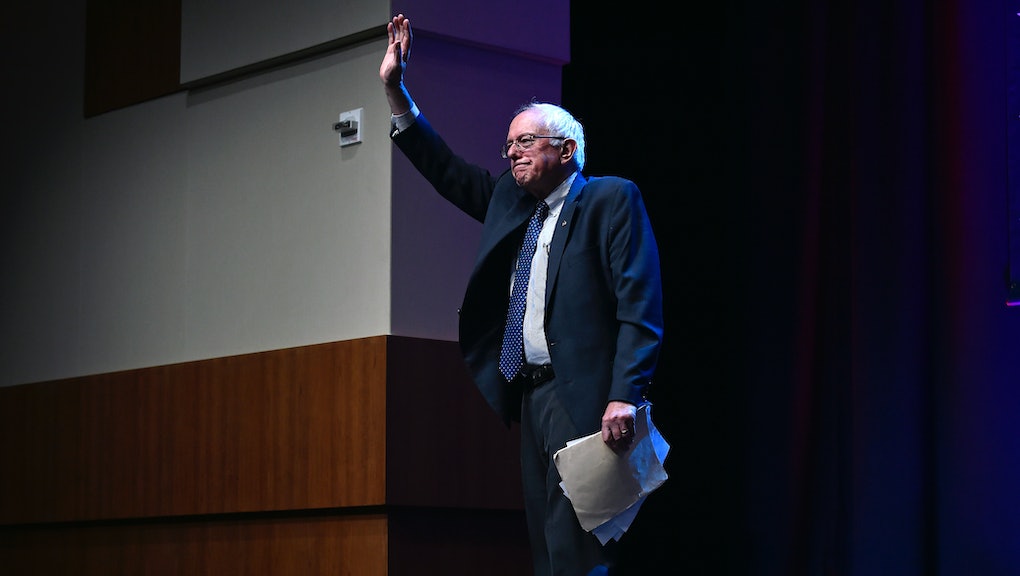 How Bernie Sanders Is Planning to Win Over Latino Voters

As their candidate continues to climb in the polls and cut into Hillary Clinton's fundraising advantage, the team behind Sen. Bernie Sanders' (I-Vt.) insurgent primary run has begun the more nuanced work of plotting a path to the Democratic nomination.

In South Carolina, Sanders is working double-time to build a rapport with a church-going black community that enjoys longstanding ties to the Clinton family. He is also playing from behind with Latino voters, who know and like Clinton, but haven't yet formed a reliable opinion on her leading Democratic opponent.

For Sanders, this presents both a daunting challenge and unique opportunity.

Perhaps more so than any other primary candidate in either party, Sanders is free to introduce himself on his own terms to the fast-growing and increasingly powerful Latino electorate, which has seen its influence grow from more traditional enclaves in Nevada and California to new frontiers in Iowa and Virginia, according to the campaign's new director of Latino outreach, Arturo Carmona.

Though the initiative is new, the strategy is familiar. As Carmona told Mic on Tuesday, the effort will go "bottom up" with state and regional programs recruiting volunteer leaders and tapping into the power of social media to spread the word. The campaign believes, he said, that once Sanders' full economic message penetrates these constituencies, "people are not only embracing his agenda but they're getting activated in a very important way."

Building a team: The public strategy has begun to emerge over the past week. On Thursday, Sanders announced the hiring of Carmona, who had been working as the executive director of the Latino advocacy group Presente.org. The respected Los Angeles-based activist and organizer will also serve as Sanders' political director in the Southwest.

The decision to link up with Sanders was an easy one, Carmona told Mic on Tuesday night, despite the fact that the 37-year-old had sworn to himself he'd never work for another "direct campaign" after he left work as an aide in the California state legislature.

"I saw a historic opportunity to really elevate a particular progressive agenda that can advance the interests of Latino and working-class families from across the country," he said. "So when the campaign reached out to me, I really thought about it and accepted it because I though it could advance and propel the work that I was doing [at Presente.org], but at a much larger scale."

Rep. Raul Grijalva, an Arizona Democrat, is the only federally elected official to publicly back Sanders, a former House colleague. The announcement arrived just hours before Sanders was scheduled to address the Congressional Hispanic Caucus Institute, an influential organization created in 1978 by leading Hispanic officials on Capitol Hill.

But Carmona is charged with much more than whipping up support among strategically cautious lawmakers. He is focused on building an organization that can introduce Sanders to a community that most polls suggest does not know much about him. A recent survey by Noticias Univisión found that nearly 70% of Latino voters did not know or had not yet formed an opinion about Sanders.

In the past week, Sanders has matched Clinton's promise of going "even further" than President Barack Obama has using executive actions to protect undocumented immigrants from potential deportation. A Washington Post report said Sanders told Democratic lawmakers on Thursday he would consider extending access to the Affordable Care Act insurance exchanges, allowing undocumented immigrants to benefit from lower rates provided they paid with their own money.

The right message? The attention to health care issues is a wise one, Mark Lopez, director of Hispanic research at the Pew Research Center, told Mic on Wednesday. Health care, along with jobs and education, are the three most pressing concerns within the community, according to his research.

Lopez believes Sanders has the right message to attract new attention in the Latino community.

"All of these economic issues and education issues are things that are at the forefront of the minds of many Latinos," he said. "In many respects, much of Sanders' policy positions match closely or follow closely with what Latinos themselves are concerned about."

In particular, there is the heavy toll the 2008 Wall Street meltdown took on Latino families, especially those caught up in a housing bubble gone bust.

"Their net worth fell 66%," Lopez said. "Certainly in terms of wealth, Latinos took the biggest hit in terms of the recession."

This is an argument Carmona makes with added vigor.

The 2008 crash, he said, "shattered the Latino community. When you look at jobs, at student debt, at all the core issues that the senator is addressing, there's no community that will be more affected."

Now it's up to Sanders to convince those voters, especially the heavy majority for whom he is a relative mystery, that he understands — and more importantly, that he has a plan.