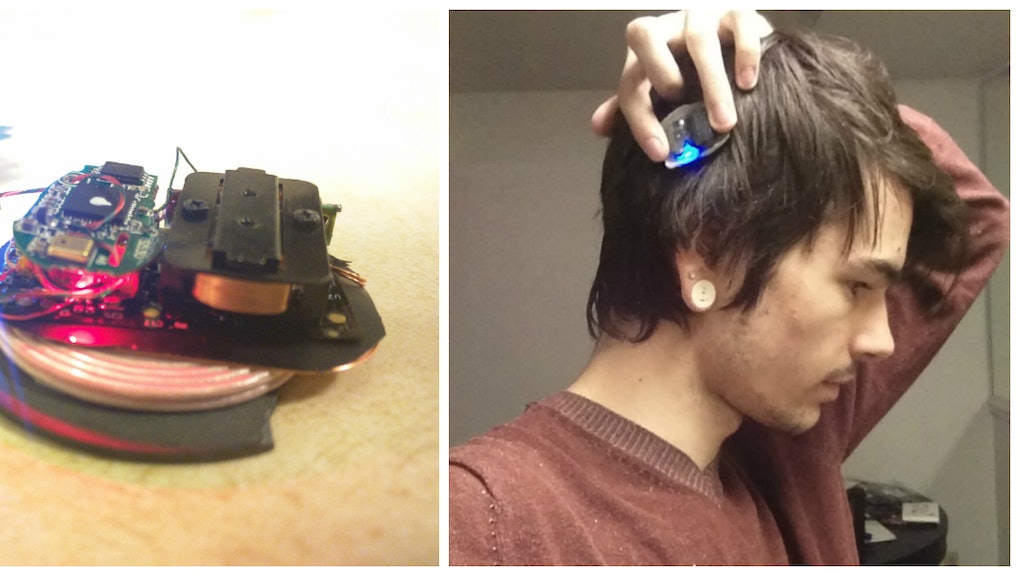 The Phone of the Future Will Be Implanted in Your Head

Ben Engel, 20, hopes to fly to California in a few weeks to have a Bluetooth headset installed under the skin. The device will be placed four inches behind his ear, and the sound from the speaker will vibrate his skull so he can hear calls through his head. Ditto for the microphone. Using magnetic implants in his fingers, he'll trigger the "answer call" button.

The future of mobile phones is in your face. Actually, more precisely, it's sitting on Engel's kitchen table in the form of a prototype that receives phone calls and can be switched on via magnets already in his fingers. Using bone conduction technology this way — implanting electronics in the head to control phones and other hardware — isn't a new idea. But existing models are projected to be, at the earliest, five, maybe 10 years out. Computer chips implanted in the brain require a level of sophistication and tiny size not ready to be rolled out en masse just yet. But there's no reason they have to be — as long as you're willing to go through more extreme methods to implant them.

Engel isn't waiting for a futuristic brain chip. What he needs is an electronic coating that won't let his head-embedded phone rust and infect. The coating he has now is too stiff, he told Mic. "It doesn't allow for any movement inside the transducer, so in short I have no sound. I'm trying to find a new more rubbery kind of coating." Every day, there's something else to tweak.

This isn't a new concept.

Hearing aids, like those from the company Baha, have been using the bone conduction for over 35 years to send sound directly to the inner ear through the skull. Another headset, called Cynaps, is embedded in a baseball cap. More recently, a product design company called Studio Banana Things used Kickstarter to fund Batband, a high-fidelity, Bluetooth-enabled bone-conduction headset.

"Besides protecting your eardrum by not blasting sound into your ear canal, it has been medically demonstrated that normal frequency bone conduction causes no harm to health," Key Kawamura, founder of Studio Banana Things, told Mic.

But here's the rub: The Batband looks like something from Star Trek: It's a big gray horseshoe that wraps around your head. Like the early Google Glass models, its functions are extremely futuristic, but it's still, in a word, geeky, too cumbersome for mass-market adoption. But what if you could have all of that technology as a small implant roughly the size of a quarter, installed under the skin behind your ear, where you'd never notice it? And what if it could pick up any signal you needed, from an Android phone, iPhone or tablet?

With that in mind, Engel is on the cusp of the future of communication technology. He's on the literal cutting edge between hardware and what you might call wetware — implantable biotechnology.

What does it take to put a phone in your head?

Don't put a phone in your head — that's the wrong question. Any actual phone is going to be a piece of paperweight garbage in a year or two. Instead, rethink what a phone can be.

Instead of an iPhone in your body, what you want is an interface, probably Bluetooth-enabled, as that technology doesn't seem to be going anywhere. You want something that can provide and receive sounds and can also work as a third-party device to connect to your current smartphone.

And that's where Engel is starting.

Tibbetts' rig looks more like an operating room than a typical body-mod studio, though. It has overhead lights like an operating room and an adjustable, electronic chair like you'd find in a dentist's office. The one thing he doesn't have is an on-site anesthesiologist, which is a real shame when you consider what it takes to implant a Bluetooth headset — even one as bare-bones as Engel's — under the skin on your head.

With brain-computer interfacing, "you'd have the ability to interact directly through the nervous system," Tibbetts said.

"We're going to use a skin retractor," Tibbetts says, referring to the surgical implement that looks like a compact steel garden rake. "After making your incision, you have to get in there and break up the fascia to give yourself space, since you need more excess skin to tent up."

Tibbetts has experimented with implanting magnets in the cranial area he's talking about. But those were small, not much worse or more invasive than a splinter or a shard of broken glass. A procedure involving actual electronics takes more consideration.

First, the transducer, the piece of the headset that vibrates, needs room to move, meaning whatever coating Engel uses — Tibbetts says it should have a glass-like polish on it to reduce the risk of infection — should also have a little air pocket for movement. The coating needs to be flexible, more so than Engel's current coating is, since it's made for dental applications. And unlike magnets, the battery-equipped headset probably can't be cleaned in an autoclave, the pressurized steam chamber used to sterilize lab equipment and tattoo needles, because it's unlikely the electronics will survive.

That's all to say there are still hurdles.

"Ideally, you'd have the ability to interact directly through the nervous system," Tibbetts told Mic. "Using brain-computer interfacing, that's your end goal. But it's not something we can do now."

Maybe it's not in Tibbetts' studio, at least not yet. But elsewhere in the country, experiments using brain-computer interfacing are already active.

The future of brain-computer interfacing

The study followed two patients who were able to control a computer cursor by willing it to move with their brains — something much more precise than an early experiment that used a robotic arm to drink a beer. The recent tests involved moving the cursor over objects on a screen and typing, using thoughts alone, at a speed of six words per minute.

Right now, Engel only thinks of making and receiving calls as a bonus to the big goal, which is to use the headset to receive data from the Internet as compressed audio waves. Hopefully, his brain will be able to translate those waves into their true meaning, interpreting the mood of the Internet in real time.

"I will know if people on Twitter are happy or sad," he told Mic. "I will be able to tell large political events before they even happen, just based on how millions of people are acting that given second of the day."

His plans probably won't be the status quo for anyone other than other citizen scientists or a few hardcore stockbrokers. But he might be the key to breaking into the future of mobile technology: A smartphone interface that you always have on you, because it works like a cochlear implant, could be used to let hearing-impaired users hear phone calls. And unlike current available medical technology, it will actually be cheap — especially compared to the estimated $40,000 price tag on today's cochlear implants.

The best part: We might start seeing this soon — as long as Engel can figure out that damn coating.

"The idea he came up with is pretty advanced," Tibbetts told Mic. "But he's cannibalizing other devices instead of building it from the ground up, which is pretty cool because whereas a lot of people will work on projects for years, Ben was like a month out and said, 'All right, I'm ready. What do I do next?'"