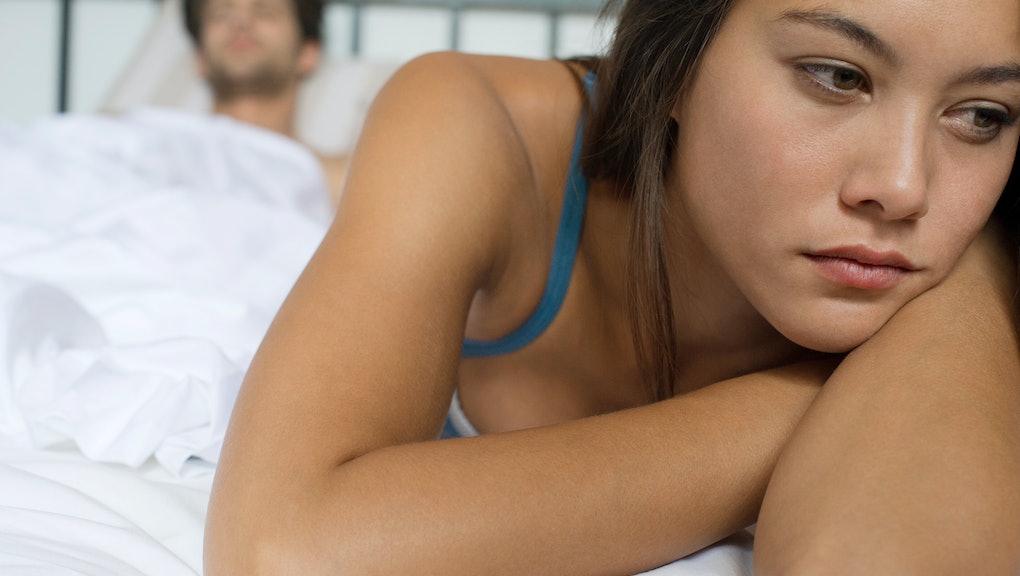 I'm a sexual assault survivor, and I was diagnosed with post-traumatic stress disorder earlier this year. Because I'm open about my experience and have written about it for various websites, most of my partners date me with the knowledge that I have preexisting mental health issues. Most of them have been understanding. Some of them haven't. "This is a lot to deal with," one partner said when he found out. Which I suppose, to some extent, it is.

The first month of a new relationship is often a heady blend of orgasms, dopamine and trying to keep your embarrassing quirks under wraps. It's the time of black lace lingerie before the period-stained, polka-dotted cotton panties come out, the time where you talk about your punk band from high school but not your membership in the Dungeons and Dragons club. But keeping secrets from a new partner is all the more difficult if you have a mental illness.

A necessary conversation: According to 2014 statistics, nearly 1 in 5 Americans has a mental illness, ranging from schizophrenia to garden-variety depression. But that doesn't make disclosing your mental health status to someone you've just starting seeing any less awkward or difficult.

Sometimes, people in relationships will disclose it out of necessity, particularly if their symptoms are noticeable. For me, at some points during sex, I would have flashbacks to my assault, a symptom of my PTSD. I needed to explain to my partners that my abrupt lack of interest in sex was not because I wasn't interested in them, but because it was part of my healing process, and I needed their patience.

Chris*, 28, also says he discloses his mental illness to potential partners right off the bat. Five years ago, Chris was diagnosed with bipolar disorder, which affects 3 to 5 percent of the population. The symptoms of bipolar disorder include impulsive behavior and rapid mood swings, all of which may manifest themselves in a relationship, which is why he felt he had to come clean with his partners.

"I've hit points in my life where I am very difficult to handle, to be around," he told Mic. "If I were to not come clean with somebody and be like, 'Look, I suffer from bipolar,' then if I hit a manic episode they'd be like, 'What the fuck. I cannot handle this shit.' That would help them understand what you're going through in a depression, [or else] they might think that it's their fault or something."

Alexis*, 28, learned the value of full disclosure firsthand after she was diagnosed with panic disorder, a form of anxiety that affects approximately 1 out of 75 people. Three months ago, she started seeing her new boyfriend and grappled with whether she should reveal her diagnosis to him. "He didn't have a lot of experience with anxiety or anything like that, so I kind of had to break the news gently," she told Mic.

While Alexis' anxiety is manageable with therapy and medication, she was still nervous to tell her new boyfriend. "I was a little bit nervous, only because that stigma does exist: 'Oh, panic disorder, is this person a loose cannon?'" she told Mic. "I was nervous about telling him, and then once I started telling him I'm so glad that I did. He was like, 'I'm really glad that you told me. I would have wanted to know so I can help you out.'"

A tricky balance: Some people might be hesitant to disclose their mental health statuses to their partners, viewing it as none of their business. But experts say if you have a mental illness, the question is not if, but when to divulge it to your partner.

"I'm a big believer in not keeping secrets," Barbara Greenberg, a clinical psychologist, told Mic. "You can't get through life with secrets in relationships because then you're starting off on the wrong foot, because all secrets breathe in life is anxiety. You find any family where there's sort of a chronic level of anxiety, it's often because there's secrets and people aren't being honest with each other."

That said, it's important to figure out the right time for you to tell your partner. "[On dates] I don't think that should be your starting line," Chris told Mic. And when you do figure out the right time to tell them, wording is key. "You don't say, 'I am bipolar.' You say 'I have bipolar,' or 'I suffer from the disease of bipolar.' To analogize it, if you're out on a date with someone, your opening line is not going to be like, 'I have cancer,'" he said.

The right place, the right time: So how do you know when it's appropriate to reveal a diagnosis in a relationship? Greenberg says whenever the relationship has matured to the point where it feels comfortable — usually, around the three-month mark. "Let the person know how it impacts your life and educate them," she advised. "And then you can see if they really want to stay in the game with you and help you. Maybe it will make it easier for them to open up about things too."

If your relationship is strong, your partner's reaction might pleasantly surprise you. Last year, for instance, Chelsea*, 27, was diagnosed with borderline personality disorder, a condition that affects an estimated 2% of the population. As she was already in a romantic relationship, she told her partner right away. "He reacted in a way that I couldn't ask for to be better," Chelsea said. "He did not know what it was, and thus immediately looked it up for a cheat sheet of symptoms."

As Chelsea and her boyfriend learned about the diagnosis together, they found it helped explain some problems they'd been having in their relationship. It's common for those with BPD to experience great difficulty with relationships, as they tend to push away from their partners in response to perceived feelings of abandonment. Chelsea found that explained many of the fights she'd been having with her boyfriend. "The diagnosis ... helped explain why and how certain things occurred [in our relationship]," she said.

That said, when disclosing a mental illness, it's best to brace yourself for the possibility that some might not react as well as Chelsea's boyfriend did. In my case, when I revealed my PTSD to potential partners, some would say they understood, and I believed them. But when what I was going through directly affected our sex life — for instance, if I had a flashback and was disinterested in sex — their frustration often trumped their compassion, even though usually all I needed was some time and healing.

But if a partner reacts poorly to your mental health diagnosis, ultimately, that might be the best-case scenario — for you and for the relationship. "If this person can't tolerate a mental illness that you are getting help for, then that's probably not somebody you want to develop a life with anyway," Greenberg said. And ultimately, they'll be setting you free to meet someone who, when you explain your issues to them, looks you in the eye with love and understanding and replies, "I understand. Thank you for telling me. I love you."