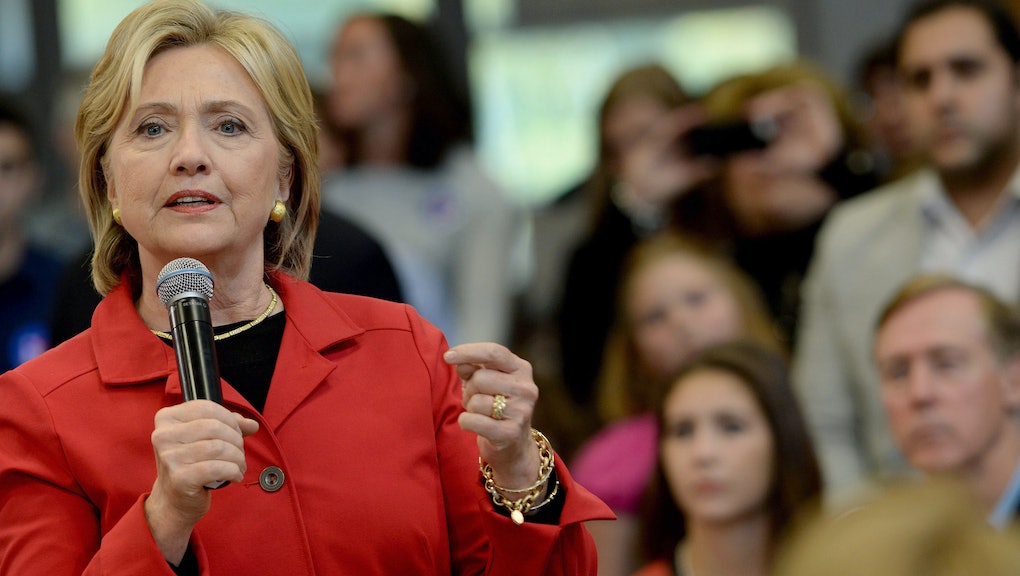 Hillary Clinton's once-rapturous support of President Barack Obama's 12-nation Trans-Pacific Partnership trade deal is officially a casualty of the Democratic primary season. The former secretary of state said Wednesday she could not support the pending agreement, which has drawn strong criticism from liberal Democrats and organized labor.

"As of today, I am not in favor of what I have learned about it," Clinton told PBS' Newshour, citing concerns the pact would drive down domestic wages while failing to create new jobs or bolster national security. "We don't yet have all the details, I don't believe it is going to meet the high bar I have set."

In a statement released later Wednesday, Clinton faulted Republicans for creating an environment that "weakened U.S. competitiveness and made it harder for Americans who lose jobs and pay because of trade to get back on their feet." Their actions, she said, had forced the U.S. to go "into this with one arm tied behind our backs."

Change of heart: The announcement marks a sharp departure from Clinton's previous remarks on the controversial deal, which Clinton helped shepherd along during her time as secretary of state from 2009 to 2013.

During a visit to Australia in 2012, she called an early draft of the TPP deal "the gold standard in trade agreements." A year earlier, she declared it to be "one of our great projects in this century." CNN compiled an additional 43 instances of Clinton speaking out in favor of the deal.

Sen. Bernie Sanders (I-Vt.) and former Maryland Gov. Martin O'Malley, meanwhile, have been vocal opponents from early in the process, with Sanders calling the pact "disastrous" and a triumph for Wall Street.

"Wow! That's a reversal!" crowed O'Malley, a Clinton ally until this campaign season, in a statement in response to Clinton's comments. "Secretary Clinton can justify her own reversal of opinion on this, but I didn't have one opinion eight months ago and switch that opinion on the eve of debates." The candidates will meet to discuss the issue further on Oct. 13 in Las Vegas. during the first Democratic debate of the primary season.

Clinton has now placed herself at odds with the Obama administration on three major policy debates in a single week, first on the question of whether to impose a "no-fly zone" in Syria, then on the prospects of tightening gun restrictions through executive action. In both cases, Clinton said she would act where Obama has not.

Vice President Joe Biden, who as part of the administration has worked hard to sell the deal to skeptical labor leaders, is headlining the "Worker Voice" summit at the White House today. According to a pool report, he arrived late to deliver remarks to an audience including AFL-CIO president Richard Trumka after getting held up in discussion with  Obama — "a foreign policy matter in the Oval," he explained.