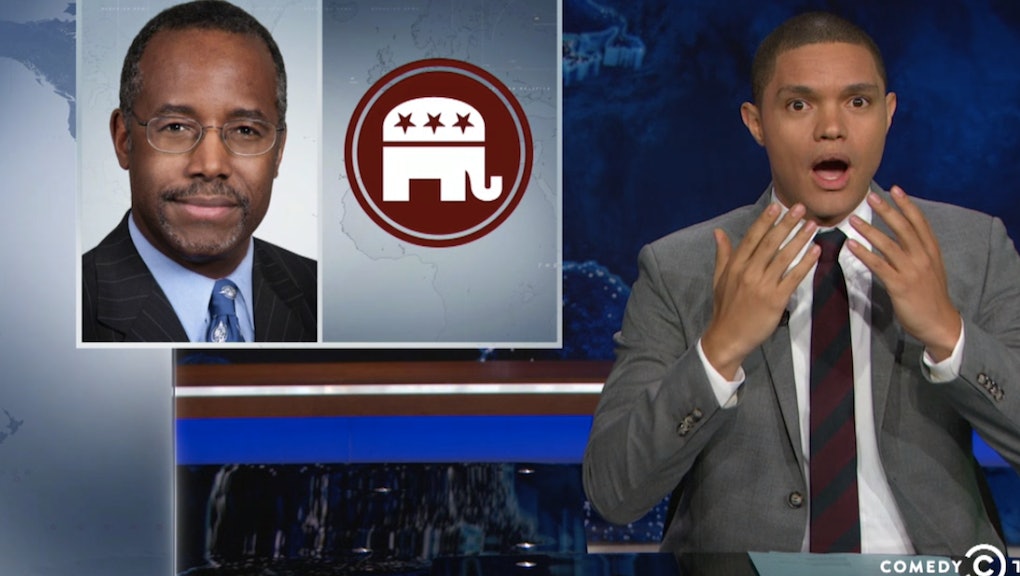 Gun violence is no laughing matter. Unless you're Ben Carson, that is.

On multiple occasions since the tragedy, the Republican presidential candidate has criticized the victims of the Oregon Umpqua Community College shooting for not having done more. The sentiment was followed by an endearing chuckle.

"I would not just stand there and let him shoot me," Carson told Fox News on Tuesday of the shooter. "I would say, 'Hey, guys. Everybody attack him — he may shoot me, but he can't get us all.'"

"You know what I also don't get?" Daily Show host Trevor Noah mused after playing the Carson clip. "Is that Ben Carson really thinks that he could rally people against a mass shooter. I think he's overestimating how inspiring his presence might be."

Noah provided Carson with the benefit of the doubt, given how seemingly incomprehensible the doctor's insensitivity was: "In Carson's defense, though, he may have been caught off guard. Given time to think, I'm sure he'd clarify what he meant."

"What needs clarification?" Carson asked a reporter after making the initial comments. The reporter says the implications of Carson's statement is that the students were in part to blame for their own deaths.

"No, I just said nothing about them, I said what I would do," Carson said. "I would ask everybody to attack the gunman, because he can only shoot one of us at a time — that way we don't all wind up dead." Followed by another jolly chuckle.

For a third time, the good doctor was given another opportunity to "clarify" his remarks during an appearance on Megyn Kelly's The Kelly File. "The accusation there, Dr. Carson, is that you appear tone deaf and that you seemed callous in the laughter about a massacre and what you would have done," Kelly said to her guest.

"No, I'm laughing at them [the people asking the question] and their silliness ... If you sit there and let him shoot you, one by one, you're all going to be dead."

"'Let him shoot you'?" Noah quotes Carson in disbelief. "What do you really expect the victims to do?"

And it gets better. During an appearance on The View, Carson said the best way to protect small children like those who were murdered during the Sandy Hook shooting is not to tighten gun control, but to arm kindergarten teachers with guns and train them. "I want that teacher trained in diversionary tactics," he said.

Perhaps the pinnacle of his whistle-stop tour through gaffe-ville came while he was responding to questions on Facebook. In response to an inquiry on how to mitigate gun violence, Carson said the following:

"There is no doubt that this senseless violence is breathtaking — but I never saw a body with bullet holes that was more devastating than taking the right to arm ourselves away."

In the wake of the Oregon shooting, a near-regular occurrence in the United States of late, President Barack Obama appealed to the public to take on the issue of gun control, once and for all.

"The reporting is routine, my response here at this podium is routine, the conversation in the aftermath of it — we've become numb to this," Obama said. "What's also routine is that somebody somewhere will say, 'Obama politicized this issue.' Well, this is something we should politicize. It is relevant to our common life together."

So, as for the argument that the bullet-riddled, dead body of an innocent victim is not as egregious as taking away the right to own guns, Noah might have put it best. It's "batshit crazy."