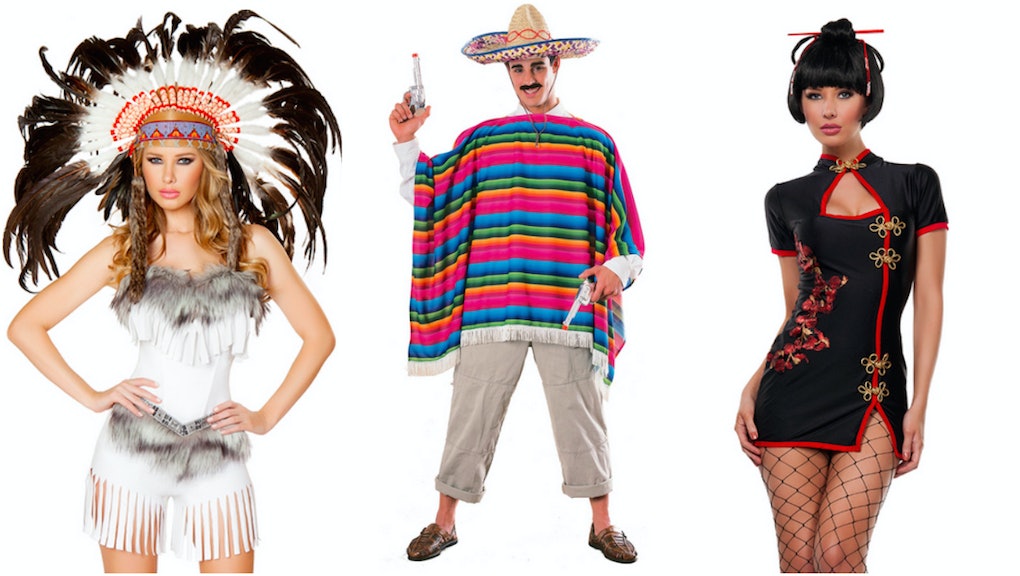 Halloween is conventionally a kids' holiday in the United States, full of trick-or-treating, pumpkins and family friendly activities. But it also became the one day a year when adults had the excuse to dress up — which means there are bound to be some inappropriate, offensive and questionably racist outfits in the mix.

Cultural appropriation is already a problem in fashion and culture at large. However, with the goal of nailing the perfect costume, Halloween may be the most visible day when people find it OK to play around with cultural symbols, icons — or even skin colors — that aren't their own.

That often veers into a place of mockery or cultural appropriation, when a privileged community mines the traditions of marginalized peoples without permission or regard for the consequences such "borrowing" may have. (In case you need a quick primer, see here, here and here.)

In some cases, people may say they're trying to "appreciate" another culture or just really love the style. But the last thing you want to do is to treat another culture like a costume. If you truly appreciate something, you don't play it up for kicks just one day each year.

Instead of digging into the most well-worn stereotypes this Halloween, here's a friendly guide to appreciating a culture's style without wearing it as a costume. The best part? These tips work all-year round.

1. Instead of playing "Indian," why not shop from actual Native American designers?

Native Americans have a long, complicated history of displacement and forced assimilation in the United States, and many communities face continued marginalization. All the while, from headdresses to fringes, "playing Indian" by dressing up in stereotypical Native American styles has become an American tradition. There are in fact 562 Native American Nations, each with their own unique history and customs. Yet the stereotypical outfits persist, including on the fashion and retail level today, to the detriment of Native American designers and artisans.

Instead, appreciate it: If Native American style or fashion interests you, why not learn more about it and support it financially? There are plenty of Native American designers reviving traditions from their communities with a modern twist. Blogs like Beyond Buckskin regularly curate a selection of contemporary designers, like Bethany Yellowtail and Nanibaa Beck, who are doing just that.

2. Instead of dressing up like a sexy geisha, explore actual Asian beauty on today's biggest beauty blogs.

The concept of Eastern culture as "exotic" is rooted in Orientalism, a concept dating back to the era of colonialism in which Western cultures viewed Eastern cultures as foreign, exotic or primitive. In the U.S., that stereotype has been applied broadly to "Asians" of different nationalities, often resulting in discrimination of Chinese immigrants during the turn of the 20th century and Japanese-Americans during World War II, for example. Asians have also often been depicted in Hollywood under broad strokes, further perpetuating stereotypes.

Instead, appreciate it: Geisha-inspired costumes are often most identifiable by the pale geisha makeup. The world of beauty and makeup in Asia, though, is so much more diverse, with plenty of trends that have made their way to the U.S. South Korea's makeup products are just one awesome way to explore Asian beauty innovations with products that are having a moment, including BB creams, sheet masks and cushion compacts.

3. Instead of channeling "Mexicans" with ponchos and sexy Latina caricatures, tune into Latin American TV to see what Mexican culture is actually about.

The image of a Mexican dressed in a poncho, wearing a sombrero and sporting a mustache is rooted in racist caricatures that go back decades to the Bracero program, in which more than 4 million Mexican farm laborers worked the fields in the U.S.; many were later "repatriated" to Mexico. Hollywood films also played up stereotypes of Mexicans and Latinos by including one-dimensional characters like the saucy Latina lover or the dirty, shirtless bandit — types that are often seen in reductive Halloween costumes.

Instead, appreciate it: Mexican culture is immensely diverse; it is, after all, the second most-populated Latin American nation. For a glimpse of that diversity in style and music, just look at the award categories in the Latin Grammys or the Spanish-language awards Premio Lo Nuestro — there are countless ways that Latinos look and sound, that have nothing to do with a poncho-wearing mariachi bands.

4. Instead of wearing "Arab" costumes that stereotype Muslims, check out real, gorgeous Muslim style from the blogger world.

In the post-Sept. 11 world, Muslim Americans faced discrimination from the general public due to the acts of religious extremists. Plenty of Muslim stereotypes play on links to extremism, from "terrorist" costumes and assumptions of what religious people look like.

Instead, appreciate it: For one, "Arab" and "Muslim" aren't synonymous, nor does every woman wear a hijab or every man have a long beard. If they do, what that looks like varies depending on a number of factors, including a country's local practices. But there is an amazingly vibrant world of Muslim fashion online, including young female fashionistas bringing their personal style to blogs, as well as Sikh fashion bloggers like Pardeep Singh Bahra of the blog Singh Street Style.

5. Instead of looking like a fortune-teller gypsy, check out the vibrant style of flamenco with its gypsy heritage.

The term "gypsy" is a label associated with the Romani people, a population that has been displaced and persecuted for centuries in Europe since emigrating from India. Stereotypes surrounding gypsies, including that they are fortune-tellers and thieves, still persist today, exacerbated by the fact that gypsy culture is somewhat secretive (a byproduct of being chased out from differing countries and wanting to preserve their culture). In the U.S., the stereotype of American gypsies as thieves was so prevalent that a New Jersey law in the 1980s placed stricter burdens on gypsies opening fortune-telling businesses, according to TLC.

Instead, appreciate it: Gypsy culture is hard to define beyond a single geography, but flamenco is commonly thought to have origins in Spanish gypsy culture. Many contemporary musicians and dancers have continued the tradition of flamenco, including the music and the outfits. Exploring flamenco's style and music can be a better way to actually appreciate what gypsy heritage includes.

6. Instead of dressing as a sexy Bollywood dancer, watch actual Bollywood films to understand what they're all about.

Wearing saris and other fantasy versions of typical South Asian dresses can quickly veer into territory of cultural ignorance. Saris are only worn in certain regions, and there are plenty of other South Asian dress styles that are just as stunning. Unfortunately, on Halloween, sexy versions of traditional South Asian attire only helps further a stereotype of women as "exotic" and seductive beings.

Instead, appreciate it: If a Halloween costume takes its cues from the often lavish theatrical dresses popular in Bollywood films, then why not watch the same films that inspired it? There are many classics to choose from that can jump start the imagination and provide an entryway into another culture.

Just don't do it. Ever. It's pretty well documented that painting one's face to mimic someone who is black has a clearly racist history. Other stereotypes about African Americans, like big butts and big lips, are also almost always offensively reductive and mired in painful history.

Instead, appreciate it: African and black culture, like every other culture on this list, is rich, vast and diverse — just taking a look at the world of style and fashion alone illuminates this. There are blogs like Afrobella, which have for years championed natural hair and beauty, or longstanding magazines like Ebony and Essence. Newer style publications like Hannah are also popping up, aiming to spotlight how diverse and beautiful black culture and black women's style really can be.

Relating to and appreciating culture, any culture, is best done by first speaking with people who are closest to it and whose lives, experiences, practices and creations form the foundation for that world.