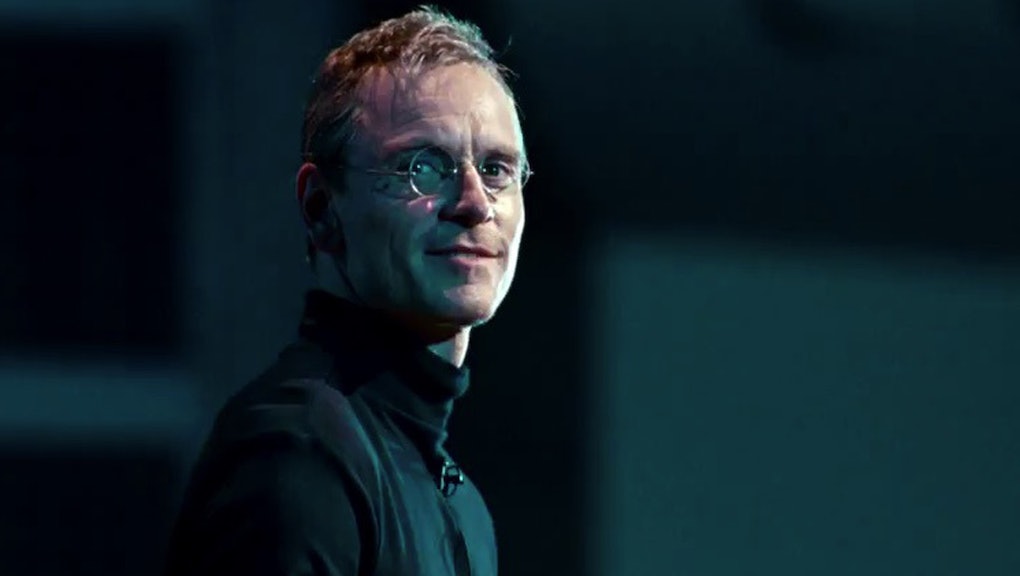 With 'Steve Jobs,' Aaron Sorkin Got Stuck in the Reality Distortion Field

By almost every count, Steve Jobs is a fine movie. The dialogue is snappy and smart. The structure, set up around three product launches in 1984, 1988 and 1998, is creative. The ensemble is uniformly brilliant, led by Michael Fassbender as the man himself. Danny Boyle's direction is sharp: His sense of wonder and scope works here to make the launch of now-dated technology look awe-inspiring.

So why does Steve Jobs miss the mark? How is the whole so much less than the sum of its parts?

The problem lies in Aaron Sorkin's script. Like Jobs, Sorkin has a tendency to bend reality to fit his own needs. We see it on Sorkin's HBO show The Newsroom, in which he takes painstaking measures to raise up a flawed man as a god. In Steve Jobs, Sorkin gets mired in the same problems. He gets stuck in Jobs' reality distortion field.

(Spoilers ahead for major plot elements in Steve Jobs.)

The reality distortion field, a term reportedly coined by Apple's current vice president of software technology, Bud Tribble, explains how Jobs' considerable charisma allowed him to convince those around him his outlandish plans were realistic — ideas like squeezing two years of work into a 12-month sprint, or selling someone's own idea back to them as if it was Jobs' own. Former Apple employee Andy Hertzfeld described the field as "a confounding melange of a charismatic rhetorical style, an indomitable will and an eagerness to bend any fact to fit the purpose at hand."

"In [Jobs] presence, reality is malleable," Hertzfeld recalled Tribble saying. "He can convince anyone of practically anything. It wears off when he's not around, but it makes it hard to have realistic schedules."

It's a concept that comes up in the film itself — although it's attributed to Kate Winslet's character, Joanna Hoffman, instead of the absent Tribble. Interestingly, though Sorkin is clearly aware of it, he couldn't stop himself from falling prey to the same reality distortion field four years after Jobs' passing.

Jobs' family has criticized Steve Jobs for its unfair treatment, but if anything, the film is a touch too generous to its titular subject. It's not that he doesn't look like an asshole — he certainly does. He rants constantly and treats his co-workers like obstacles. The world is a solar system in which Jobs is the sun. That's not just what he believes, however; it's what the film portrays without a hint of irony.

Only once is he allowed to be wrong — and it is, in fact, when the reality distortion field is referenced. Hoffman has to point out to him that one of his assumptions was wrong. Jobs thought he lost Time magazine's Man of the Year to a computer because of statements the mother of his child made to the reporter is incorrect. On said Time issue's cover was a sculpture of a man sitting in front of a computer. The sculpture would have taken too much time to put together for said statements to have changed the cover plans. Jobs was never in contention for Man of the Year.

So Jobs' only mistake is about a magazine cover. That's it. There's no apology needed for implying the mother of his child was a slut in that very same magazine.

Nowhere did Sorkin fall more prey to Jobs' reality distortion field than in the film's finale. Before the 1998 launch of the iMac, Jobs feuds with his daughter Lisa, refusing to pay her Harvard tuition. Their attempt to make amends goes awry when neither will budge an inch, ending in Lisa calling the iMac's design akin to "Judy Jetson's Easy-Bake Oven."

It's a great line. Had Sorkin ended the film with Lisa storming out, representing an unbridgeable divide, as was true in reality, his movie would have achieved something distinctive: a portrait of a genius whose fatal flaw was his lack of connection to his family. Instead, the screenwriter tacks on a scene that feels lifted from another movie.

Of course Jobs will pay Lisa's tuition, he says, despite that not actually being true. He's making the iPod so she won't have to use a Walkman with cassette tapes anymore. He delays the launch of the iMac despite his allergy to tardiness just to beg her to stay and watch the launch — and she does. The film ends with Jobs greeted as a hero by the crowd, seen as a good father by his daughter and with respect by his rivals. He literally walks into the light.

Instead of making Steve Jobs a man, Sorkin made him a saint. Unfortunately, canonization isn't very interesting.

Inevitably, Steve Jobs will be compared to The Social Network, the last movie Sorkin penned about innovators in the Internet age. Boyle himself referenced the comparison at a Monday screening of the film, even calling Sorkin to write a third. Putting the movies together, however, makes Steve Jobs look even worse.

Both Jobs in this film and Mark Zuckerberg in The Social Network are jerks, but only Jobs gets elevated to godly status. Zuckerberg is allowed to be an innovator — a genius, even — and still retain the flaws that make him human, his failure to maintain personal relationships. That movie isn't any less fulfilling for taking the more ambitious, less happy-ending-friendly path.

If Steve Jobs had ended with Lisa burning their bridge, leaving her father to launch the iMac despite flaws, this could have been a really compelling film. Instead, Sorkin let his adoration of his subject get the better of him. He's not the first person to get stuck in the reality distortion field, but he may be the most disappointing.

Steve Jobs is in theaters now.