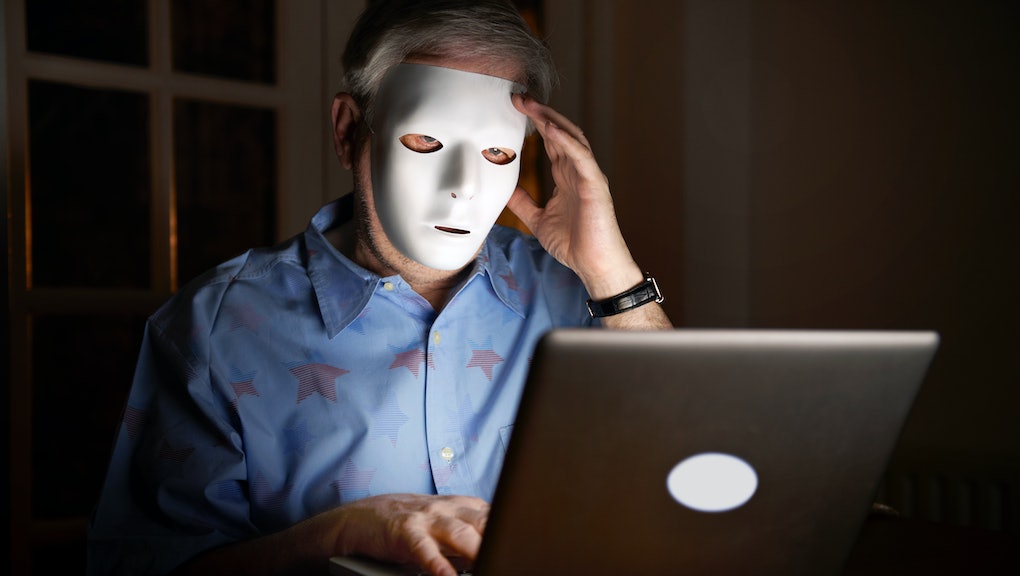 On Thursday, a Twitter user posted a picture of editor Lauren Nostro shortly after she published an article about Amber Rose's Los Angeles SlutWalk. The photo, which was placed next to a printout photo of Amber Rose, was covered with what appeared to be the Twitter user's semen.

Nostro was repulsed. "You guys wanna help me report this man who came on a printed out photo of my face?" she asked her Twitter followers.

They did. The Twitter user, who had a photo of Isla Vista, California, shooter Elliott Rodger as his avatar, has since been suspended from Twitter. But it's not just one dirtbag posting to just one woman. It happens to women all over the Internet.

However, issues arise when the men performing the acts are doing so without the permission of their subjects — and, in Nostro's case, when there's a violent or threatening sentiment behind it. Some of these photos are sourced from social media platforms, like Facebook or Snapchat; often, they're of women the man has never met. And sometimes, the photos are of women who have publicly expressed pro-feminist or sex-positive opinions, as was the case with Nostro.

"Some miscellaneous account with lots of dumb meninist-related sloganeering in his bio had sent me a 'tribute,'" Garvey told Mic. "I didn't know that was a thing that existed, though I've seen it a handful of times since, and was totally revulsed."

Websites exist solely for people to post photos of women they're friends with on Facebook, then describe them as sluts who deserve to be covered in cum. "She is one of the biggest sluts I've ever seen," one user posted, along with a string of photos that appear to be from the girl's Facebook and Snapchat accounts. "Destroy her, degrade her, fake her, cock her, tribute her." In one disturbing instance, a man claimed to have found a photo of a 13-year-old girl on Facebook and asked strangers on Reddit to perform the undertaking in exchange for photos of his mother or sister.

"Please show how much you appreciate this girl's intellect and feminist thinking," the user wrote. "Let her know what she means to you. Unzip yourself and give her a few minutes of your time by emptying your balls over her ugly face."

"It's just a picture of my face, and my shirt ... I am embarrassed and curious," she wrote. "What if I meet a guy who recognizes me? Or a guy who has done this to me (my picture)? Is that gonna be on his mind, and he is going to want to do this on my face?"

On the website, users are asked to vote whether it's normal or not and include comments about why someone might do that. Of those who voted, 79% of them said it was normal. "Maybe he was just attracted to you," one user suggested. Another noted that while it was a bit creepy, the man in question probably just had a crush on her.

Finding it so normal is indicative of the larger problem. Women are being sexually harassed online in record numbers, in instances ranging from receiving unsolicited dick pics to rape threats on Twitter to having their nude images posted without their consent on social media. When the organization Working to Halt Online Abuse looked at 3,787 incidents of people being harassed online, 72.5% of them were female. And when the Pew Research Center released its own statistics on online harassment, the instances of women being sexually harassed outnumbered men by 12%.

It's also difficult for women to report said harassment and ensure that trolls are being held accountable. "I felt sort of numb from the image, mostly just tried to wipe it from my brain instantly," Garvey said of the man who sent her the "tribute." "But I pretty quickly became enraged when I realized the hoops Twitter Support makes you jump through to take any action on these trolls."

Indeed, although social media platforms like Twitter have recently been making an effort to curb online harassment, many women have complained that the site does very little to ban or suspend trolls, even when death or rape threats are involved.