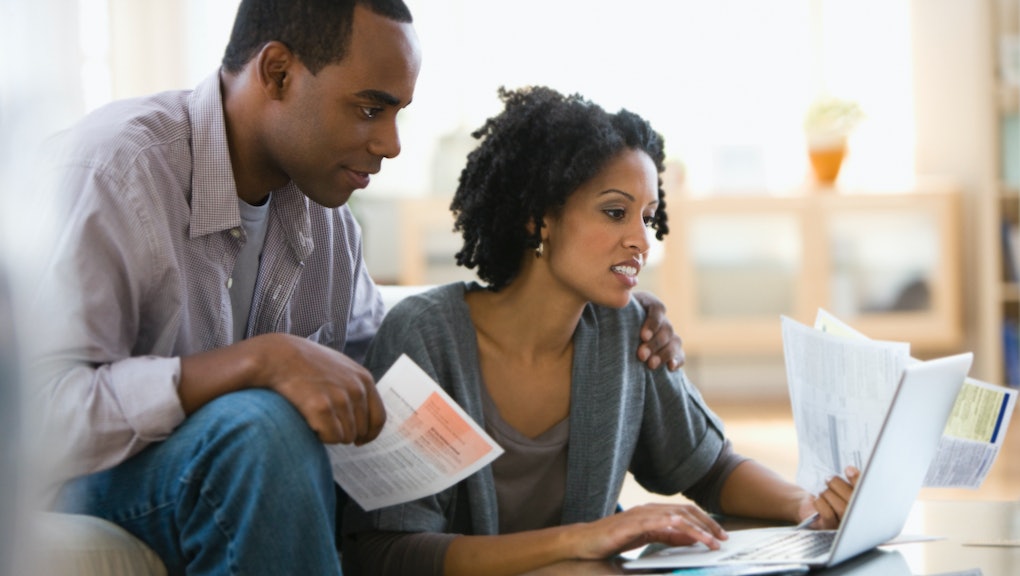 The town was the site of a national firestorm of controversy after the death of Michael Brown, the 18-year-old unarmed black man who was shot and killed by a white police officer in the mostly black St. Louis suburb. It set off a debate about police violence against communities of color that rages to this day. And as more people began to pay attention to the town, it seemed to epitomize a host of highly racialized problems in American society, perhaps the most striking of which was its overuse of tickets for minor violations to fund local government and incarcerate poor residents.

Now a new report shows that in the same county where Brown was shot and left to lay in the street for hours, another huge problem afflicts black residents more than white ones: seized wages from debt collection suits.

According to a first-of-its-kind report by ProPublica, a quiet but devastating source of financial strain for low-income black families in the area comes from lawsuits from companies seeking compensation for unpaid debt. While such lawsuits are also filed against white families, black residents face them at much higher rates. The report found one major utility company in the area successfully sued residents in predominantly black neighborhoods at four times the rate that it did in mostly white ones.

But the disparity doesn't appear to be because companies and courts have it out for black people.

It's not just a local trend. ProPublica's report involved digging up five years' worth of court judgments from St. Louis, Chicago and Newark, and found something remarkable: "Even accounting for income, the rate of judgments was twice as high in mostly black neighborhoods as it was in mostly white ones."

But the disparity doesn't appear to be because companies and courts have it out for black people. Rather, the suits and judgments are more common because of higher rates of defaulting on debt in black neighborhoods. And the reason for that is largely a function of wealth — how much extra cash a household has on hand to handle a problem when something goes awry.

Even when incomes are similar for black and white households, they have vastly different sets of resources to draw upon based on divergent histories of inheriting and generating wealth, mainly through home ownership, an institution that has been fraught with racism throughout American history.

The report: ProPublica's analysis found that in the City of St. Louis and its county, debt buyers, banks, hospitals, utilities and auto and high-cost lenders have taken at least $34 million from residents of the areas' predominantly black neighborhoods. About a quarter of the population lives in neighborhoods that are mostly black, but those neighborhoods are the target of about half of the area's court judgments.

In Jennings, Missouri, just a few miles from Ferguson, the typical household income is about $28,000, "an income level at which families spend, on average, all of their income on basic necessities," according to ProPublica. When on such a tight budget, a household is just one unmanageable expense away from disaster. When these expenses invariably arise, savings are needed to avert that disaster. That's when income matters far less than what a family already has stored away.

For the typical household in Jennings, a black family will have less than $700 at hand — a sum that can easily vanish with one expensive medical emergency.

The disparity in liquid assets is mirrored in net worth, most of which is tied to home ownership. In the middle income bracket, white families typically have about seven times more wealth than black families.

When someone fails to pay back a bill, companies are increasingly inclined to use courts and wage garnishment to retrieve their money. Judgments obtained in their favor can involve plaintiffs seizing up to 25% of a worker's after-tax pay. Paychecks deposited directly into bank accounts are fair game, as are other funds in the accounts. As far as protections are concerned, they cover the extremely poor. When they are applicable, "the burden is usually on debtors to figure out if and how the laws protect their assets," as ProPublica writes.

One of the most remarkable qualities of the whole phenomenon is how silently it operates. The strain of wage garnishment isn't a publicly discussed matter in neighborhoods where it's commonplace, perhaps because it is a source of embarrassment, only one of many financial predicaments or because everyone assumes their case is unique.

The disparity between white and black households in their ability to ward of this intrusion speaks to deeper dynamics of systemic prejudice. Wealth disparities between white and black households are easily the starkest illustration of the legacy of institutionalized racism in the housing market in the 20th century. They're a reminder that today's most nefarious effects of a history of racial domination have more to do with bad systems than bad people.