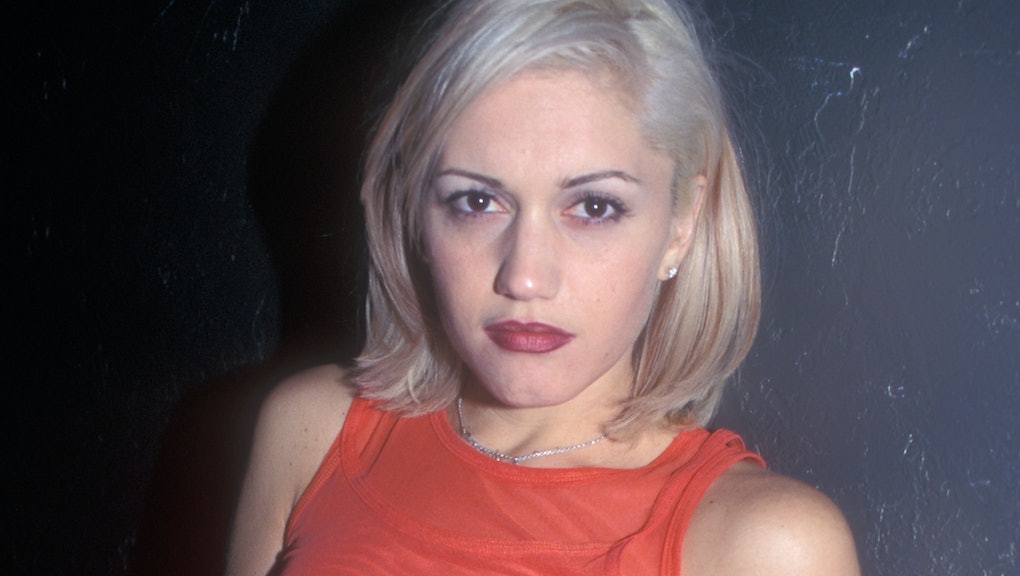 20 Years Ago, No Doubt's 'Tragic Kingdom' Changed These Girls' Lives

Way before "Rich Girl" or "Hollaback Girl," Gwen Stefani was just a girl. Twenty years ago, No Doubt brought a ska sound to the radio and one of the most influential women in music, Gwen Stefani, into our lives.

We've never been the same since.

Ilana Kaplan, writing for the Observer, said, "Stefani stood out as a central voice for the misfits ... [She] was a tomboy who wasn't afraid to speak up for anyone who was in-between. She was the pretty, creative, artsy girl in high school that wasn't afraid to stick up for herself or you."

Because Stefani is an icon, we asked Mic readers to tell us what Tragic Kingdom and Stefani meant to them when the band first came on the scene in the mid-'90s.

"I first heard No Doubt in about 1994 or 1995, when I was about 9 or 10 years old. I was still fairly new to Canada and trying to fit in at school. Gwen Stefani inspired me to be myself, not just then but all through my teen years. She didn't care about fitting in, she just did what worked for her, and it showed me I didn't need to be like everyone else." — Siobhan Kelly

"When I was an angry teenager, 'Just A Girl' made me feel empowered and that my anger and discontent for the status quo wasn't uncalled for or unheard of. It made me feel strong. Gwen's powerful vocals that spoke to raw emotions were the soundtrack to many major milestones in my life, and their music continues to inspire me to this day!" — Kjerstin Wood

Stefani's chance to steer the creative direction came when her brother, Eric, the former lead songwriter, left the band after eight years of little commercial success.

"As soon as he left, a kind of creativity opened up for me," Stefani told Interview magazine. "I think that's why a lot of the songs on Tragic Kingdom are much more personal than on our previous record, because I wrote almost all the lyrics on this one."

Seeing a woman as the lead singer and creative force behind one of the hottest bands on the radio changed many of Mic's readers' minds about what they could accomplish.

"I first heard No Doubt in 1994, and I was inspired by Gwen Stefani in so many ways! Her music, her style, her attitude. Gwen seemed like someone you knew. She wasn't afraid to be vulnerable and express her feelings. Like, she could fucking rock, yet still just want to be loved." — Danielle Rondero

"I remember listening to Tragic Kingdom in my living room over and over and over as a young teen. Gwen inspired me because I loved music and I wanted to write my own music, and to see such a strong female writing songs and singing made me realize I could do it too. I write my own music now and I've sung in bands, and I feel like in a huge way, that's because of Gwen. She's still a hero to me." — Amanda Davis

"I'll never forget the first time I saw Gwen. She looked like the Barbie doll I had always wanted: raw, edgy and classic with her platinum blonde ponytail and bright red lipstick. When I was old enough to visit a CD store by myself, I bought No Doubt's whole discography.  Gwen empowered so many of us who dreamed of large crowds, guitars and a chance to highlight in a male-dominated world. She's a true role model, from her music to her entrepreneur abilities." — Samantha Vogeley

If you were a teenager when you first saw her, you wanted to be her.

"I was 17 when I came across the music video for 'Spiderwebs' one afternoon, and I saw this super cool girl singing and leading a band of rowdy boys! There was something about the way she moved that was so unafraid. Her energy really got to me! Her outfit and entire look was an instant inspiration to this gangly teen. I saved up my allowance to buy the Tragic Kingdom CD, and that was just the beginning of my Gwen Stefani/No Doubt love story. I named my firstborn Gwen (who is now 14!) and my baby loves No Doubt too!" — Joanne Enriquez Bohol

"I first laid eyes on Gwen Stefani watching the 'Just a Girl' video on MTV as a 13-year-old kid, and my world was forever changed. She sure did inspire me — inspire me to ask my mother if I could bleach my hair, and when her answer was a resounding 'no,' I went to the laundry room, fetched the Clorox and, being 13 and not knowing the difference between laundry bleach and hair product, ended up grounded for a week with tufts of bleached hair falling out of my head." — Melissa D'Lando

"I was 15 or 16 and big into grunge the first time I heard 'Just a Girl,' and I was blown away. The lyrics! The style! The energy! I instantly thought, 'She gets it.' They've remained one of my favorite bands for 20 years, and I still think that song and video are badass and fresh." — Kelly Krummel Saccomanno

And it's not only girls.

Though we originally asked women what they thought of Stefani, many men spoke about her as an inspiration as well.

"I didn't know that I was a feminist until I watched Stefani's performance in the 'Just a Girl' video. Listening to her express frustration with gender expectations was the metaphorical wake-up call/flip of the switch/formal invite to join the feminist movement that I needed. Although a white heterosexual male, I identified with Stefani's struggle to own her gender while not checking off every box in the corresponding stereotype. That was my story in relation to manhood. Why couldn't she be 'girly' and also be a rockstar? Why are those considered mutually exclusive?" — Eric Lynch

"My cousin put on Tragic Kingdom and I was utterly transfixed on Gwen's voice and the elements of rock and punk. Gwen being the frontwoman was pretty amazing. My cousin looked up to her and I guess I did too. She was cool, beautiful and had this amazing fashion sense that I wished to replicate (though my mother wouldn't let me). I begged and begged my parents to buy the album, but it was sold out everywhere. Well, after a few weeks, I came home one day after school and found the album sitting in the kitchen. I don't think I've ever had an album that I've completely thrashed due to the amount of times I've played it. Even the booklet was read cover to cover." — James Panagis