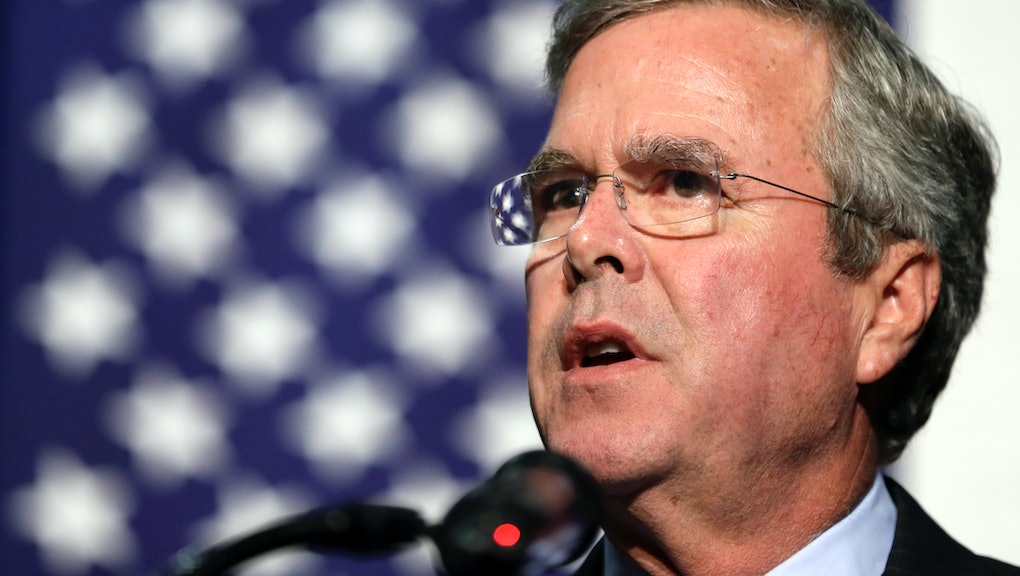 Jeb Bush Jokes That "Washington" Is More Offensive Than "Redskins"

Republican presidential candidate Jeb Bush thinks the name of the nation's capital is more offensive than an actual racial slur.

In an interview with radio host Hugh Hewitt on Thursday, Hewitt asked the former Florida governor his thoughts on the turmoil in Washington, D.C., amid the congressional GOP's inability to name a new Speaker of the House.

Bush responded by making an apparent joke about the controversy surrounding the Washington Redskins' name, which is based on an epithet in use during the genocide of Native Americans in the 19th century.

The joke that "Washington" is the really offensive part of the team's name was previously made by satirical publication the Onion, though that publication was making a point about the perceived obliviousness of team owner Dan Snyder.

As Talking Points Memo points out, Bush has previously defended the Redskins name as not "offensive," while Snyder has donated $100,000 to Bush-affiliated super PAC Right to Rise.

While a certain number of gaffes is inevitable during any political campaign, Bush has not made it easy for himself this campaign season. Critics have pounced on the candidate's statements that half a billion is too much to spend on women's health care, that the Iraq war was a "good deal" and that he would raise the Social Security retirement age to "68 or 70," among others.

Still, this incident is unlikely to hurt Bush much if at all, since a "large but shrinking" majority of the American public continues to believe the name should not be changed.