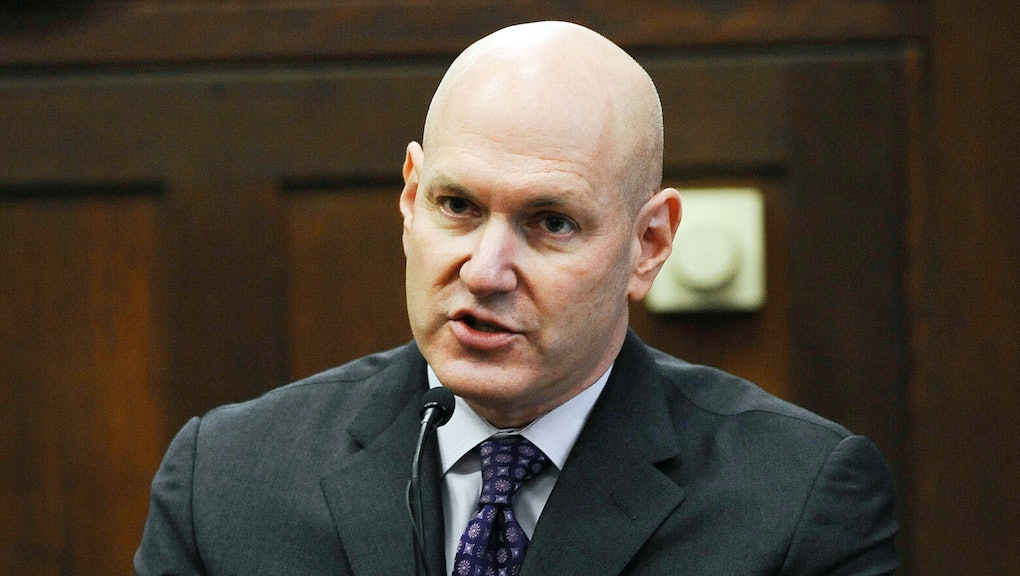 Republican presidential candidate and famed neurosurgeon Ben Carson amped up the gun rights rhetoric this week by saying if German civilians were better armed, Adolf Hitler's chances to pull off genocide "would have been greatly diminished."

Now, a Carson booster and regular Fox News contributor has taken Carson's views even further, defending him in a Friday op-ed with a troubling outlook on the victims of the Holocaust.

Fox News' Keith Ablow's column is titled "Why Ben Carson Is Right About Jews, the Holocaust and Guns."

There's not much reading to do between the lines. Ablow's piece is vile, portraying the Jewish population in Europe as passive at best and complicit in their own destruction at worst.

In a three-paragraph section of the column, Ablow misunderstands the nature of the Holocaust, discusses how Jews failed to learn the lessons of the Old Testament and argues the Nazis would have murdered fewer people had they just stood up for themselves with firearms.

Ablow is basically arguing gun rights would have prevented the Holocaust, but he doesn't stop there. He insinuates Hitler's victims lacked courage.

Here's a memo to Ablow: The Jewish people of Europe did resist, often with the same ferocity he seems to think they lacked. The United States Holocaust Memorial Museum has on record over 100 separate armed rebellions by residents of occupied territories in Poland and the Soviet Union, where Jewish resistance members often fought to the last. In almost every occasion, the survivors were liquidated.

During the famous Warsaw 1943 uprising, a thousand or more Jews in the occupied city of Warsaw who had been forced into a decrepit ghetto rose up against Gestapo, Wehrmacht and Waffen-S.S. troops and put up incredible resistance for nearly a month.

Survivor Marek Edelman describes the resistance beginning despite "the terror of what was happening and by fear of large-scale retaliations on the part of the Germans ... the events began moving at a breath-taking pace. The ghetto streets became a bloody slaughterhouse. The Germans made it a habit to shoot passers-by without the slightest provocation." Contact with the outside world was almost completely cut off, and the systematic murder of all inhabitants begun.

Edelman writes the Germans set up blockades to cut the inhabitants off from one another and focused their power on one block at a time, clearing houses and shooting everyone who remained. When the uprising began, the resistance was so ferocious that the Germans attempted to negotiate. The partisans shot the negotiators.

"From balconies, windows, and rooftops they showered the moving truckloads of S.S.-men with hand grenades and with rifle and pistol fire," Edelman recalls. In response, the Germans burnt entire districts of the Ghetto to the ground. Jewish partisans "descended to the underground shelters occupied by the civilian population to defend whatever could still be defended."

"Whoever survived the German bullets, whoever was not gassed, committed suicide, for it was quite clear that from here there was no way out, and nobody even considered being taken alive by the Germans," Edelman writes. "Jurek Wilner called upon all partisans to commit suicide together. Lutek Rotblat shot his mother, his sister, then himself. Ruth fired at herself seven times."

Similar uprisings against German authorities occurred even in the death camps where many of the estimated 6 million Jewish people who died during the Holocaust were killed. One uprising at the Treblinka facility resulted in 300 escapes.

Ablow's politicizing the Holocaust: The unfortunate reality is German forces enjoyed overwhelming superiority of arms over civilians in territories under their control. Access to firearms would have made little difference. But instead of marching helplessly to their doom, Jews all across Europe fought back despite overwhelming odds. Millions of others escaped into safer territory. Ablow is insulting their memory as well as those of those marched by force into death camps.

The reception to his column on Twitter was nearly universally negative.

Carson himself is partly to blame for this, since it's exactly the debate he opened with his original comments on the Holocaust and gun rights. (The candidate has also spent the last week doubling down on his statements he wouldn't just stand there and get shot during a mass shooting.)

But Carson is simultaneously enjoying a surge in the polls that has carried him to second place in the Republican primary contest, with Real Clear Politics ranking him behind billionaire real-estate mogul Donald Trump with the support of 17.2% of the Republican primary electorate. The first few months of the primary election have demonstrated offensive views won't necessarily sink a candidacy, and it should concern anyone that prominent candidates are flirting with such ugly rhetoric.

Oct. 10, 2015: This story has been updated to clarify the electorate that supports Ben Carson.