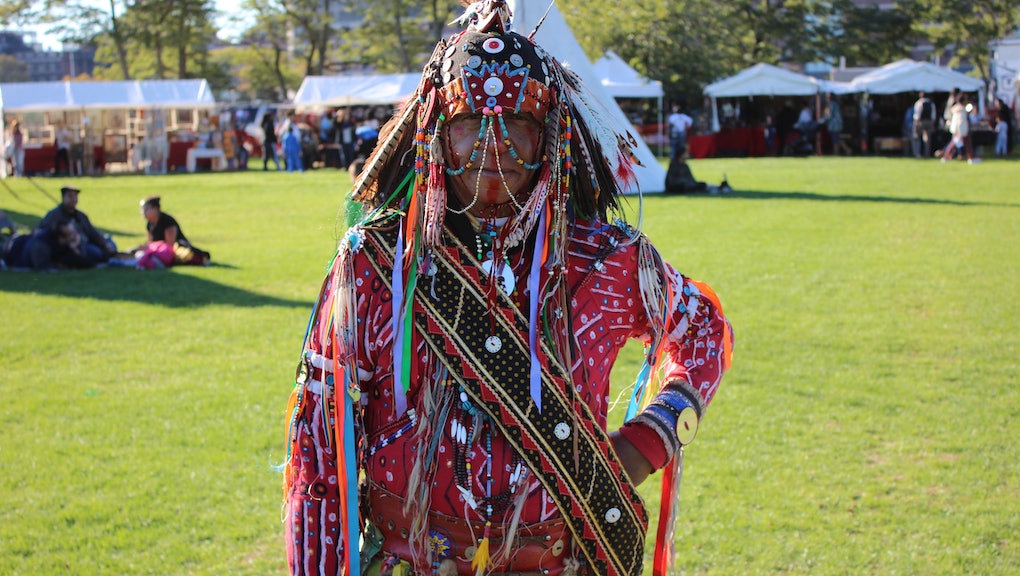 Randall's Island, New York — Just blocks away from where New York City's Columbus Day parade will take place Monday, there's another kind of celebration going on, one without all the pomp and circumstance and hidden away from the television cameras.

On Randall's Island, a stone's throw from east Manhattan's shoreline, hundreds of Native American artists, educators, dancers and performers gathered all weekend for a powwow to honor indigenous people around the world. Instead of Columbus Day, they're here to celebrate Indigenous People's Day, which is devoted to healing and lifting up the rich history and culture of Native Americans.

The event, organized by the Redhawk Native American Arts Council, joins a growing movement of organizations and cities across the United States that see Christopher Columbus as someone who oversaw the genocide of Native American people. (For more context, watch John Oliver's segment, "Columbus Day: Why Is That Still a Thing?")

The mood here is spirited and hopeful despite the circumstances, featuring a panoply of authentic Native American cuisine, arts and crafts, music, singing and lively dance performances. Participants are intent on looking forward, not only into the past, and counteracting media stereotypes about the existence of Native American people today. According to the organization's website, "We seek to reclaim and redefine this day to celebrate the rich cultures and histories of indigenous people in the Americas, rather than a day dedicated to the forced colonization of native peoples."

Mic asked eight different participants what they want the country to know as much of America celebrates Columbus Day on Monday. Here are their responses.

"Columbus Day is false. Columbus didn't discover the United States. It was a genocide. He was lost at sea, he found his way this way and there were millions of people here. The tribes have been here for thousands of years."

"I want everyone to be aware that Natives are still here. We're not pretending. This is not a costume. This is an outfit, and I wear this all the time. We are not vanishing like the history books in school say we are."

"Usually, you only see my people in books. We're a paragraph, in a chapter, within a book. I want my people to be the whole book. We're a huge part of why this country is the way it is now. Television teaches it all wrong."

"Columbus did not discover America. Columbus Day is just another day to me. We don't need a holiday. What does it do for Natives? Does it help feed us?"

"I've been dancing since I was 3 years old. I want to be a role model for younger generations. I want to keep them rooted."

"I want people to be aware there is cultural diversity out there. We believe we were the first people to inherit this world. Keep in mind, there are so many cultures out there. Don't just focus on the fact that Columbus perceives himself to be the founder of this country."

"I try not to celebrate anything. I try to make Columbus Day a normal day. Because I don't want to perpetuate any type of energy in his direction. He doesn't even deserve negative energy."

"We're all human beings. That is the teaching central to all indigenous cultures. Columbus wasn't the first one here. We always opened our doors. When you come to a place and you don't have that mentality, and your mentality is gold, you have to justify why you're going to commit genocide on people and how you're going to get what you want from them."

"This is a chance for us to be together as indigenous people. We have to stop seeing this reality through the eyes of the culture that conquered us."

"I'm a young artist. I'm here celebrating the gathering of our people. Being here is good medicine and healing for us."

"I'm here to honor my ancestors and friends. I want people to know we're still here. The Indian people are alive and well and still keeping their culture alive."