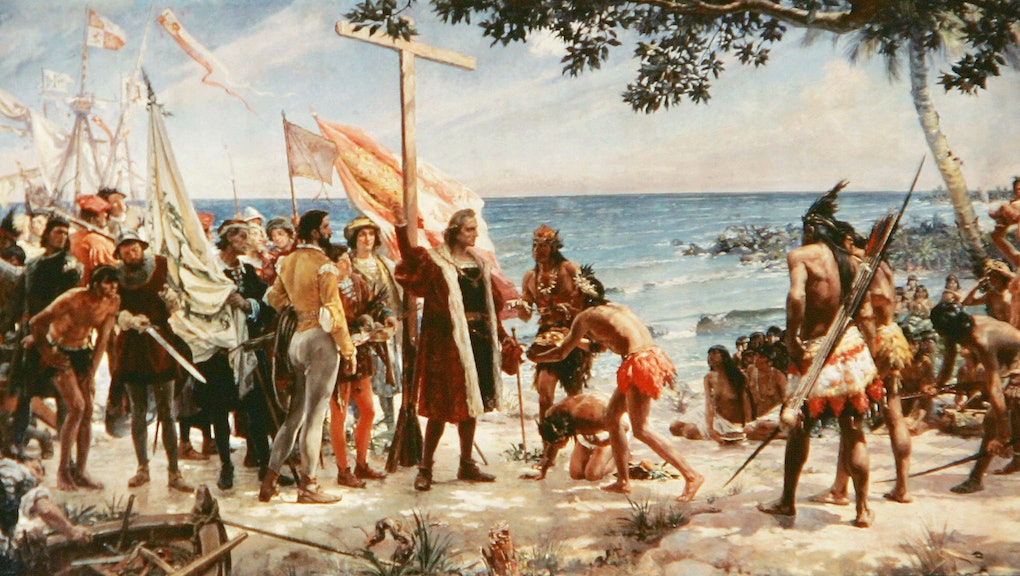 On Oct. 12, 1492, a Genoese explorer named Christopher Columbus made landfall in the Bahamas after a five-week journey across the seas. While originally searching for a sea route to the East Indies, Columbus stumbled upon a continent full of people he immediately decided to mercilessly exploit for riches.

When Columbus arrived, an estimated hundreds of thousands of Arawak people were living in the islands; 70 years later, the native population had been almost totally exterminated. In the centuries to follow, similar fates befell most of the native peoples of the New World. Yet the United States has celebrated Columbus officially and relatively uncritically since 1937. In 1940, President Franklin Delano Roosevelt declared Columbus Day in recognition of "a new beginning in the march of human progress."

Since Columbus actually discovered the Americas like "a meteorite discovered the dinosaurs," it might seem a little gauche to actually celebrate the legacy of the man himself. So here are seven major discoveries that actually can be attributed to white people to read about on your day off.

1. Discovering things that were already discovered!

White people often get credit for things they didn't discover — or as CollegeHumor coins it, Columbusing.

As Mic's Zak Cheney-Rice wrote last year, the list of things Caucasians have followed the Italian's lead on includes everything from lacrosse — "The true lacrosse originators were the Algonquian Native Americans of the St. Lawrence Valley region of the American Northeast" — to Jesus — "Transforming a guy who ostensibly hailed from the brownest region this side of Bolivia into this:

"In the face of being shamed and persecuted, African-Americans have cultivated art and fashion to maintain pride in who they are, so to see other cultures take this and profit from it while still allowing the shame and persecution to persist makes us want to holler," Kareem Abdul-Jabbar wrote at Time in August.

Okay, white people didn't actually invent slavery — it's a human phenomenon with deep historical roots in virtually every part of the world. But with the 18th-century dawn of international colonialism, European empires inflicted the most brutal systems of domination and control the planet had ever seen, taking over and exploiting much of the known world.

While slavery was eventually abolished in most of Europe, the entire southern half of the United States continued using slavery to power industrial-scale agriculture. As Samuel H. Williamson and Louis P. Cain write at Measuring Worth, slavery was so critical to the economic well-being of the antebellum South that "some economic historians have hypothesized that Southerners had so much wealth tied up in slaves that they did not invest sufficiently in other types of investments."

Everyone's favorite economic system originated in western Europe in the late 19th century and quickly took hold in the U.S. before spreading like wildfire across the planet, often by force. Capitalism and white privilege (and supremacy) often go hand-in-hand, and it is hardly a coincidence that the strongest proponents of free-market economics in the U.S. tend to be white men.

The bipartisan consensus on neoliberalism also happily encourages a colorblind approach to economic thinking, something else many white folks will love.

The shade thrown at Starbucks' pumpkin spice latte may have become so ubiquitous it's kind of passé, but for now, it remains one of white America's keystone accomplishments.

"It's not pumpkin or pumpkin spice that's the problem; it's the commodification of our resources as somehow exotic when used in nonwhite foods and comfort when used in white foods," Black Girl Dangerous's Sasanka Jinadasa writes.

Cheap racial stereotype? Maybe. But in an aggregate sense, it really is true: Much of European cuisine uses less seasoning than its international counterparts.

NPR's Maanvi Singh writes that the trend towards a subtler European palette evolved after spices became ubiquitous during the colonial period, destroying their traditional image as status symbols.

"So the elite recoiled from the increasing popularity of spices," New York University food expert Krishnendu Ray told Singh. "They moved on to an aesthetic theory of taste. Rather than infusing food with spice, they said things should taste like themselves. Meat should taste like meat, and anything you add only serves to intensify the existing flavors."

Singh writes that the shift coincided with evolving understandings about diet and health in Europe, which served to emphasize fresher vegetables and greens and de-emphasize the role of spices as medicine.

This might not be a truly comprehensive explanation of the longstanding connection between boring white people and boring white bread, but it's a start.

The first commissioner of the Federal Bureau of Narcotics, Harry Anslinger, was instrumental in pushing national marijuana prohibition for explicitly bigoted reasons; according to CBS News, quotes attributed to Anslinger include "Reefer makes darkies think they're as good as white men," and, "There are 100,000 total marijuana smokers in the U.S., and most are Negroes, Hispanics, Filipinos and entertainers. Their Satanic music, jazz and swing, result from marijuana use. This marijuana causes white women to seek sexual relations with Negroes, entertainers and any others."

Anslinger's organization later grew into the Drug Enforcement Agency, which was formed in 1973 following President Richard Nixon's declaration of a "war on drugs." Subsequent anti-drug operations in the U.S. and Europe have helped sustain drug-related violence in regions like South America.

In the U.S., drug laws are disproportionately enforced against poor people and people of color, with overwhelming evidence suggesting black people are arrested for marijuana possession at rates much higher than whites. (For what it's worth, surveys suggest white people do drugs at similar or higher rates than minorities.)

Incredibly, a slight majority of white people in the U.S. now believe they are the victim of just as much or more racism than actual minorities. One Tufts University and Harvard Business School survey in 2011 found U.S. whites believed they had "replaced blacks as the primary victims of racial discrimination in contemporary America." Similar results were found by the Public Religion Research Institute in 2014, which found 52% of whites think so-called reverse racism "has become as big a problem as discrimination against blacks and other minorities."