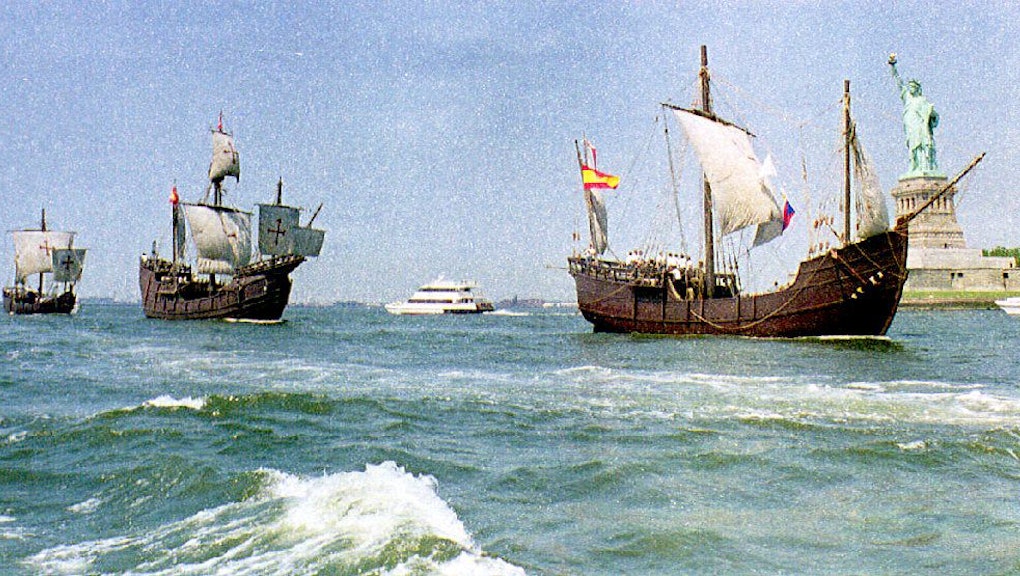 As much as they tend to welcome three-day weekends with overworked, open arms, Americans are increasingly suspicious of celebrating conquistador Christopher Columbus. People are starting to find his pillaging and enslaving of Native Americans unpalatable. That and the fact he never actually made it to North America make the whole holiday somewhat questionable.

It is of little surprise, then, that artist and activist Keegan Stephan's tweet highlighting offensive Columbus quotes is making the Twitter rounds this year, garnering more than a thousand retweets in three hours Monday morning.

"The Indians are so naive and so free with their possessions that no one who has not witnessed them would believe it. When you ask for something they have, they never say, 'no,'" the Columbus quote in Stephan's tweet reads. "To the contrary, they offer to share with anyone."

"They would make fine servants," a second quote from the tweet reads. "With 50 men, we could subjugate them all and make them do whatever we want."

With the retweets also came a seemingly endless slew of responses, many calling for an end to Columbus Day. A growing movement to replace the holiday with Indigenous Peoples' Day can be seen among the ensuing tweets.

A large swath of the population has been galvanized by Native American advocacy of late, which fights for equal treatment of systematically overlooked and exploited indigenous people. On Sunday, California's Gov. Jerry Brown signed into law the banishment of the term "redskins" from its public schools, for example. And cities and counties across America, as recently as Tuesday and Wednesday, formally changed Columbus Day to Indigenous Peoples' day.

The man once regarded as a hero and explorer is swiftly receiving a reputation makeover, with the help of social media. He's progressively being seen as a terrorist instead.