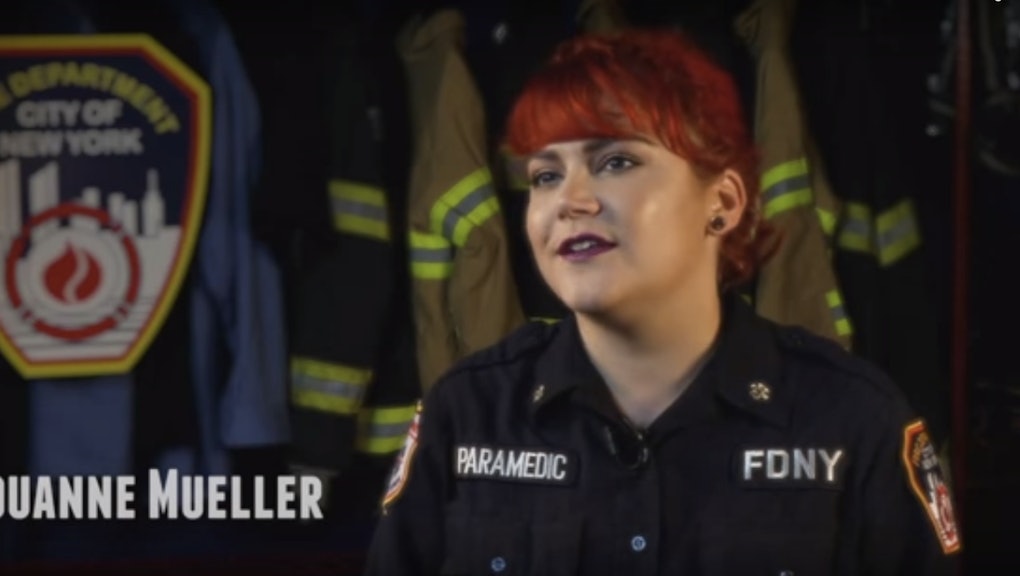 The Fire Department of New York has joined forces with the It Gets Better Project to create a video featuring LGBT firefighters and paramedics sharing their stories and assuring young people struggling with sexual identity that there remains hope.

"When I came out to my mother, she broke down crying because she didn't realize that her child had been carrying a weight that big for that long," Samantha Wilding, a paramedic, tells the camera.

The firefighters and paramedics share a range of coming out stories, from acceptance to rejection by their loved ones. But, ultimately, none of them regrets doing it or appears ashamed of who they are. Conversely, the video's common theme is one of pride. "I am the other and I'm okay with that," Allen reflects.

"If I could give a message to myself when I was a teen, I would tell myself not to give up on being who you are," Rev. Ann Kansfield, FDNY's first openly lesbian chaplain, says in the video.

"Don't let anyone tell you who to be, or how to be, that's not true to who you are," another says.

More than 4 in 10 LGBT youth feel as though they live in unaccepting communities, according to the Human Rights Campaign, and they are two times as likely to report being physically assaulted than their heterosexual counterparts. Youth struggling with sexual identity are also four times more likely to attempt suicide, the Trevor Project reports. The statistics are even worse among Hispanic and black youth.

Writer Dan Savage and his partner, Terry Miller, started the It Gets Better Project in 2010 precisely because of the difficulties so many LGBT youth still face. "The It Gets Better Project's mission is to communicate to lesbian, gay, bisexual and transgender youth around the world that it gets better, and to create and inspire the changes needed to make it better for them," their website reads.

The FDNY, a traditionally celebrated institution for its heroism, is perhaps all the more impactful with this message of acceptance. Allen concludes that everyone, regardless of orientation, deserves acceptance: "Love yourself, be okay with yourself, because it is okay. You're worthy of love."