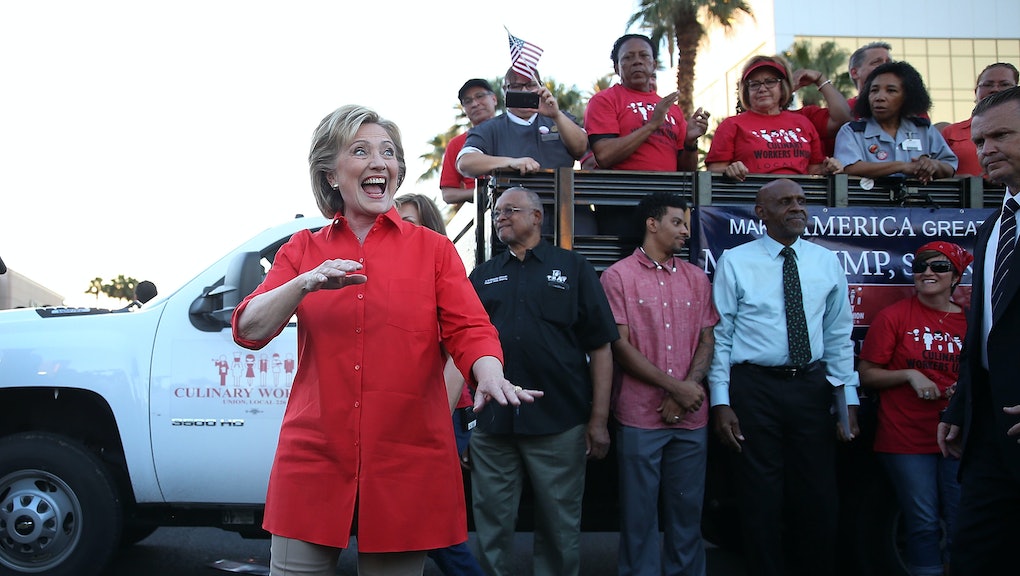 Four Burning Questions Ahead of the First 2015 Democratic Presidential Debate

Las Vegas — The scrappy primary duel no one predicted is set to escalate Tuesday night, as the Democratic candidates for president descend on the Nevada desert for the opening debate of this increasingly unruly nominating contest.

Hillary Clinton made a splashy entrance on Monday, joining a band of union workers in their protests outside Donald Trump's hotel on the Vegas strip. Laying low was Sen. Bernie Sanders (I-Vt.), who will, for a couple hours at least, line up to Clinton's right during the main event, which could still feature a late entry from Vice President Joe Biden. (Keep an eye on that flight tracker!)

Biden, whose public schedule calls only for "meetings at the White House," is unlikely to venture cross-country for Tuesday night's festivities, but the will-he-or-won't-he chatter is cranking up as the hour nears. Debate host CNN even has an extra lectern waiting in the wings, should the mood strike.

But the media's clamor for the vice president to energize the proceedings, though likely to linger throughout and beyond the debate, shouldn't distract from what could be a compelling face-off between Clinton and Sanders.

It's hard to think of a pair of presidential candidates in the modern era with comparably agile, wonkish talents. The Democratic National Committee seems hellbent on protecting Clinton from overexposure in these forums — the party scheduled only six scheduled debates this season, compared with the 25 used to settle the 2008 competition — but would it surprise anyone if she excelled in what is likely to be a refreshingly issues-driven discussion?

For Sanders, his task is a bit more tricky. The subjective nature of the analysis that follows debates means his performance will be measured on an assortment of scales, which is not unusual. If Sanders, for all the glory of his summer surge, is really going to break through and overtake Clinton, he still has work to do with large pieces of the electorate, from the minority voters who haven't quite offered their trust, to the establishment of the party, which remains reluctant to commit money or love to a candidate they still do not believe can win a general election.

Martin O'Malley will be to the front-runner's left on stage and on substance. An early favorite to emerge as the liberal alternative to Clinton, the former Maryland governor has struggled to crack 3% in the polls. But if his campaign's latest round of public pronouncements are any indication, the increasingly desperate O'Malley might be the most likely to say something memorable.

With hours to go now before the candidates pile on stage — former Sens. Jim Webb (Va.) and Lincoln Chaffee (R.I.) will be there too — here are four questions we look forward to seeing answered by night's end.

1. Will Clinton go after Sanders?

Yes, but you'll have to pay close attention to hear or see it. Despite Sanders' rise in the polls, he remains an overwhelming underdog in the race for the nomination. Clinton retains a substantial lead nationally and, regardless of how the votes break down in Iowa and New Hampshire, enjoys a durable advantage in the second wave of contests, both in Nevada and South Carolina. She also has an eye on the general election, and she'll need to harness the energy of Sanders supporters if she captures the nomination.

So, what does it mean for Tuesday night?

This may be Las Vegas, but don't expect Clinton to launch any haymakers at the self-described democratic socialist on stage. Jabs, on the other hand, should be plentiful. If past performance — notably the 2008 debates with then-Sen. Barack Obama — is any indication, Clinton will do her best to put a subtle pin in the Sanders bubble. That means matter-of-fact questions about the political feasibility of his signature policy proposals, which moderate Democrats worry are too costly.

Sanders will be prepared with answers, or at least crisp deflections. He has spent the better part of six months answering similar criticism from the press. At issue is whether Clinton will double back and pursue more details.

For instance, Sanders has introduced a bill to make college tuition-free. He would pay for this by imposing a so-called "Robin Hood Tax" on certain Wall Street transactions. A heavy lift, sure, but one unlikely to meet with eye-rolling skepticism on the debate stage. Clinton's own debt-free college plan, which is arguably more ambitious, would also be funded by tax hikes, but the details remain murky. Pursuing Sanders down that rabbit hole could leave them both damaged. Clinton has shown patience throughout the summer; expect more of it on Tuesday night.

2. Can Bernie effectively "contrast" himself with Hillary?

Sanders and his top advisors have been remarkably open about their plans. The first debate represents a unique opportunity to illustrate the "contrast" between him and Clinton. When campaigns and candidates talk about drawing meaningful distinctions, that's usually code for "We're planning to get aggressive." Though Sanders campaign wiseman Tad Devine has promised no "head-hunting," it should be a treat to see his man try to land some body blows.

But there are risks in that approach, especially from the underdog. Sanders' campaign is built on a feel-good appeal to true-believer progressives. Some of his more rabid supporters might be anxious for him take a whack at Clinton for vacillating on issues like the Keystone Pipeline, but Sanders will above all else seek to present himself as a reasoned and reasonable option. Picking up two endorsements from members of Congress over the past week was a big first step in showing that he might be able to rally the professional wing of the party behind him. A competent performance on Tuesday night could win over a few more.

3. Why is the DNC so worried about these debates?

Based on the way they've gone about scheduling and spacing out these meetings, it often appears the DNC would prefer they take place behind closed doors — or not at all. Three of the six are scheduled for weekends, when viewership will be lower. One of the weekend debates is set for Dec. 19, when millions of Americans will be traveling ahead of the Christmas holiday.

O'Malley has the led the charge in calling for more debates, all but accusing DNC chairwoman Debbie Wasserman-Schultz, a Florida congresswoman, of rigging the process for Clinton, a friend and ally. Though this may fall short of a cloak-and-dagger conspiracy, an increasing number of mainstream Democrats have begun to publicly question a very questionable process. In early September, two DNC vice chairs, Hawaii Rep. Tulsi Gabbard and former Minneapolis Mayor R.T. Rybak, registered their concerns in an open letter on Facebook. For her trouble, Gabbard said Sunday she had been disinvited from the debate, lest her presence become a "distraction."

It will be interesting to see how O'Malley manages the issue, which Clinton and Sanders have addressed in passing while simultaneously passing up any opportunity to put real pressure on the party.

4. Can O'Malley finally strike a nerve?

If O'Malley flames out of this campaign after Tuesday night, it won't be for a lack of effort. A former Baltimore mayor and two-term governor of Maryland, O'Malley, like Clinton and Sanders, is well drilled on policy questions. But for almost a year now, he has been splitting his time between Iowa and New Hampshire without much to show for it. Anything less than a game-changing performance in Las Vegas might lead to a winding-down of his operation.

For that reason, he will enter this debate hunting for headlines. Unlike Sanders, who has generally reacted kindly — or not at all — to Clinton's perceived missteps, the O'Malley campaign has shown itself to be more than happy to level all kinds of shots her way.

For instance, there was his response to the former secretary of state's announcement last week that she would not support the Trans-Pacific Partnership, a trade deal Clinton helped to write and broker during her time in the Obama administration. Minutes after she went public with her pirouette, O'Malley released a statement that began "Wow! That's a reversal!"

When Clinton finally came out against the construction of the Keystone pipeline, he went even harder.

"On issue after issue — marriage equality, drivers licenses for undocumented immigrants, children fleeing violence in Central America, the Syrian refugee crisis and now the Keystone Pipeline, Secretary Clinton has followed — not forged — public opinion," O'Malley said in a statement. "Leadership is about stating where you stand on critical issues, regardless of how they poll or focus group."

If O'Malley can conjure some similarly acid lines on the debate stage, eyeball-to-eyeball with his old friend, then this surprising primary drama might still have a couple more twists left.

The debate will air on CNN and stream at CNN.com beginning at 8:30 p.m. Eastern on Tuesday.