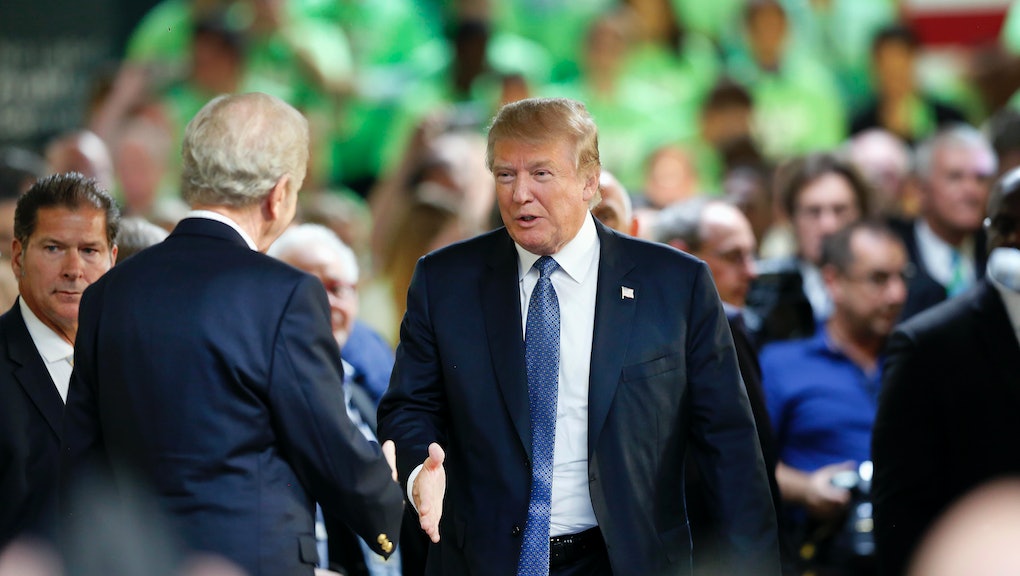 Behind the Scenes at the No Labels Convention, Where Trump Was Anything But Bipartisan

Manchester, New Hampshire — At an event Monday extolling the benefits of bipartisanship, all eyes were focused on the most divisive candidate the Republican Party has to offer. They didn't like what they saw.

Billionaire agitator Donald Trump was the highest-profile candidate to appear at the Problem Solvers Convention in New Hampshire, a bipartisan gathering in the nation's first primary state sponsored by No Labels, a political organization with the self-imposed mission of "ushering in a new era of focused problem-solving in American politics." While the event featured speakers ranging from Republican presidential candidate and New Jersey Gov. Chris Christie to the prison guard with the mustache from Orange Is the New Black, Trump's insurgent candidacy was a significant draw for the audience — and for the press.

Although Trump made gestures in favor of civility in political discourse, the Republican front-runner never seemed entirely comfortable with the event's reach-across-the-aisle vibe, defaulting into insults, dismissals and stump-speech pablum before he even walked onstage. Attendees said they were hoping for substance over sideshows, but many walked away with an earful of Trump-style campaigning as usual — which might indicate Trump's self-centric campaign style may have reached the limits of its attraction.

There was hope at the beginning. Trump's celebrity was on full display at the event. He had barely made it into the hotel lobby before he was swarmed with requests for selfies from convention attendees. A flatbed truck in the parking lot featured a 6-foot tall rotating foam-board sign that urged New Hampshire voters to support him.

"It's been getting saner," a reporter for the Associated Press noted hopefully, in reference to the unhinged press scrum that manifested after the first primary debate in Cleveland, where at least three members of the press were nearly trampled in the crush of reporters attempting to speak to Trump. Where members of the press had once stampeded to get a word from Trump, now they merely squeezed.

But "saner" turned out to be relative, once Trump had escaped the selfie-seeking crowds outside the Manchester Radisson to reach his natural environment at the center of three dozen journalists. With the first question, Trump was out of the gate.

"I thought he did terribly last night, actually, on 60 Minutes," Trump said of President Barack Obama's interview on the CBS program the previous night. "Well, I think it's not gonna be very well-rated," Trump said of the upcoming Democratic primary debate Tuesday. "Our country is going to hell," Trump said of, well, everything.

After being prodded into acknowledging that the event at which he was about to speak was focused on solution-based bipartisan pragmatism, Trump managed a few remarkable feats of apophasis by turning compliments into insults.

"I have no problems with Lindsey Graham — I mean, he's registering zero in the polls," he said, dismissing the South Carolina senator whose criticisms of Trump's arriviste candidacy have been nothing short of pointed.

Still, Trump defended himself to the assembled press as a paragon of civility. According to Trump, it was his scurrilous primary opponents who are the true masterminds of cheap political attacks. "I only go after them when they go after me — I'm a counterpuncher," he said. "They go after me, I go after them, and they drop out of the race."

Trump's speech: Once onstage, the disconnect continued. As is tradition at the Problem Solvers Convention, Trump was welcomed to the stage by former Connecticut Democratic senator and vice presidential nominee Joe Lieberman, who now serves as co-chairman of No Labels.

Lieberman sidestepped the divisive nature of the construction magnate's candidacy by calling it "unique in many ways," to the general amusement of the crowd. Trump's campaign, Lieberman said admiringly, tapped into a national mood of "disappointment, disdain and anger towards the status quo in Washington," and that although Trump was not here to fire the assembled, he was "here to fire you up."

But attendees were far from impressed.

On the same stage where, hours before, Graham had challenged his own party on the issue of climate change and called for consensus on the European refugee crisis, Trump lectured the assembled on whether his campaign rhetoric had really divided the country. "In the spirit of problem-solving," asked one attendee, "I'm wondering if you're at all concerned that some of your divisive language you use on the campaign trail undermines your ability to solve problems."

Trump did all but snort in response. "I went to Ivy League schools! I know what's divisive, I know what's not divisive," Trump replied derisively, if not divisively. "I see politicians, they're afraid to say anything because it's not politically correct."

In the span of roughly 40 minutes, he also managed to criticize former Florida Gov. Jeb Bush and sitting Florida Sen. Marco Rubio by name, called out fellow convention speaker Graham as being "nasty" to him, and excusing his political and personal attacks as being what voters want to see in a commander in chief.

"I don't think anybody in this room wants to have somebody who's not going to fight back," Trump said to the relatively quiet audience. "We have people now who don't fight back, the country has been hurt tremendously."

Trump's antagonism wasn't just reserved for his primary opponents — members of the audience were on the receiving end of the candidate's brusk, often condescending remarks. When an Asian-American student in a Harvard University sweatshirt questioned previous statements Trump had made regarding South Korea, Trump interrupted him.

"Are you from South Korea?" Trump asked.

To which the student, visibly uncomfortable, replied, "I'm not. I was born in Texas, raised in Colorado."

The limits of Trump-mania? While Trump's braggadocio and condescension may energize the conservative audiences at his well-attended rallies, his tone was at serious odds with the moderate, diverse (for New Hampshire) crowd at the convention. Interspersed with college students, middle-class baby boomers and well-informed older voters, the convention was a microcosm of the kinds of voters the eventual Republican nominee will need to woo in order to win.

But as the audience's patience with Trump's shtick wore thin, and as he faced a series of increasingly confrontational questions, it was hard not to wonder how much damage his posturing has done to his broader appeal. Although Trump, perhaps borrowing the vocabulary from a nearby poster, told the audience that he wasn't opposed to cooperating with his political enemies — "I like the word compromise; let's compromise and win" — the negative tone of his appearance may be proof that, for once, Trump might not be able to talk his way out of trouble.

The loudest audience reaction to Trump's presence didn't occur until after he had made his exit, when Gaye Fedorchak of Gilford, New Hampshire, urged reporters to focus on the convention's "real" speakers.