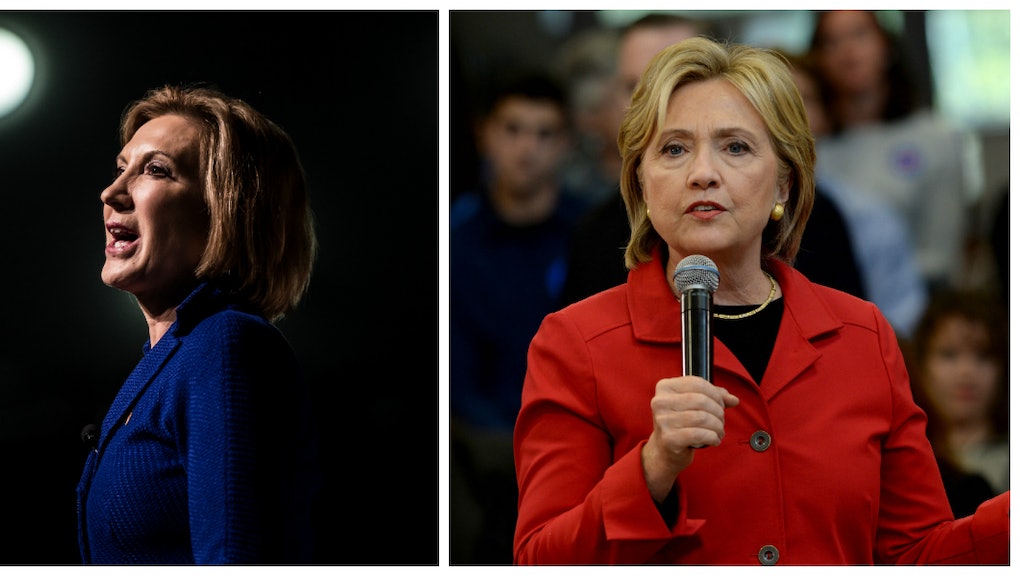 Op-Ed: #AskHerMore Worked on the Red Carpet. It Can Work for Presidential Candidates, Too.

On Jan. 20, 2017, there is a chance the United States will inaugurate its first female president; a 240-year win in the making. And while the voters will elect the next president, we know from history that media coverage and bias play a huge role in shaping those votes.

What democracy looks like in 2015: While you could spend the next few months, perhaps even years, trudging through the sexist political coverage customary for woman presidential hopefuls Democrat Hillary Clinton and Republican Carly Fiorina (pantsuits, ageism, grandchildren, oh my!), you would be hard-pressed to find an equal sampling of gendered scrutiny targeted at male contenders. One might offer that this is because there have been so few touch points for American political women's leadership. Keep in mind, in the United States' 239th year, only 19.4% of the members in the House of Representatives, and 20% of those in the Senate, are female, according to the Washington Post. Still, isn't it fair to say we've already seen enough to know better? This election cycle is not only our chance to vote our values as they relate to true democracy, real equality and women's rights, but our chance to hold our political system, our media and ourselves accountable.

To move forward, we need to push back when women are asked a disproportionate number of questions about their appearance, families and ability to balance it all, rather than about the issues they are campaigning on. It's imperative to have a zero-tolerance policy when individuals — including other candidates, policymakers and media operatives — demean them. And we must ensure that in the media coverage following the debates, not just during, the guests asked to speak include the types of diverse voices mirrored in our day-to-day lives.

Often, that coverage determines both the media and national political conversation. By shutting out women and people of color from this national conversation, we all suffer. Why? Because when a significant portion of our population's perspectives are diminished or left out of the conversation, we don't get the entire story. To be clear: Continuing to cover candidates in the same reductive ways we've done in previous decades will guarantee the same homogenous governing body we've had since 1789.

So, what does fair and balanced coverage really look like?

#AskHerMore: We looked to the Representation Project, which inspires individuals and communities to challenge and overcome limiting stereotypes so that everyone, regardless of gender, race, class, age, sexual orientation or circumstance, can fulfill their human potential. Having recently witnessed how the project's #AskHerMore campaign changed the conversation on the red carpet while holding media accountable at Hollywood awards shows like the Oscars, for the glaringly different ways reporters engaged male versus female talent, we all agreed: Why not use the same approach now?

Starting this Tuesday, we urge each of you to watch the first Democratic national debate, to call out sexist and misogynist reporting and to suggest ways to refocus women's achievements using the hashtag #AskHerMore. (Unsure what to look for? Check out this fantastic guide from the the Women's Media Center on Gender Neutral Coverage of Women Candidates and Politicians.) In fact, we urge you to continue using #AskHerMore in all Republican and Democratic Debates and coverage moving forward.

This isn't about partisanship, or endorsing any given candidate. It's about making room, holding space and blazing trails — in partnership with you — toward systems that value and model equality. Because if we want things to change, and if we want women to lead us into the future, what other choice do we have?