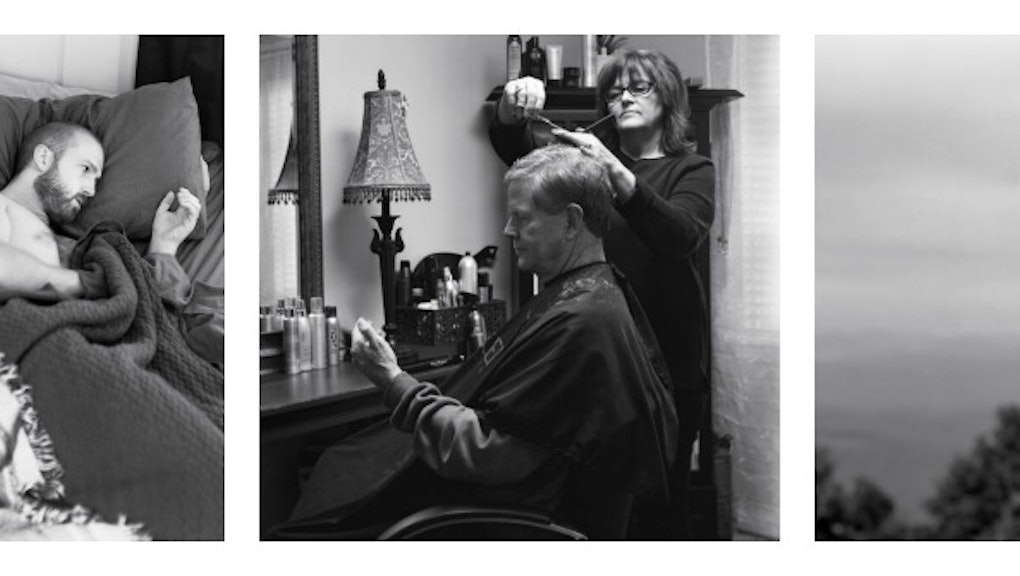 Eric Pickersgill has a problem with your iPhone.

As a photographer, he often looks at the medium itself and the ways in which it affects our lives. But for his latest project, "Removed," he chose to cast this critical light on everyday technology instead.

As he writes on the project's website, Pickersgill thinks of personal devices — smartphones, tablets and the like — as "phantom limb[s]." He's worried about their pervasiveness, their power and their potential to become so entrenched in our lives that they become second nature, like breathing or blinking.

"The joining of people to devices has been rapid and unalterable," Pickersgill writes. "We have learned to read the expression of the body while someone is consuming a device, and when those signifiers are activated it is as if the device can be seen taking physical form without the object being present."

"Removed" is a series of portraits of everyday people — families, workers, friends, couples — in perfectly ordinary situations. They're in bed, at work, at the dinner table, at home, in public or in the car. They're also holding onto something that's not there.

Each of his subjects is pose as if they were looking at a smartphone or tablet — except in Pickersgill's world, their hands are empty.

"They are asked to hold their stare and posture as I remove their device, and then I make the exposure," he writes. "The photographs represent reenactments of scenes that I experience daily."

The inspiration: According to Pickersgill, the idea for the project sprouted out of an encounter he witnessed firsthand.

Family sitting next to me at Illium café in Troy, New York, is so disconnected from one another. Not much talking. Father and two daughters have their own phones out. Mom doesn't have one or chooses to leave it put away. She stares out the window, sad and alone in the company of her closest family. Dad looks up every so often to announce some obscure piece of info he found online. Twice he goes on about a large fish that was caught. No one replies. I am saddened by the use of technology for interaction in exchange for not interacting. This has never happened before and I doubt we have scratched the surface of the social impact of this new experience. Mom has her phone out now.

In an email to Mic, he explained that his photographs were intended to illuminate rather than prescribe.

"I'm not attempting to tell others what to do with their time," he told Mic. "I'm just hopefully offering up a moment of realization much like the one that I experienced in the cafe at the onset of the project."

Though the project can reasonably be seen as a denunciation of our tech-obsessed culture, he's also adamant there's more to it than that.

"The work is not to damn the use of devices, although I think many of us have that feeling regularly," he argues on the project's blog. "I know its importance as well as its disfunction and, like many, operate in that odd dissonance that humans are capable of achieving."

It's difficult — impossible, even — to come away from Pickersgill's photos without feeling a little sad about the devices in our pockets. By and large, the expressions on the faces of the subjects are bland, unfocused and apathetic, and the dreary black-and-white tones don't do much to help things. Even when they subjects are smiling, there's a distinct feeling of emptiness permeating the shots, which is precisely the point.

The criticism: There's a problem with phone-shaming. Chalking up smartphones and tablets to soul-sucking black holes of isolation is reductive when we know what people are accessing on their mobile tech: a wealth of knowledge and new avenues for authentic social interaction. Pickersgill's photographs reveal none of the importance he mentions in his defense, only the dysfunction. In "Removed," smartphones and tablets are akin to Lady Macbeth's damned spot. Even when they're not in our hands, they're still there, permeating every millimeter of our consciousness with their existence.

Of course, harping on the antisocial nature of technological communication isn't new. The same knee-jerk reaction to mobile tech has been trumpeted by everybody from the New York Times to the Wall Street Journal to the American Psychological Association. As John Herrman wrote for the Awl in July, these arguments leave out a key characteristic of smartphones and tablets: They're actually not that different than other, more socially acceptable forms of distraction.

"[W]hat's happening on all these screens is not ... an endless braindead Candy Crush session, but a rich social experience of its own. That screen is full of friends, and its distraction is no less valuable or valid than the distraction of a room full of buddies or a playground full of fellow students. Screen Addiction is, in this view, nonsensical: You can no more be addicted to a screen than to windows, sounds, or the written word."

The difference, of course, is that devices are new and relatively untested, thus leaving them wide open to hand-wringing and vapid cultural criticism.

Smartphones and tablets may not be perfect — nor are they completely harmless — but they're also not the villainous tools these critiques make them out to be.