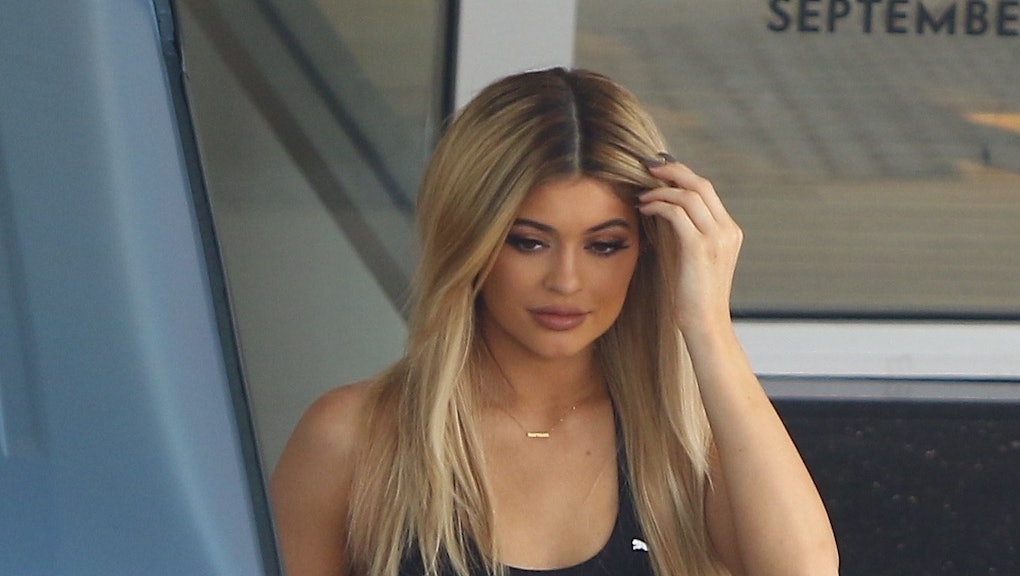 Kylie Jenner might be the youngest of the Kardashian family, but her following on social media rivals that of her famous sisters, whose oversharing tendencies have made them our most ubiquitous celebrities. With 39 million  followers on Instagram, anything Jenner photographs, tweets or Snaps is bound to be seen.

That includes her Spanx. Last week, the 18-year-old posted a Snapchat photo of her famous lower half, with the caption, "These new Spanx are bomb. From Target." Oh, and a "thumbs up" emoji.

Previous Jenner selfies, not to mention paparazzi shots, had her fans wondering whether she was wearing butt pads or had plastic surgery to enhance her tush (an allegation her sister Kim Kardashian has vigorously defended herself against).

Jenner's Snap revealed it was shapewear — ever-popular Spanx, in fact — that gave her a boost. Some of her followers were critical, while others praised her for her honesty in admitting her love of a product that has had booming sales over the years. They went viral, even trending on Facebook.

Regardless of what people thought, Jenner's oh-so-casual tweet functioned as a public service announcement. If her followers on social media wish to get a derrière — not to mention a tiny waist and perky chest — like hers, they need only purchase Spanx.

If it's in our feeds, you can bet we're trying it: If there's any question about the effect of celebrity body "trends," look no further than waist trainers, the corsets that have come into fashion thanks in large part to Kardashian.

When Kardashian shared a photo of her wearing a waist trainer at the gym and credited it for her voluptuous shape, she set off a waist-cinching trend. Other celebrities known for their curvy shapes followed; Amber Rose, Lala Anthony and Nazanin Mandi have all been photographed in the waist-cinching contraption. Jessica Alba even credited the modern-day corset with helping her regain her body post-pregnancy.

Beauty writers tried on waist trainers to judge their efficacy, while health writers wrote about the possible organ-squeezing effect of waist trainers. Heck, there's even the "corset diet." It didn't take long for women (and companies) to start posting about them on social media. A search on Instagram for the hashtag #waisttraining yields more than 530,000 posts.

The end result was a larger audience talking about teeny waists in a way that made them relatable and aspirational.

The body image messages often conflict: The hourglass-shape body ideal for women is a deeply rooted, centuries-old fascination. Today's cultural fascination with teeny waists and a hourglass figure is too embedded to blame solely on Jenner, Kardashian or any one celebrity. But having a massive audience on social media amplifies their viewpoints and adds weight to their actions.

That can have a major ripple effect for young adults, as their spheres of influence can ultimately negatively impact the body images of the young girls who idolize them. Teens are already susceptible to cyberbullying, "Facebook depression" and the increasingly magnetic pull of social media — which means there are ample opportunities for girls to compare their own appearances to everyone else's in their feeds.

"The more time spent on Facebook, the more likely people are to self-objectify themselves," Phillippa Diedrichs, senior research fellow at the University of West of England's Center for Appearance Research, told the BBC.

On Instagram, the potential for scrutinizing the human body is arguably even greater, the New York Times' Vanessa Friedman wrote.

"It makes sense, after all, since body image, while a psychological issue, begins with optics, and Instagram is first and foremost an optical platform," Friedman wrote, adding that Instagram may actually have "potential as the fulcrum of the national conversation on size and health."

"Body image, while a psychological issue, begins with optics, and Instagram is first and foremost an optical platform."

Using social media for good: That fulcrum can be leveraged for good, as the body-positivity movement is doing with the power of trending hashtags for campaigns filled with self-love messages. One of the most popular hashtags is #EffYourBeautyStandards, created by plus-size model Tess Holliday after she experienced bullying on Tumblr and now has 980,000 tagged Instagram pics and counting. Lane Bryant launched the #PlusIsEqual campaign featuring six plus-size models to promote the idea that beauty comes in all sizes.

But social media can also be the place we end up feeling worse about the bodies we have. At their core, waist trainers and Spanx like Jenner's send the message that the female body can be corrected, smoothed and contorted into any idealized image — in short, that your body isn't quite perfect just the way it is. In fact, it might be due for a change.

Spanx can be pretty much magical, as so many women know. But no one needs them to be beautiful or selfie-worthy — and that's a message worth spreading on Snapchat.