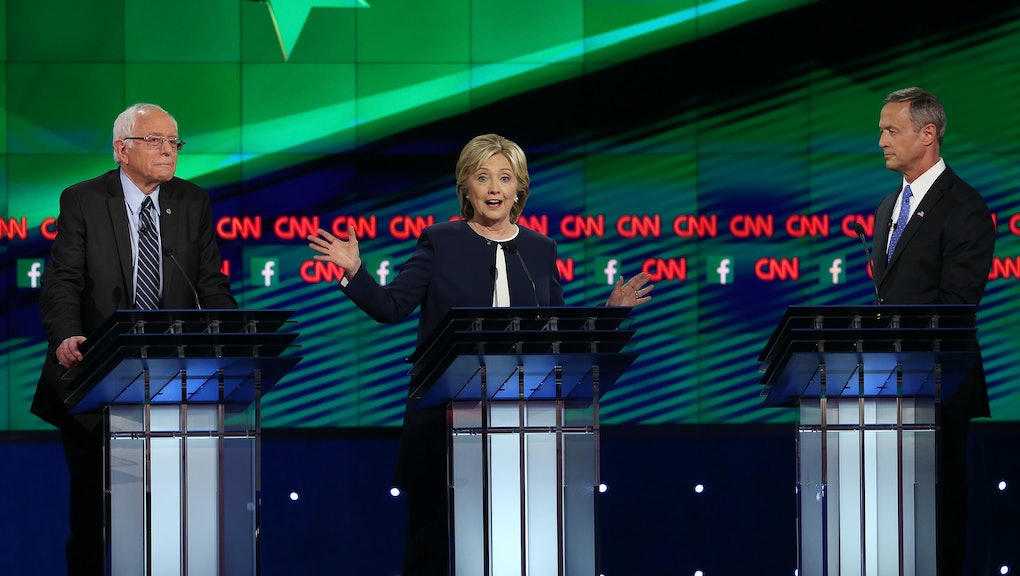 Las Vegas — More than seven years after Hillary Clinton's final debate with then-Sen. Barack Obama, she returned to the stage Tuesday night and proceeded to deliver the commanding performance her campaign and supporters had been thirsting for after a difficult summer and increasingly anxious early autumn.

Over two hours in a packed debate hall at the Wynn Las Vegas hotel, Clinton delivered a rhetorical master class. She was by turns passionate, witty and, when the opportunity arose, ruthless. Like a smiling assassin she thanked former Maryland Gov. Martin O'Malley, her most vocal Democratic critic in recent weeks, for his endorsement in 2008. For her chief rival, Sen. Bernie Sanders (I-Vt.), Clinton came prepared to seize on his fuzzy positions on gun control. After Sanders struggled to inject some nuance into his decision to vote for a bill to shield gun makers from litigation, Clinton pounced.

"I was in the Senate at the same time," she said. "It wasn't that complicated to me."

Clinton was under pressure from the opening minutes, but never seemed flustered. Her canned lines played well with the friendly crowd of 1,300, and her ability to read the tone of the discussion betrayed a political talent which is sometimes underestimated.

In the simplest terms, Clinton strode onto the debate stage in Las Vegas with everything to lose and a track record for doing just that. She left it with a campaign apparatus at peace, with top aides visibly delighted at their boss' showing and the panic it had put to bed. For this night, at least.

Holding the line: Though Clinton was the consensus winner among the press corps and political operatives — "She ate them for lunch," one Democrat emailed as the candidates delivered their closing remarks — no one should expect an immediate reversal in the polling trends that show Sanders gaining ground on the longtime front-runner.

For Clinton, especially at this early stage in the process, success is simply maintaining the current state of play and giving comfort to her preternaturally angsty allies and donors. Sanders' missteps aided that effort. He may be an experience debater, but this was his first appearance in a charged, nationally televised forum. Still, his passionate loyalists are not about to submit to the inevitable anytime soon. Sanders might have played second fiddle to Clinton at the Wynn, but the upstart independent played it professionally.

In an ironic turn, Sanders' most memorable moment, the one that earned him such hearty applause from inside the hall, came in defense of Clinton. Thanks to a game-changing gaffe from House Majority Leader Kevin McCarthy (R-Calif.), who boasted on Fox News late last month that the select committee investigating the deadly 2012 attack on the U.S. compound in Benghazi, Libya, was being used as a tool to drive down Clinton's poll numbers, she was able to convincingly state her desire to testify before the beleaguered panel. But moderator Anderson Cooper pressed on — he wanted more from Clinton on her decision to use a private email server and account during her time as secretary of state.

Before Cooper could prod any further, Sanders intervened.

"Let me say this," he said. "Let me say something that may not be great politics. But I think the secretary is right, and that is that the American people are sick and tired of hearing about your damn emails."

Clinton's relief was sincere and apparent. "Thank you," she said to Sanders. "Me too, me too." The crowd ate it up, and Clinton, sensing the moment, leaned in for a gracious handshake. Expect to see a lot more of this clip when and if she earns the party's nomination. She needs the energy, to say nothing of the votes, that Sanders remains a lock to corral as the primary season progresses. This is a good look for both of them.

Beating up on the field: In the ebb and flow of the debate, there were a few notable cameos by the former Rhode Island governor and senator, Lincoln Chafee, who at one point volunteered to describe himself as a human "block of granite." If the assessment was odd, his freelance attempts at challenging or impugning Clinton were more traditionally unsuccessful.

After boasting at the outset that his 30-year record in political life counted "no scandals," Chafee doubled and tripled down on his argument that Clinton's past judgments — namely her vote to authorize the 2003 invasion of Iraq and the decision, years later, to go home-brew for her State Department emails — should disqualify her from winning the nomination.

His first foray came a few minutes after Sanders offered her an out on the email conversation. Understandably dissatisfied, Cooper prodded Chafee into picking up the thread, and he duly obliged. Asked to respond, Clinton said acidly, "No." Again, she had read the moment perfectly — Chafee was ripe for a plucking, and gave him one, in one syllable.

On the Iraq question, Clinton turned a neat, logical pivot that instantly quieted his criticism. "I recall very well being on a debate stage, I think, about 25 times with then-Senator Obama, debating this very issue," she said, before dropping the hammer: "After the election, he asked me to become secretary of state."

The "real" Hillary? The search for the mythic creature known as "the real Hillary" has become a theme of Clinton's post-Senate career. Her aides swear by her personal warmth and abiding loyalty, but the public outside a considerable base of devotees has remained skeptical, if not outright hostile.

Part of this is a natural byproduct of having spent so many years in the crucible of national politics. One is bound to make enemies. When asked Tuesday which of them she was most proud to have, Clinton threw out a handful of suggestions, but ultimately settled on, simply, "the Republicans."

But the night also allowed room for more nuanced machinations. Again here, Clinton met the task with a veteran's guile. When asked by Cooper if she considered herself a "moderate" or a "progressive," Clinton responded without hesitation: "I'm a progressive," she said, then added after a beat: "But I'm a progressive who likes to get things done."

In 13 words, Clinton articulated the core rationale of her primary campaign. Though she may be tilting left to keep in step with the increasingly liberal party orthodoxy, this is a candidate who has consistently argued for pragmatism in governance. The late former New York Gov. Mario Cuomo said politicians "campaign in poetry; you govern in prose." For Clinton, it's prose all the way through. When faced with a generational figure like Obama, like she was in 2008, those shortcomings were magnified. Sanders, for all his unique talents, doesn't have that kind of juice.

Given this, what transpired on the debate stage hardly represents some radical shift in the underlying dynamics of the race. The voting is still months off and the polls in a number of early-voting states will continue to tighten. Sanders did himself little harm Tuesday night, and might even see his favorability numbers go up after his warm embrace with Clinton went viral.

Where Clinton is the undeniable winner leaving Las Vegas is within the vast concentric circles of her own campaign. A poor performance might have endangered the modest detente that has so far prevailed among the new guard, headed up by campaign manager Robby Mook, and the Clinton lifers — old friends, aides and far-flung associates who have been known to sweep in and create more trouble than they might have initially found.

That lot will enter the next leg of the campaign content and, for the time being, quiet. "Hillaryland," to the use the insider shorthand, will enjoy at least a week or two of relative peace. For that, they have the candidate to thank.